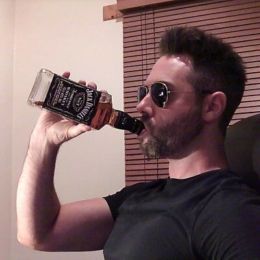 As autumn creeps closer, I find myself staying indoors more and more often. As the dreaded date of my birthday approaches, I shed much of my natural vim and vigor and run the risk of giving in to despair as an aspect of sloth, a sin I’ve not yet learned to overcome. Modern technology has many temptations, but the temptation to just sit there and “veg out” — which apparently means to attain the mentality of a vegetable — in front of the computer or television is one of its most insidious, as it usurps what should be the brain’s downtime and uses it to insert programming of various types when we’re too tired to activate our skepticism. They’ve invaded what should be our relaxation time and are using it to poison us. For this reason, I only really “veg out” with either really old music or ‘80s and ‘90s anime.

Recently, however, I’ve been watching something different: a stereotypically drink-sodden violent Glaswegian podcaster who calls himself The Critical Drinker [2]. He drinks and then talks about movies. He’s got that winning combination of exotic charm, cantankerous cynicism barely concealing a romantic disposition, a believable and beloved persona (everyone loves a drunken Scotsman), and even a snazzy catchphrase (“That’s all for today, go away now”). There’s the sense that you could run into this guy in a pub and he’d harangue you about the way modern movies stink with the implied threat of a violent altercation involving knives should you attempt to pick yourself up from your barstool and leave before he’s finished. To alienated Westerners living via their computer screens, there’s something about the image of the hard-drinking, down-to-earth chap from the British north that’s more authentic. (For another, explicitly dissident example of the charming lads oop norf, go no further than the Geordie himself, Morgoth of Morgoth’s Review [3].)

Sometimes, The Critical Drinker will rewatch a classic film and recommend it. Here he is reviewing Event Horizon [4], declaring it an excellent movie. I tend to agree with him, and compounding my sloth with pride, as soon as I saw that video, I rushed to reread my very own review of Event Horizon [5]. In the comments, I found a recommendation to check out The Critical Drinker’s review of the same film. Had I listened to my erstwhile audience, I might have discovered The Drinker a year earlier.

On other occasions, The Drinker will eviscerate a modern movie, criticizing them not just for woke content but also for their sloppy writing, overwrought CGI and action scenes, and their formulaic nature. He does a good job outlining what he believes is wrong with modern storytelling in this video [6]. Rarely, he’ll declare a modern movie good and admit he likes it. Here he is gushing over Joker [7].

From the asides, jokes, and groans about wokies inserting politics into entertainment, we can tell that while he is not entirely with the dissident program, The Drinker is probably not anti-white or anti-male, and could be considered a potential fellow traveler. Furthermore, he’s invited Count Dankula on his stream [8], which to a Leftoid antifa journalist makes him a literal Nazi fascist, but it’s good to keep in mind that Count Dankula is a regular on Milenniyule who’s proven himself to be not at all allergic to dissident thought, even if he is himself a libertarian. In this sense, The Drinker is a mere two degrees away from literally Hitler (Millennial Woes). I don’t want to read too much into that, but it’s nice to have a prominent media figure who doesn’t throw rocks at us.

All in all, it’s a happy story, more or less: Aging millennial Nick Jeelvy takes time out of his busy schedule to sit in an armchair, watch The Critical Drinker on a cool day in early fall, and “veg out,” as the kids say, allowing the dulcet tones of the Glaswegian dialect to wash over him as he edges ever closer to the dreaded age of 30. He chuckles as The Drinker makes a quip about being an alcoholic, remembering that he was a pretty heavy drinker himself not six months ago. But why am I bringing it up in this august publication, and how is it relevant to the dissident cause?

If you listen to The Drinker long enough, you find that despite his entertaining and insightful way of thinking about, analyzing, and critiquing film, there’s a sort of futility to what he does. Yes, what he does is beautiful to watch, and the art of just taking the piss out of something is a rare one these days. I’m sure he makes a pretty penny from his online presence. But what is the greater benefit, both to society and to The Drinker’s personal self-actualization, in doing so? You get the feeling that sometimes he’s not joking about drinking himself to death, because that’s increasingly the only way out. Movies are bad and they’re gonna get worse. The culture is toxic and it’s gonna get worse. Dumb-ass monster movies from 30 years ago look profound by comparison. Our civilization seems to have lost its ability to tell stories. There’s nothing original in Hollywood; it’s endless reboots and formulaic capeshit. Besides which they can’t even paint by numbers right. Modern cinema is simply crap. Modern music is worse. Every other art form is complete wankery. And all The Drinker and his compatriots can do is document the decline, complain about it, and drink. To keep watching these movies, even as they get worse, even if it is only to criticize them, is to lead a life of constant humiliation, because ultimately, it’s your culture being dissolved, mocked, inverted, and made toxic before your very eyes. The only thing that you can do to keep your sanity is disengage.

I wrote “In Defense of Echo Chambers” to refer to political ideas, but cultural production also requires an echo chamber. If we are to produce good and healthy culture, we must abandon the degenerated and empty forms of modernity. Indeed, a good artist must find himself insulated from them lest they disrupt and pollute his creative process (and modern culture seems almost designed to disrupt and pollute the creative process). A mere critique of modern culture is no longer necessary for us; everyone knows it’s shite, even the bugmen pretending to enjoy it. The problem is that culture, especially movies, cannot be changed from the demand side. The suppliers dictate what shall be consumed [11], and consumed it is, because there is no alternative (they’ve blacklisted everyone who can provide an alternative). If we are to claw our way out of this hole, we have to stop being angry at Hollywood’s excreta, and we can only do that by disengaging from it entirely.

However, this does not apply to The Drinker himself. I would keep him where he is, because someone needs to keep an eye on the mainstream and point out that it’s all fake and gay. Someone needs to wear the jade-colored glasses and barely conceal the sadness and rage that the modern culture of wankery has made inevitable. Someone needs to point at the steaming pile of shite we’re told is high art and say, “This is a steaming pile of shite” in a raspy Glasgow growl. Someone has to eat the sorrow of the dying culture and wash it down with cheap whisky, as the old sin eaters took the burdens of the village upon them.

The Drinker is that guy. He’ll likely drink himself into an early grave for it, but there is something genuinely tragic and heroic about being the rearguard who remains trapped behind enemy lines so that the rest of us can disengage and start creating something beautiful. I can only hope that one day we are strong enough to come back for him.