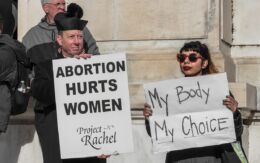 That idea was horrific to conservatives, and Hanania was promptly “ratioed.” His tweet became the basis for numerous conservative media hitpieces [3] and Twitter dunks. Several conservatives displayed pictures of their Down’s syndrome kids to shame the academic. Others called him a Left-wing monster. Radio host Jesse Kelly, who occasionally ventures into forbidden territory on race, said Hanania’s tweet is further proof of why conservatives should embrace secessionism [4]: They just can’t live with eugenics-supporting liberals.

The most notable reaction came from South Dakota Governor Kristi Noem in a FOX News segmen [5]t. (Yes, FOX News did a whole segment about one guy’s tweet.) Noem emphatically stated that the tweet was “evil” and insisted her state stands against eugenics.