A newly-released statistical study by Charles Gaudreault published in a peer-reviewed journal has concluded that the ethnic French Canadians will become a minority by the year 2042 in their Québec homeland. The title does not sound alarming: “The impact of immigration on local ethnic groups’ demographic representativeness: The case study of ethnic French Canadians in Québec [2].”

But don’t let the complex statistical technicalities of the study and its cold neutrality distract you from the momentous political and cultural implications of its conclusion. The ethnic French Canadians, the major ethnic group responsible for laying the foundations of the Canadian nation during its first two centuries, is set to relinquish its sovereignty over its Québec homeland.

No one in the mainstream media will say a word about it. They want you to think that an ideological program initiated from above a few decades ago is just the natural progression of a culture that was always about “diversity born in immigration.” This is a lie promoted by academics, journalists, politicians, and bankers to justify the ethnocide of Euro-Canadians.

The reality is that from the time of Samuel de Champlain’s settlement in Québec in 1608 up until the conquest in 1763, immigration contributed only one-seventh to the total population growth of New France. The immigrants that came were not diverse. After the conquest, Québec received American-British loyalists, and during the 1800s immigrants arrived from the United Kingdom and Ireland, but non-European immigration was almost non-existent. The population continued to increase at an accelerating rate, from 70,000 in 1763 to 890,000 in 1851, mostly due to the continuing high fertility rate of the Québecois. From the 1660s through the 1800s, women had 5.6 surviving children.

The ethnic French Canadians are a unique people newly-born in the cold soils of Québec in conditions of immense hardship, through their own hard labor and procreation. By 1950, the Québec population reached 4 million — with next to zero immigration. The post-1960/70s high levels of immigration were an abrupt break with Québec’s history.

The insane levels of immigration we have been witnessing in the last three decades are part of a concerted effort to destroy the national identity of the Québecois and transform the province of Québec into a place of rootless, race-mixed humans with no loyalties to anyone other than to generic global corporations. 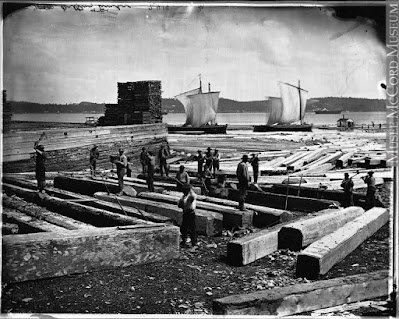 Working with timber in Québec City, 1872

The immigration-induced demographic transformation our globalist elites have imposed upon Québec is pure ethnocide. The Québecois do not exist as a people anywhere else on the planet. Once their homeland is taken over by foreigners, they will cease to be a people. Meanwhile, the national cultures of the immigrants arriving today, the majority of whom are from Africa, will continue to thrive.

They say the great replacement is a “conspiracy theory.” The scientific evidence, however, decisively supports our claims. Charles Gaudreault’s paper is thoroughly backed by copious amounts of data. Here are some key findings stated in almost the same words used by his paper:

This article [6] originally appeared at Council of European Canadians [7].