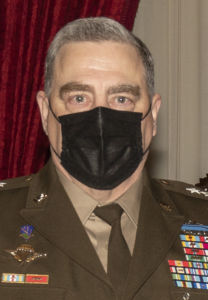 Among the many problems in the Inept American War Machine is Chairman of the Joint Chiefs of Staff, General Mark Milley. It was recently revealed in a book by Bob Woodward, Peril, that Milley had contacted senior military officials in China during the final months of the Trump administration to assure them that he would warn them should then-President Donald Trump order a sudden attack. Furthermore, Milley had more than one conversation with the Chinese on this matter. This all took place at a time of increasing tensions between the United States and China.

General Milley should immediately be fired for this and other reasons, including an obvious lack of judgement, carrying out an ill-advised and partisan anti-“extremism” training stand-down, and encouraging a culture of military failure and lies.

The fact that Bob Woodward was given this information at all demonstrates an extreme lack of judgement. Talking to Bob Woodward[1] [2] is like going on a daytime TV show to take a paternity test and expecting to be treated in a respectful way.

Milley’s lack of judgement was also on display in his failure to understand the domestic political situation. The January 6 protest shouldn’t have come as a surprise. Whatever one thinks of the way the 2020 election was conducted, it was clearly volatile enough that one should have expected anger and protests. Furthermore, the sheer scale of support for Trump in the face of wall-to-wall media hostility shows that there are a great many Americans – millions, in fact – who don’t believe the press, the Democratic Party, or the bureaucracy. In such a circumstance, treading carefully should have been the order of the day.

It was also simply idiotic to believe that Trump would suddenly sling nukes at China or any other nation without cause.

General Milley should have been sacked during the Antifa/BLM insurgency of summer 2020. Much property and many lives were destroyed by mobs throughout this period, and Milley did everything in his power to keep the American military from restoring law and order. Deploying troops to quell race riots is not unusual or unconstitutional. America is poorer today because of Milley’s insubordination and treachery.

Then we have the recent Department of Defense “extremism” stand-down. Essentially, the whole of the American military’s bureaucracy held a day of anti-extremist training. This event was a divisive disaster, of course, but it is important to note here how poorly thought through the training’s overarching philosophy was. The word “extremism” itself is a loaded term, like “cult” or “demagogue.” They have negative connotations, but no real meaning. What is the difference between a “cult” and a “religion?” What exactly is “extremism?” Is there an ideology behind it? It is an empty description for the imaginary domestic enemy of the American Empire of Nothing.

Implied in the “extremism” training was the idea that whites are evil. This was shown when General Milley discussed “white rage” at a Congressional hearing. Strangely, Milley doesn’t recognize that whites have done approximately 75% of the dying in the two decades of war since 9/11. How does Milley think this is going to be perceived by the broader public? Again, his lack of judgement is astounding.

Part of this is the natural result of the American military’s equal opportunity culture that papers over the problems of integrating sub-Saharans into a white institution. Sub-Saharans as a group cause many disruptions, but these are denied by the institution. Those who best cover up these disruptions are promoted. Thus, America gets senior leaders who think that they have beaten back the second coming of the Gestapo while their African troops are carrying out drive-by shootings using military-issued rifles downtown.

The US Military: Failure & Lies

The collapse of the Afghan National Army showed the entire world that the US Department of Defense had been tolerating a culture of lies and failure for years. This didn’t start with Milley. The only notable thing that General David Petraeus did during his tenure as the military’s commander in Afghanistan during 2010-11 was to take a mistress. His mistress, Major Paula Broadwell, was a West Point graduate whose only notable accomplishment was demonstrating her loose sexual morals.

For his part, General Stanley A. McChrystal’s only notable accomplishments in Afghanistan during his tour in 2009-10 was to mount a counter-insurgency strategy that involved sending brave men to walk through minefields. On top of this, he was dumb enough to give an interview to a Rolling Stones reporter where he insulted several Obama administration officials, including Joe Biden. With leaders like that, the Fall of Kabul should not come as a surprise. General Milley is cut from the same mediocre bolt of cloth.

A Lightning Rod for Senile Joe?

The big question is, why hasn’t Milley resigned or been fired? There are probably several factors at work. The Senile Joe regime seems to be in deep trouble. When an administration is in trouble, they often find a person to become a lightning rod for the President. Milley can become that.

The Biden administration could also be keeping Milley around as bait. If Milley gets assaulted by a white male veteran, for example, the national narrative can return to “white rage” rather than military failure.

It is also possible that Milley sees the polarized political climate as a big opportunity. In such a climate, the military can become a Defense Department with a nation rather than what we are supposed to have: a nation with a Defense Department. Milley might imagine that he could become a military dictator, if circumstances are right.

Whatever the case may be, Milley doesn’t have the best interests of the United States at heart.

[1] [5] Bob Woodward is the journalist who “uncovered” the Watergate scandal that took down President Richard Nixon. To some, Woodward might seem like a heroic teller of truth to power, but he only really enabled a disgruntled FBI agent named Mark Felt to pull the trigger on the FBI’s longstanding threat of “getting” an elected politician so the FBI could increase their clout. The FBI has been spying on American politicians since the 1930s. Felt had been passed over for the top spot and wanted revenge. Nixon didn’t do anything that JFK or LBJ hadn’t also done.