The Unfathomable Sadness of Keyboard Sadism 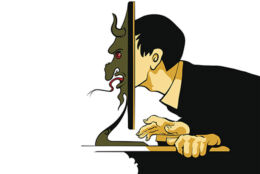 I’ve been accused of trying to offend people ever since I started writing, and it never rang true to me. Hurting other people’s feelings is not my motivation; discovering the truth, no matter how unpalatable it may be, is what drives my writing. I understand that some people will get offended, but I don’t understand why. Whether or not they get upset is incidental. It’s also entirely their choice.

This is why, about a dozen years ago, I needed someone a wee bit younger than me to explain the concept of “trolling,” because it was something I couldn’t comprehend.

Perhaps it’s because I come from an era where people predominantly interacted in person rather than digitally, where people could see — and punch — the face from which the words issued, an era where your words were backed up by your identity and your willingness to bang fists to defend them, an era where no one hid behind black glass screens to endlessly poke at people, that I simply couldn’t process the level of emptiness, sadness, and dishonor required to get pleasure out of anonymously annoying others.

Before anyone starts yipping at me about why anonymity is required in the current climate, spare me. I’ve heard all of the arguments before, and I’ve swatted them down with ease.

I’ve seen the defenders of anonymity say that the Founding Fathers used surnames. Sure, if you’re trying to topple the power structure, there’s an argument for hiding your identity, but I don’t see many of the Huddled Legions of Anonymity sharing nuclear secrets or attempting to reveal exactly what the CIA’s budget is and what they do with it. And I don’t recall Alexander Hamilton using a pseudonym to write, “The King’s wife has herpes LOL.” There’s a huge difference between a whistleblower and a crank-yanker, and nearly all of the anons fall into the latter category.

There’s also the tired “I have bills to pay” argument. Yeah, so do I. There’s hardly one day a month, including weekends, where I’m not working to pay my bills. Neither that, nor imprisonment, nor endless public scorn ever made me hide behind a screen name, though.

But if having bills to pay is more important to you than actually changing the world — if that’s what you’re pretending to do by endlessly chattering about politics — just admit you’d rather be comfortable than change the world and are fine with the status quo so long as you don’t experience any discomfort, because that’s exactly what you’re signaling by remaining anonymous. Simply concede that your temporal personal comfort is more important than changing the world in the long run. At least that way, you aren’t full of shit.

Be as anonymous as you want. But realize that by doing so, you relinquish the right to complain about “cancel culture,” because you’re enabling it. You also surrender the right to refer to people who don’t cloak their identity as cowards. It makes me strongly suspect that you want other people, the ones on the front lines who aren’t hiding, to take bullets before you become bold enough to peep out of your foxhole.

Now that I’ve swatted down that pesky fly, my main subject isn’t people who conceal their identity to avoid the negative effects of expressing opinions that may lead to unfortunate social circumstances because, y’know, comfort and social approval are more important than fixing what’s wrong with the world, no matter how many hours they waste per day bitching about what’s wrong with the world.

My main subject is the troll: the person whose life is such a gaping vagina of emptiness that their only pleasure comes from constantly trying to annoy people and then acting as if it’s some kind of moral and rhetorical triumph when people get annoyed at them.

Brazilians have a term for this type — pombos enxadistras (“chess-player pigeons”) — and an accompanying adage: “Arguing with so-and-so is the same as playing chess with a pigeon: It defecates on the table, drops the pieces, and simply flies off, claiming victory.”

A decade after learning about what a “troll” is, it’s still impossible for me to understand the thinking of someone who anonymously tries to annoy people, then counts it as a victory when they get annoyed. I’ve been through some hard times, but that’s a level of sadness I will never be able to fathom.

No one who is remotely happy, who is within 10,000 galaxies of happiness, does such things. In my loneliest moments, I’ve never needed attention so badly that I’d lash out into the darkness seeking negative attention from someone I’ll never meet and who has no idea who I am.

If you lose respect for someone merely because they turned around and paid attention to you, what are you saying about yourself?

From what I can tell, growing up online has not proved to be a character-builder for today’s young’uns. If anything, it has made them vastly more dishonorable than all preceding generations. I was already into my thirties before I ever so much as used a dial-up modem, but after more than a quarter-century of being online, I still can’t quite untangle the paradox of people simultaneously being more connected and more alienated than ever. The internet has served to nurture and amplify behavior that is simultaneously cowardly and sadistic because I don’t think the human brain is ready for this sort of almost-but-not-quite-real interaction with others. Online culture has only served to turn weaklings into bullies.

Well‚ cowardly bullies, which are a whole different breed. Bullies who never risk being hit back. The main problem with anonymity is the degree to which it allows people to harass others without repercussions.

At Oregon State Penitentiary — which, I can assure you, is a much more authentic environment than any chat room you’ll find online — we inhabited tiny cramped cells in five-tier cellblocks. The bottom tier was occupied by those in protective custody: the child molesters, snitches, and high-profile media cases who’d likely be shanked the moment they were released into the general population. And boy, did they spend all day and night taunting those on the tiers directly above them who had no ability to strangle them. That’s when I first heard the term “cell warrior.”

It was years later that I first heard the term “keyboard warrior” and realized to my horror that there was a life form even lower than the cell warrior.

“Oh, can’t take the bullying?” scoffs the person who can’t even handle their own identity being revealed. Talk about being able to dish it out and not take it! Who’s actually the fragile one if they can’t even bear their identity being known without fleeing for the exit with their hands covering their face?

To date, the most glorious example of a living human being taking vengeance against an anonymous troll is that of British boxer Curtis Woodhouse, who’d been taunted for months by a Twitter user who called himself “Jimmyob88.” Then one night after losing his English light-welterweight title — and being called a “disgrace” by his tormenter — he asked for assistance from his followers to find exactly where “Jimmyob88” lived. They helped him get all the way to the troll’s street, where he posted a picture of a street sign proving he’d found out where he lived, and Tweeted, “Right Jimbob im here. . . . Someone tell me what number he lives at or do I have to knock on every door #itsshowtime.”

Suddenly, Jimmyob88 was back in the real world. He quickly tweeted, “I am sorry it’s getting a bit out of hand. I am in the wrong. I accept that.” Woodhouse laughed and drove back home.

It’s astounding how much more respectfully people act when there are consequences for their behavior.

And it’s crucial to realize there’s a difference between words and behavior. Trolls hardly ever discuss ideas, which appears to be the purpose of the First Amendment; they simply hide behind a mask to insult people. But if someone blocks them on social media or bans them from a message board, they’ll whine about censorship all while reserving the right to censor their own name.

Cloak your sadistic little cowardly self all you want in the First Amendment, but what about the freedom to see who’s speaking — to face your accuser? That’s in the Sixth Amendment: “the accused shall enjoy the right . . . to be confronted with the witnesses against him,” but it only applies to criminal prosecutions.

I think it should apply to everything.

Either that, or bring back dueling.