The Tameness of Charles Murray 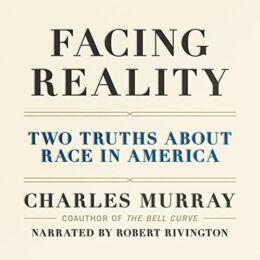 In his provocative book Facing Reality: Two Truths about Race in America, Charles Murray reopens a morass of unresolved controversies. At the heart of the dispute is the persistence of the black-white IQ gap and its consequences. With great erudition, Murray has reinforced the salience of racial differences in intelligence and criminality. Few mainstream outlets possess the audacity to review this contentious text, but the platforms that did so responded with either hysteria or flattery. Murray is a fascinating scholar, but based on the explosion in genetics, Facing Reality is rather tame.

Though in Human Diversity he sheds light on a broad array of racial differences, the truth is that old stories are being packaged as novel controversies. We already know that IQ predicts a wide spectrum of outcomes and that blacks are disproportionately represented in crime. Murray would have done much to illuminate our understanding of human diversity if he had written a book on racial differences in personality.

Facing Reality has some interesting tidbits, but discussing its content traps our thinking in the 1990s. At this stage, admitting the endurance of the black-white IQ gap is no longer controversial. In a recent interview, Dr. Russel T Warne revealed to me that the black-white IQ gap is one of the most replicated findings in psychology. Hearing this fact was unsurprising, because it has been explored in mainstream publications. A more pertinent issue is how evolutionary selections explain long-term disparities in intelligence.

Reports have shown that intelligence is genetic, but why some groups are more intelligent than others is a different question. For example, according to Rindermann et al (2012), haplogroups linked to cultural advancement centuries ago can accurately predict intellectual differences between countries in contemporary Europe. For transparency, I must disclose that I also interviewed Rindermann, and we correspond occasionally.

Most likely due to the infantile nature of modern culture, Murray cannot respond to pressing questions. Considering the issue of crime, Murray marshals data to show that the propensity of blacks to commit crime is greater across American cities. In Chicago during 2014-2017, blacks were 14.5 times more likely to be arrested for violent crimes, and 10.2 times more likely to be arrested in Charleston during 2015-2019. Missing from the analysis is the nexus between personality and criminal involvement. That blacks are overrepresented in crime is a well-documented finding, and so nothing new is gleaned from Murray’s presentation.

Of note is that low self-control predicts criminal behavior, and that relative to whites and Asians, blacks display less self-control. Self-control even implicates income and academic performance. How heritable is self-control? Questions of this nature are insufficiently addressed by Murray. Additionally, there are also racial differences in psychopathy, as discussed by Richard Lynn in a 2016 book. And like self-control, psychopathy influences many outcomes ranging from income to well-being. Interestingly, researchers other than Lynn conclude that blacks are more likely to suffer from psychopathy, even though the racial variance is small.

For the professionally offended, the shock value of Murray’s book is enormous. For thinkers immersed in intelligence research, however, Murray is an astute teacher unwilling to challenge an incurious class. But at least he is better than mainstream conservatives, who are unable to challenge their prejudices. Frequently, politically correct voices on the Right contend that the unfortunate state of black America is a consequence of broken homes. Indeed, family is important; however, that story is only partially accurate. Even when controlling for income and education, black women are still likely to have children out of wedlock. This could be attributable to differences in self-control and delayed gratification. Researchers seem afraid to touch the issue.

Yet one cannot expect blacks to form stable families if they are impeded from doing so due to certain traits. The truth is that intelligence, like personality, is heritable, and as such some ecologies select for traits that are functional in one environment, but maladaptive on a broader level. A case in point is that residing in a violent environment may force one to project aggression in order to deter attacks; however, corporate America, most especially in this era, will require more pristine behavior.

Furthermore, if we slightly agree with liberals and their conservative allies that black Americans are subject to more stress than whites, then the argument in favor of genetics is substantiated. One study argues that the exposure of black adolescents to stressors such as low parental investment and discrimination is associated with faster Life History Cognitions (e.g. tolerance of deviance and engagement in risky sex), which predicts reduced resilience at age 21.5.

Likewise, resilience has been revealed to be heritable, and a lack of it can induce susceptibility to psychiatric disorders and depression. Moreover, diminished resilience adversely affects income because it manifests in defeatism. People deficient in resilience lack motivation to succeed in the face of strife. Similarly, researchers submit that traumatic events alter a person’s life and can enable behavioral disorders that are transmitted across generations. In general, embracing cultural explanations for the plight of black Americans fails to vitiate the argument against genetics, since genes and culture interact.

On another note, readers of Murray’s book, like the author, are equally intrigued by the achievement gap, yet few ponder the extent to which culture drives the genetics of intelligence. Some black writers lament crass aspects of African-American culture by positing the bold claim that “ghetto culture” imperils the performance of African-American students. But as we established earlier, personality is quite heritable, so cultural theories are amenable to genetic explanations.

In a groundbreaking research paper, scholars articulated that, apart from intelligence, other facets of behavior such as personality and psychopathology account for genetic influence on GCSE scores beyond that explained by intelligence. In fact, combined with intelligence, these domains account for 75% of the heritability of GCSE scores. It therefore may be the problem that blacks are inheriting traits that are antithetical to educational attainment. Such an assertion is worth testing.

Facing Reality is a lucid analysis of racial differences in intelligence and criminality, though for the mature reader, it is merely an introductory class. Murray raises the right issues, but unfortunately, he refuses to delve into uncharted waters, thereby burdening the reader with a host of unanswered speculations.