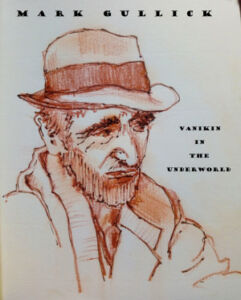 “It’s too late for teaching, past the hour where the transmission of the embers of knowledge could be fanned into the flames of wisdom, long gone bedtime for a drunk and absent humanity.” — Prof. Vanikin

This isn’t a book to add to your “reading list”; do yourself a favor and just go out — or online — and buy it now. As the advertisers used to say, you’ll be glad you did.

A disgraced philosophy professor becomes a recluse in a London council estate. But he is soon teaching again . . .

This seems a bit taciturn, but then Vanikin is a short book, which Constant Readers will know is my favorite format: the “dear, the blessed nouvelle,” as Henry James sighed, the Lovecraftian tale, the French bohemian’s recit. Within this tradition, with its title and room-bound protagonist of Russian descent (or “a veteran agoraphobic of Russian provenance”), Gullick must be invoking the spirit of Dostoevsky’s Notes from the Underground,[1] [3] although initially the prose; the tiny, gloomy room; and the boy who makes supply runs seem to be more appropriate to one of Beckett’s increasingly immobile narrators: “let’s not run before we can walk, or walk before we can crawl, or crawl before we have oozed from our mother’s great tented bellies.”[2] [4]

Here is Vanikin’s own summary:

I never could live with ghosts. Moved out [after my wife’s death], and moved in to the house of philosophy, wandering its corridors like an unquiet spirit, festering in the mired dung-heap that would eventually grow an academic fleur du mal that would lead to a death of sorts all its own, as I was defenestrated from my university. Then I went mad. Then I came here. The rest you know, gentle reader. Here to the underworld.

But his narrator is far from Dostoevsky’s spiteful midwit and proto-incel; a philosophy professor, indeed, and an initially prickly but ultimately humane chap you’d be glad to have as a neighbor. His “disgrace” came when his lament for the decline of the profession, The Decadent Turn, was handed to one Tara Barnes:

Barnes was one of those metropolitan Bacchae who prowl above the city of culture seeking whom they may devour . . . A Lovecraftian troll to look at, Barnes was given my book to review despite having no apparent knowledge of philosophy or any discernible academic background. She had written a book of her own, Bug-Chasing Bitches, which, I was reliably informed by the people who know about these things, was an account of American prostitutes who deliberately infect themselves with and further incubate the AIDS virus in their pharmaceutically maintained bodies for the benefit of sexual adventurers who actively seek to become infected with that particular disease. What pantheon is this? I was hardly peer-reviewed.

Thus was “a critical examination of academic theory . . . remade as a white supremacist tract, a racist screed, a tool of oppression. . . . All I had wanted to do was mourn philosophy’s passing by noting its gradual disappearance as the core of Western academic studies. How did I turn into Pol Pot?”

Turfed out with a reduced pension by his university, Vanikin — after a brief period of what he forthrightly calls madness —

I responded to this sudden earthquake of hatred and death threats and bile and scorching, scourging persecution in the only way I feel an Englishman could decently respond; I went mad.

— lands in a postwar Brutalist-style London housing project, the inexplicably or mockingly named “Europa House,”[3] [5] which has become a ruthlessly sub-subdivided rabbit warren[4] [6] filled with what seems to be the cast of the next Guy Ritchie movie,[5] [7] “a hothouse of psychological dysfunction”:

I feel a pollster would accept the place as a representative sample of what it is to be human in Great Britain and not to have very much money.

There he is now, shirtlessly grappling with some ancient lead fixture in the sweltering boiler room deep in the basement. His upper body is a patchwork quilt of tattoos, some professionally applied and some of more home-made provenance. They record past dalliances, the names of Craig’s awful sociopathic children, tribal affiliations in the world of association football, nationalistic aspiration, and mythical creatures, zombie overlords and full-breasted, broadsword-wielding vixens. Craig’s mental life is correspondingly crammed and chaotic, but he is grateful for the job of resident caretaker at Europa House. Indeed, the job was a godsend. Craig had had quite enough of his regular employment as doorman of various risk-laden speakeasies across the city. He had been stabbed and shanked, shivved and striped too many times to justify the money and drugs he received in payment for plying his precarious trade, and the caretaker’s role allowed him to exercise power without the accompanying perils of the order of clientele to which he had become used.

Here we diverge even more from the Underground Man, for the erudite and wise (at least comparatively) doesn’t scribble pseudo-justifications in his hovel; Vanikin has become a kind of counselor to the others as they skid through life: “Prospero in his formica and linoleum cave,” “urban guru, shambling shaman, sink-estate Delphic oracle.”

No desert-bound stylite ever had a social life as vibrant and overfull as mine. For mine is the cottage door the path to which is beaten by the forest-dwellers of the welfare state.

He has “become a sort of old man of the mountain,” and this further turn of the screw was signaled by the book’s epigraph, a longish quote from Mann’s The Magic Mountain, as well as Vanikin’s not infrequent references to his seven years of exile.[6] [8] Exchanging the metaphor of height for depth, Vanikin combines both Hans Castorp’s illness-enforced seven-year stay at the cosmopolitan tubercular sanitorium at Davos (globalism! Europa House!), but also the pedagogic roles of longtime inmates Naphta and Settembrini, who compete to influence Castorp with their competing but equally radical ideologies.

Within the timeframe of the novella itself, Vanikin moves from devising creative resumes for the hopelessly unemployable — “Producing a curriculum vitae for Jimmy Shawn would require imaginative skill in the art of the hoax on a par with The Protocols of the Elders of Zion” — to delivering a public lecture on the history of the housing project that proves so popular as to lead to an in-house school; in the dénouement, we learn how this has been devised by family, friends, and even journalists as the means for his recovery and social re-entry: his “sequel,” both new book and new life:

I came here, to the underworld, for a bit of peace and quiet, and what do I get? The love of the good people.

The author has a PhD in philosophy and is able to limn his protagonist’s narration and conversation with allusions from Plato to the Vienna Circle, always apt rather than pretentious; one imagines both author and narrator as one’s favorite college professor:[7] [9]

After my recent musings on time, it was pleasant to flip the disc over and play the Kantian B-side, space.

Clarity of expression is never to be sniffed or sneered at, and here is a sentence of which Tarski would have been proud.

Money is still acting like an insane woman in the market square, all matted hair and flung excrement.

I dread Craig. On the few occasions he had been inside my cubicle here at the house I had cringed in the corner while he attended to trip switch or faulty tap, and he seemed exactly what he was, a dreadful man in a city of dreadful men.

This is the curse of the genius manqué; always to believe that the smallest pebble thrown into the mill-pond of everyday affairs will mount into a tsunami of self-relevance.

He is wearing a black suit and white shirt buttoned up to the neck but with no tie. I have never liked this, it is a fashion statement I don’t understand, an unreadable semaphore. What’s he reading now? Amish literature? A history of Georgian undertaking? The bloody Torah?

Estrella’s generation has played an extraordinary trick with the idea of attributes, eschewing obvious reality in favour of a deep and sacrosanct myth. It was almost Homeric.

Readers might find the happy ending, carefully prepared as it may be, something of a deus ex machina; but they should rid themselves of such faux-sophistication and appreciate a novel from Our Side that doesn’t end with a mass shooting or apocalyptic destruction (although it does involve the overturning of the New World Order[8] [10]). As Schopenhauer, one of our narrator’s favorites, counsels us:

So if cheerfulness knocks at our door, we should throw it wide open for it never comes inopportunely. . . . for it alone makes us immediately happy in the present moment, and that is the highest blessing for beings like us, whose existence is but an infinitesimal moment between two eternities.[9] [11]

Many on the Dissident Right will recognize and nod along with Vanikin’s reference to “my university-banned and universally unread debut.” It will be a pleasant duty for them to make sure this book at least avoids the latter fate.

[1] [12] Or “Memoirs from a Mousehole,” as Vladimir Nabokov preferred/insisted, calling the standard title “stupidly incorrect”; see his Lectures on Russian Literature (New York: Harcourt, 1981), pp. 149ff. For an interesting — though weak — account of how the work fits into “the Roots of the Right,” see John Carroll, Break-Out from the Crystal Palace: The Anarcho-psychological Critique: Stirner, Nietzsche and Dostoevsky (London: Routledge, 1974).

[2] [13] Another: “These are the times that try to try men’s souls, but cannot, largely due to the comfort blanket of routine.” And: “Routine, the quotidian march of the bachelor’s day, very much meets with my approval.” Cf. Beckett’s discussion of habit in his 1931 book on Proust. Maybe it’s me, but Gullick’s dialogue often seems to channel another Irishman, Flann O’Brien: “She says, ‘How was your sister?’ I think, silently: Superior. Aloof. Cold. Patronising. Distant. Empty. Callous. Charmless. ‘Fine’.” On the other hand, there’s “Joyce, with his NHS specs and his stupid hat. Why couldn’t he just write stories about Dublin? Why all the language-mangling?” Why, indeed.

[3] [14] Not to be confused with the publishers of the English edition of my favorite work of Teutonic pseudo-scholarship, Lanz Von Liebenfels’ 1905 treatise Theozoology, or The Science of the Sodomite Apelings and the Divine Electron (An introduction to the most ancient and modern philosophy and a justification of the monarchy and the nobility).

[4] [15] “Estrella is fussing around in the kitchen area. Any property that contains ‘areas’ is essentially always going to be one room and a toilet. They draw the line at a toilet area.”

[5] [16] “One last blag for the old criminal, like in the movies.” In Ritchie’s Snatch, when Cousin Avi (Manhunter’s Dennis Farina!) is told that the local bookies got “blagged,” he demands, “Speak English. This country spawned the language, and nobody seems to speak it.”

[6] [17] “I haven’t left my monk’s cell for over seven years.” Or, “I had spent seven years and some spare change of days building my castle of ideas here at Europa House.”

[7] [18] Any student would cheer or stamp their feet or whatever modern students do to signal approval: “I would take a Reader’s Digest account of a visit to a Neolithic flint museum in Wiltshire over Hobbes’s fucking Leviathan any time of day or night.” Or on Nietzsche’s idea that the best thoughts come while walking around: “I doubt that Thus Spake Zarathustra would have been much of a read if Fred had had to stroll down to Ahmed’s 7/11 each morning for fags and tinned ravioli, avoiding dog shit and nutters en route.”

[8] [19] In this, and only in this, it reminds me of Frederick Rolfe’s Hadrian VII, where a spurned candidate for holy orders dreams the Church has recognized its error and decided to make him Pope. See my “e-Caviar for the Masses [20]!”