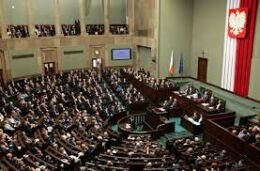 Almost lost in this summer’s news cycle is an extremely instructive story. On June 24, the Polish Parliament’s lower house passed a draft bill which would set a thirty-year deadline on when people can recover property seized by the Nazis during the Second World War or by the Communists afterward. The lower house officially passed the bill yesterday, August 11. This law could cause up to ninety percent of pending claims to be dismissed, and would effectively prevent a large number of Jews (many of whom either survived the Jewish Holocaust or are descended from survivors) from retrieving whatever it is they believe they have coming to them. The bill still awaits Senate approval and the Polish president’s signature before officially becoming law.

[t]his is a direct and painful attack on the rights of Holocaust survivors and their descendants. This is not the first time that the Poles are trying to turn a blind eye to what was done in Poland during the Holocaust.

It is a horrific injustice and disgrace that harms the rights of Holocaust survivors, their heirs, and members of the Jewish communities that existed in Poland for hundreds of years. . . .This is an incomprehensible action. This immoral law will seriously harm relations between the countries.

International Jewish groups are getting into the fun as well. The Jewish Press reports:

“This is not just another law, it is legalized theft, and the language is written in such a way that it implicitly seeks to single out Jews as undeserving of retrieving what was stolen from them,” European Jewish Congress President Dr. Moshe Kantor said.

“It is not ‘privileging’ Jews as some claim in Poland, it is disenfranchising them, creating a higher bar than for all others.”

Kantor added that the new law will also further highlight Poland’s unique position as the only country in the region which makes Holocaust restitution impossible and said the move runs counter to Poland’s international commitments.

“It is outrageous that someone who survived the Holocaust, who will be in their later years, will still be deprived justice by this cruel, illegitimate and discriminatory law,” Kantor said.

The United States is also pressuring Poland not to pass this law, with Cherrie Daniels, the US special envoy for Holocaust issues, claiming that it “would cause irreparable harm to both Jews and non-Jews by effectively extinguishing claims for restitution and compensation of property taken during the Holocaust that was subsequently nationalized during the Communist period.”

Many English-language sources that I have seen give little time to the Polish side of the story. Prime Minister Mateusz Morawiecki has firmly stated: “I can only say that as long as I am the Prime Minister, Poland will certainly not pay for German crimes. Not a single zloty, euro, or dollar.” AP reports that the law is a “response to fraud and irregularities that have emerged in the restitution process, leading to evictions or giving real estate to property dealers.” Al Jazeera also quoted the Polish foreign ministry, which said that the law would “lead to the elimination of fraud and irregularities, which occurred on a large scale.”

In other words, Jews have been gaming the system and cynically taking advantage of the Polish people in the process. The United States and Israel, of course, have rejected this claim. But nowhere in these sources is it shown where this claim is indeed not true.

In any event, the Polish Senate will be deliberating on this bill, possibly this month. Hopefully they will ignore the Americans and Israelis and pass it. This act will directly rebuke those Jews who use their eighty-year-old atrocity as a pretext for transferring resources from gentile hands into Jewish ones. It’s theft, basically. And PM Morawiecki is doing the right thing by saying nie to this brazen shekel shakedown. He may also serve as a role model for other world leaders whom Jews ethnically bully with their right hand out and left fist clenched.

But at the risk of restating the obvious, let’s break down the absurdity of it all.

First, I don’t think this is about the money. Jews are the wealthiest people per capita on the planet, and there are only 14.7 million of them, according to the Jewish Virtual Library. This is approximately 0.186 percent of the world’s population. As of 2018, they made up nineteen percent of the Forbes 200 Richest List. The combined net worth of the top sixty wealthiest Jews is approximately $841.5 billion. You’d think they could scrape together a few shekels to help ease their Holocaust-surviving brethren out of the abject poverty the Nazis and Communists plunged them into decades ago.

So, this isn’t about making Jews wealthier as much as it is about making gentiles poorer — especially the white gentiles. Just the fact that the fabulously wealthy Jews have the unmitigated gall to pester not-so-wealthy Poland for money over events that happened four generations ago is offensive. Morawiecki would have been fully justified to tell the Israelis that they deserve a plate of bubkes with a side of curly fries.

Second, based on the disproportionate Jewish influence upon the early Soviet Union, maybe the Russians, Ukrainians, the rest of the Baltics, and Central Asian peoples should start hitting the Jews up for a few billion themselves. After all, the twenty-or-so million killed in the terror famines, the gulags, the Great Terror, and in the Russian Civil War is quite a bit more than the Jewish Holocaust numbers historians like to foist on us. Many times in the past I have outlined the prodigious Jewish atrocities committed during this period, most recently in my six-part treatment of Aleksandr Solzhenitsyn’s Two Hundred Years Together. Yes, Jews were not solely responsible for these atrocities, but they were disproportionately so, and by wide margins, according to Solzhenitsyn in Chapter Eighteen of that work. Jews also “saved the [October] Revolution at a difficult time,” according to Vladimir Lenin himself (as quoted on page 224 of Yuri Slezkine’s The Jewish Century). On page 229 of his 1990 work, Stalin’s War Against the Jews, Jewish writer Louis Rapaport describes Lazar Kaganovich (who was still alive in 1989) as having “more blood on his hands than any living person.”

So 0.186 percent of the world’s population was responsible for the success of a revolution which resulted in tens of millions being killed; and a mere 32 years ago laid claim to the world heavyweight champion of war criminals. And today they want us to give them money? You’d think a people with so much blood on their hands would think twice about extorting others for past crimes. But no. You’d think that such a people would suffer some collective guilt over their past as well — especially considering how often they poke their circumcised guilt cannon at others. But again, no. They may feel guilt over trivial things, like neglecting an overbearing mother, but not so much about the stuff that matters. You know, like those weighty passages of history white people feel guilty about all the time.

Finally, the Poles are simply and obviously not guilty of the crimes that are being ascribed to them. They were invaded and occupied by the Nazis, and then they were taken over by the Soviet Communists. These are the two entities responsible for the loss of Jewish wealth and property — according to the claimants themselves. So then why do they petition the perfectly innocent Polish government for redress over acts they weren’t a party to? Why are they making the Polish people foot the bill when these people were victims of the Nazis and Communists as well? This would be a little like the Irish petitioning the British Crown for restitution over the sins committed by Oliver Cromwell. It’s ridiculous.

The Polish foreign ministry put it best when it accused the Israelis of having “an ignorance of the facts and Polish law,” and stated:

Poland bears no responsibility for the Holocaust, which was a crime committed by the German occupiers against Polish citizens of Jewish nationality and others. The victims of German crimes were millions of citizens of the Second Polish Republic.

Deputy Foreign Minister Pawel Jablonski also speculated that “[w]e believe that unfortunately what we’re dealing with here is a situation that certain Israeli politicians are exploiting for internal political purposes.” So, there’s that, too.

So, good for Poland. I dearly hope the Poles stick to their guns and their money during this little row. I also hope that other countries follow suit and let the Israelis and world Jewry know that the time for shaking people down for shekels is finally over.

And now, with sincere apologies to all who love English literature, I give you:

It’s their new and shameless tactic, one that’s mightily climactic,
To use our fathers’ cruelty in a war
Wherein they were just as sinful, but because they were more win-full,
They dictate blame and guilt for cash to score.

And that is called asking for Jew-shekel,
And the people who ask it tell you
That you’ve only to pay ‘em the Jew-shekel
And then you’ll be rid of the Jew!

It’s our new and shameful tactic, every bit anticlimactic,
To rue our fathers’ cruelty in a war,
As if war begets affection and our enemies’ abjection.
We pay up cash for pardon evermore.

And that is called paying the Jew-shekel.
It is something you cannot undo.
For if once you have paid ‘em the Jew-shekel
You’ll never be rid of the Jew!

I will dare to sound didactic, for this new and shameful tactic
Of mourning fathers’ cruelty in a war
Should not make ‘em try to shame us, but instead only inflame us.
For when they ask for cash, I do implore:

“Don’t ever pay anyone Jew-Shekel
No matter how keenly they try.
For all nations have sin; those who pay it begin
To descend into ruin and die!”