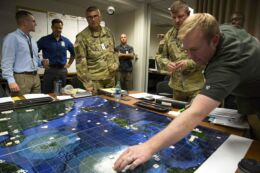 Imagine that you’re William the Conqueror while he was still known as William the Bastard. You and your men are languishing in Normandy because lack of favorable wind is preventing your invasion fleet from setting sail for England. Imagine that, unlike the historical William, you hear that the Norwegian King, Harald Hardrada, has battered the English forces at Fulford. Would that make you cheer? Would that mean that Hardrada is now your friend?

Let’s step out of the realm of historical fantasy for a second and imagine that you are one of the Supreme Racist Command, but back when we were still known as the Dissident Right. You’ve just heard that our principal enemy, the globohomo empire, has taken a battering from the Taliban and has been forced to retreat from Afghanistan. Would that make you cheer? Would that mean the Taliban are now your friends?

There is not a direct correspondence between us and William, between globohomo and the Kingdom of England, or between the Taliban and Harald Hardrada, of course, but I chose the conflict of 1066 because it’s the most popularly-known historical example of a multilateral war — where a side which fought two enemies lost to the second one because it exhausted itself fighting the first. We are in a similar situation, in a multilateral conflict which is still sub-kinetic, still waged at the political and economic level, but waged nevertheless between multiple sides, each with its own agenda of which we are but one.

A more comparable example would be the period between the Auspicious Incident in 1826, in which the janissary corps was forcibly dissolved, and the dissolution of the Ottoman Empire in 1922. During this period, it became evident to all of its subjects that the Ottoman Empire was not long for this world. However, as Adam Smith put it, there’s a lot of ruin in a nation, and there were 90 years’ worth of ruin in the old Empire before Atatürk put it out of its misery. During those 90 years, however, anyone opposing the Ottoman Empire from within found himself in a peculiar position.

While his principal — and probably most powerful — enemy was still the Ottoman Empire, and the Empire still had the power to do him serious injury, if not outright crush him (in the cases of the independence movements and local strongmen), the fact of the matter was that the Ottoman Empire’s days were numbered, even if this number was not yet known. Thus, the logic of war became slightly different. Whereas before the goal would have been to do injury to the Empire itself, the goal now became to outlast the Empire and do injury to one’s various rival factions which likewise opposed it, because on the day of the Empire’s collapse, no other entity would take its place, and all of the rival groups would become aware of each other as competitors for the same, or similar, goals.

In some cases, these goals might not be mutually exclusive (at least at first glance), but others definitely were. For example, the Balkan nations’ various irredentist ambitions were (and are) mutually exclusive, and while they were all theoretically opposed to the Ottoman Empire, in practice, as the end grew nearer, they were increasingly opposed to each other.

This was also true of  the various rival empires which were alternately trying to prop up the Ottomans (mostly Britain and France) or diminish their influence (mostly Russia and the Habsburgs). While Russia and Austria both theoretically opposed the Ottomans, they also opposed each other, which led to jockeying for influence in the Balkans, mostly waged on behalf of the various Balkan nations in order to conceal the imperial ambitions behind it. Even the Ottomans’ French and British friends had plans on the back burner to carve it up, because they could also see the writing on the wall.

Of course, there’s no direct correspondence between the late Ottoman situation and the situation of the global American empire right now. For one, I don’t think that globohomo has suffered a blow as mortal as the Auspicious Incident. No, the Afghanistan withdrawal is not such a blow. Far closer would be the “fortification” of the 2020 elections, but in Ottoman terms, it just demonstrated the power of the janissaries (the permanent bureaucracy) over the Empire rather than its official rulers: in the Ottomans’ case, the Sultan and Sublime Porte; in the American case, the President and, to a lesser degree, Congress.

A lot of Westerners are accustomed to thinking of the Janissaries as the Ottoman equivalent of the Praetorian guard, i.e. as the Sultan’s bodyguards, but in practice, they were the military and civilian administrators of the Empire, and by the seventeenth century were its de facto rulers. Sultan Osman II angrily declared that he was a mere subject of his own slaves, leading to a Janissary mutiny and his murder.

Similarly, the 1974 palace coup against President Nixon, or his previous defeat [2]in 1960 through election shenanigans [3], would be events in recent history where America’s janissaries mutinied against America’s legitimate ruler. But it is important to understand that however corrupt and stupidly resistant to reform America’s janissaries may be, just like the Ottoman janissaries, their dissolution and replacement by a more pliant military and civil administration will be the mortal wound that starts the American empire’s long bleed. This is because the administrative apparatus is so burrowed into the imperial body politic that there’s hardly any healthy tissue left. The Ottoman Empire’s long dissolution tended towards the current rump state, the Republic of Turkey, which for all its faults is at least a stable country whose international influence is nothing to scoff at.

That’s all well and good, and will probably transpire in the future. In the meantime, we have to look to our own fortunes, our own position, and our own long list of enemies potential friends. Who are we? Who are they?

Travis LeBlanc has done a great job of looking into the dissident Left (though I hear they prefer to call themselves dirtbags). While they’re not our friends, they’re not exactly friends of the empire or the mainstream Right, either. This means that they are a side in this war whose movements we should at least follow with some interest, even if the red-brown alliance hasn’t got a snowball’s chance in hell of manifesting [4]. Recognizing that they’d still throw me in the gulag and shoot me for being sexy if they were to ultimately come to power, I still find myself cheering for some of these Bernie Bros as they give the empire headaches.

We are White Nationalists, which means that we seek to secure the existence of our people and a future for white children. This makes us explicit enemies of the empire, which is now openly anti-white. The Deep State, which is the place from which the empire is truly governed, has three factions fighting for control of the empire. We can colloquially call them the Obama people, the Clinton people, and the Bush people, after their most recent political figureheads. As it happens, the Obama people are now battling a Clinton-Bush coalition [5] over the recent pullout from Afghanistan.

None of these three factions is on our side, and they’re all explicitly anti-white. All three have catspaws in mainstream politics, and all three try to influence dissident politics. So-called Breadtube, which tries to pass itself off as dissident Leftist, consists mostly of the catspaws of the Obama or Hillary people. Many people pretending to be dissidents are actually catspaws of the Bush people — the identifying marker being a reluctance to openly condemn the empire and especially its anti-white policies; failure to recognize and condemn the Bush wing of the deep state; and attempts to salvage its reputation and shanghai Dissident Right thinkers into somehow believing it can be turned to good. They also try to channel dissident energy into supporting the mainstream Right — which is, I will reiterate, the Dissident Right’s principal enemy. (As always, bear in mind that such controlled opposition might be mind-controlled [6]and not the classic paid shill.)

These are the forces arrayed within the empire — or at least around the imperial center. Other forces battling the empire and each other are rival empires, in this case meaning Moscow and Peking, which have their own imperial conflicts; nations trying to liberate themselves from imperial control, with or without help from Moscow, Peking, or either of the central imperial factions; nations under imperial control that are trying to influence affairs in the imperial center (i.e., Poland, Hungary, or Israel). Israel, for example, has the empire take care of its defensive needs, with or without help from either of the central Deep State factions, or maybe even with outside assistance from Moscow, Peking, and imperial institutions with their own agenda — which form the bulk of America’s janissaries.

When I mention nations under the imperial yoke, it’s natural to think of Afghanistan and Iraq, or for the initiated, Germany and France, but here I’ll also include the historic American nation (or nations), which were the first to suffer the empire’s trespasses.

That’s quite a varied and rich tapestry of factions with complementary and conflicting goals. The earnest Right-winger, ever the eager soldier, now asks, “Who are /ourguys/ and who’s the enemy?” If only we had a simple answer to that. The Rightist wants to divide the world into us and them because that simplifies the conflict we’re embroiled in. The truth is that even though there may be a single “us,” there is not a single “them” — and even “us” is subject to redefinition as alliances are forged, broken, reforged, and various factions opposing the empire — or at least one of its own internal factions — regroup within the dissident camp.

Then there’s the ever-present danger of an elite faction or an outside empire instrumentalizing a section of the Dissident Right, perhaps even our narrower group of white identitarians, for its own nefarious purposes. This isn’t as simple as bribing the leaders (although that happens, too), but may be more insidious. Again, I will mention that most controlled opposition is mind-controlled. For an example of such instrumentalization, look at how Duginism took over sections of the old Alt Right [7] and now seems to be hewing them to Moscow’s imperial will. The recent promotion of certain flavors of dissident by the (Straussian) Claremont Institute [8] and slime molds like Michael Malice seem to indicate a similar attempt by the Bush wing of the Deep State to instrumentalize elements of dissident thought. And who’s to say — maybe even the brave mujahedeen of Afghanistan are somebody’s catspaw?

I’ll leave you with that thought. We have more enemies than we can account for; many of them pose as friends and will point to a common struggle to demonstrate that we are indeed friends. Do not be taken in. Remember who we are, what we want, and what we stand for. Our goals are not their goals, and at some point in the future, these opposing goals will come to a head. Your guiding principle in these matters should be, “Is it good for our cause? Is it good for white people?” Likewise, don’t flip your lid if our guys celebrate a clear defeat for the principal enemy, even if it comes from a rival faction.