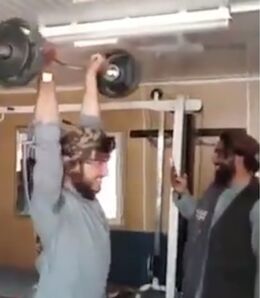 The fall of Kabul was a serious and somber moment, one of those historic moments that great authors write about. But like real historic events, it was not without its moments of levity. Here’s a video of the newly-victorious Taliban playing around with the gym equipment in Kabul’s presidential palace. It even elicited responses from greatly esteemed Twitter users such as Nassim Nicholas Taleb, who criticized them for not trying to deadlift. This might be a good moment to look at the nature of physical fitness and our relationship to it.

None of the young Taliban whom we’ve seen invade the presidential gym or dick around in bumper cars look like they can bench-press or deadlift their body weight. And yet these lads were fit enough to defeat the Afghan National Army and outlast the armies of globohomo for twenty years. As people commenting on Steve Sailer’s Unz article have said, deadlifting doesn’t matter when you’re an irregular light infantryman. The average Taliban can cover twenty miles of rough country on foot in a day, subsisting on little food, all while lugging around arms and equipment. Are they fitter or not than a gym bro who benchpresses his body weight but cannot hike up a moderately steep hill?

Personally, I am something of a gym bro and delight in that whole life. The rushes of testosterone and endorphins which one gets from lifting are sometimes exactly what I need after a long day. And yet there’s a different sort of quiet pride in one’s own fitness which comes from trekking uphill over rough country, all the better if there are no other people around. This carries risks, of course. Tall grass is a haven for snakes, ticks, and other nasties. Woods contain dangerous animals. I myself ran into a wild boar on one of my off-track hikes. Having no weapons with which to fight it, I am not ashamed to say that a bout of very vigorous discretionary valor saved me from injury. Some months later, a fellow hiker ran into and photographed a mama bear with cubs on that same trail. Less dramatic but equally dangerous is the possibility of twisting and breaking your ankle on a jutting root or a hidden hole in the ground. The danger adds to the experience. Wander off the beaten track and you understand that nature isn’t just beautiful, but unwelcoming to city slickers.

I suppose that’s why the Taliban, the Viet Cong, and many other guerrillas made the woods and hills their secret bases from which they struck at their vastly superior enemies. If you don’t know the land, it’s just as deadly as the enemy army. Our civilization is a decadent, urban one. The woods and hills are a foreign country to us. Lacking challenge and lacking difficulty in our lives, we’ve invented gyms and gym equipment. Deadlifting is a simulation of lifting heavy stones to waist level. Precious few Westerners have to lift heavy stones as a matter of course. Just as the characters of Aldous Huxley’s Brave New World had surrogate pregnancies and surrogate violent emotional experiences, so do we have surrogate back-breaking labor in the form of gym workouts — at least for the time being.

Soon we are likely to see the rollout of vaccine passports all around the world. They’ve been in use in my country of Macedonia for four days now. I don’t know about you, but I’ve seen enough vaccine horror stories to know that I’m not putting that poison into my body, no matter the cost. That being said, this means that I’ll probably not be seeing the inside of a gym for as long as the vaccine passport mandates are in force. I can always buy a bunch of gym equipment and open an ersatz one in my basement, but it’s expensive and a hassle. I am rather planning on taking to the hills, mountains, forests, and lakes for my fitness.

Even at a leisurely pace, hiking up a hill burns more calories than weight training. Swimming famously develops every muscle group while also providing a cardio workout. Part of the reason why I’m never really out of shape, even though I may occasionally get fat, is that I spent seven years of my life playing water polo. This has given me core strength and endurance that takes very little effort to maintain and doesn’t ever really go away. Many Dissident Rightists are gun enthusiasts. Why not use those guns for hunting? Remember to ditch the SUV and go on foot; you’ll also learn valuable bushcraft and survival skills.

Also important is the spiritual aspect of going into the woods. We whites are intimately connected with the forest, where we can find respite from the hustle and bustle of city life and where the old spirits live. A wood is sometimes just as noisy as the city, with the sounds of the bugs and the birds and the occasional animal, but these noises, curiously, do not grate on the senses. Encounters with wildlife can also be recuperative. Just remember that the woods aren’t always a welcoming place. Little Red Riding Hood found that out the hard way, as did I when I had my encounter with the wild boar. Go in prepared.

Preparedness also applies to other equipment. Resist the temptation to go in wearing shorts — your legs will be a smorgasbord for ticks and other bugs. Proper shoes are also key. Unless it’s punishingly hot, you should be wearing hiking boots. Some people like to bring along a walking stick. Personally, I find that if I need a stick, the woods will provide. Know the water sources where you’re going, and if there are none, you’ll have to bring water yourself. Do not mess around with water; you’ll need a lot of it.

I assume most people reading this will likewise refuse the vaccine. Part of the price of refusing the poison will be the privilege of going to the gym to work out. I’ll instead seek out my physical fitness in the woods. Forget the gym rat life. Sign up for the Taliban fitness plan today! Take to the hills, come back with legs like Doric pillars, learn all the flora and fauna of the woods, take a dip in a mountain lake, purge your lungs of big city gunk, and one day, maybe even overthrow the evil globohomo regime.