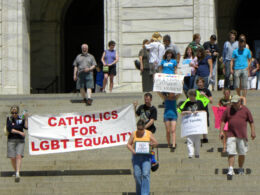 “Political Catholicism” can evoke a lot of things. Some on the Right may think of the Habsburgs, or some revanchist regime restoring throne and altar. Liberals may think it’s a hidden code for fascism, based on vague memories that the Pope supported the Nazis . . . or something like that. Evangelicals likely think of political Catholicism as the fulfillment of Know-Nothing nightmares. But most American Catholics wouldn’t know what political Catholicism is. They hardly attend church, much less listen to their bishops.

But even though this concept is absent from the American political scene, many Catholic intellectuals want to make it real. Matthew Walther, a contrarian conservative and editor of the Catholic publication The Lamp, offered his vision of political Catholicism to New York Times (NYT) readers last week. It was far from neoreaction or clerico-fascism. It’s merely pro-life social democracy.

Walther begins his article with a strong appeal to the sensibilities of his liberal readers. The first paragraphs discuss how a reactionary Catholic journal in the 1960s endorsed black power. That journal, Triumph, was founded by Brent Bozell. Bozell was one of the architects of the modern conservative movement. He founded National Review with William Buckley and co-wrote Barry Goldwater’s famous Conscience of a Conservative. But in the 1960s, he drifted toward what would today be called integralism and demanded a more active role for the Catholic Church in American life. While National Review condemned black power, Triumph praised it as a necessary reaction against white racism and “the soulless tyranny of secular liberalism.”

Walther doesn’t fully endorse this stance, yet his purpose is to let readers know that political Catholics share the same distorted view of race as NYT readers. “Reactionary” Catholics and atheist cat ladies can both agree that black lives matter, systemic racism rules our society, and black riots are good. Walther’s overall point is that Church teachings supports much of the modern Left’s racial agenda. Throughout the article, we see little that would upset liberal readers.

The conservative bases his political Catholicism primarily on the agenda of the US Conference of Catholic Bishops: “in favor of looser immigration policies, prudent stewardship of the environment and criminal sentencing reform, yet opposed to abortion, same-sex marriage and divorce.” Later on in the piece, he adds: “A new Catholic politics would ‘baptize’ Bernie Sanders’s health care plan, degrowth economics and bans on single-use plastics while drawing attention to neglected elements of our own political heritage that really are worth preserving, such as the presumption of innocence.”

He argues that the Church’s politics coincides with the “realignment” that mainstream populists love to harp on about. Walther says that most American voters support progressive economic policies, while nearly half favor socially conservative positions. The implication is that there’s a huge coalition of pro-life social democrats. People want single-payer healthcare to go along with restrictions on abortion and euthanasia (and whatever “degrowth enconomics” are). To believe this, you’d have to think President Trump won the 2016 election through appeals to Catholic Social Teaching. (Walther also implies Joe Biden became president through similar appeals.) But this ignores what issues actually motivated the electorate. Nearly all studies on Trump voters–including on those Democrats who crossed party lines–found that race and identity issues were the chief factors, not economics and certainly not social conservatism. These voters may like the welfare state, but they care far more about immigration and crime than they do about abortion or religious liberty. Trump barely touched on social conservative issues in both of his campaigns and Biden ran as the most pro-choice presidential candidate in American history. Neither showed the apparent popularity of Catholic Social Teaching (CST).

Walther does admit that the shared values of America’s political parties (”a bellicose foreign policy, free trade, social libertinism and the financialization of the economy”) are the opposite of CST. He argues that the church’s politics can serve to inspire a realignment of the future which would require voters to completely drop their present concerns and focus on what Catholic intellectuals care about. That’s an unlikely prospect.

The writer also offers a Catholic version of globalism: “Instead of lionizing the neoliberal banalities of Davos Man, Catholic social teaching articulates a morally inflected defense of internationalism that rejects most of what makes Americans suspicious of it — the obliging attitude toward corporate power, the soft cultural imperialism of liberal nongovernmental organizations — while insisting upon its indispensability for the common good.” This once again fails to consider the  anti-globalists’ primary motivation, namely immigration. Saying globalism is for the “common good” does not change the fact that it sends millions of Third Worlders to the West.

The main goals for Walther are to bring Christian democracy to America and revive Catholic culture. Catholic culture, in Walther’s telling, is a conservative intellectual’s dream:

It would model virtues such as gregariousness, intellectual curiosity and munificence. It would offer an unapologetic defense of leisure and innocent entertainment by showing us the innate worthiness of everything from public barbecue grills and minor league baseball to regional theater companies and the miracle of hi-fi recording.

The article’s chief failure is imagining that there is a constituency for Christian democracy in America. There isn’t. As stated before, most American Catholics don’t attend church. Only 39% say they regularly go to mass. The number of supporters of traditional Catholic teachings are even worse. 56% of Catholics believe abortion should be legal in most cases, in total contrast to Church teachings. Meanwhile, a majority of Protestants, whose churches are less emphatic about abortion, believe the practice should be illegal in most cases. Most American Catholics believe the Church should be more welcoming to gays and divorcees.

The Church itself is incapable of acting as an effective political force in the West, outside of barring contraceptives to Africa and helping Third Worlders migrate. It failed to stop abortion and gay marriage throughout Europe, despite its bishops trying to rally the masses. And Christian democracy is a decrepit ideology throughout Europe. There is no longer a Christian Democrat party at the forefront of Italian politics, despite the fact that they ruled the country for much of the post-war era. The Christian Democrats still govern in Germany, but they can hardly be said to stand for Christian values anymore. Both of these parties were only really able to succeed politically thanks to the money and support of the American State Department. America needed non-fascist anti-Communists to govern Europe, and they found them in the Christian Democrats. With the Cold War over and Europe becoming increasingly secular, these parties no longer uphold the political Catholic ideal Walther wants for America.

It’s unclear how Christian Democracy could take root here. It only appeals to Catholic intellectuals who feel that the Republicans are too racist and the Democrats are too pro-choice. This is a very narrow demographic that is overrepresented at the American Conservative magazine, but does not represent a significant portion of the Right or even of the Catholic faithful. Walther constructs a fantasy constituency in his appeal to liberals.

The only political Catholicism that liberals would tolerate is one that devotes itself completely to open borders. Case in point: Catholic bishops recently admonished Catholic politicians for supporting abortion and threatened to withhold communion from serious offenders. This announcement drew a swift backlash, particularly from Catholic Democrats. It doesn’t appear the Church can get the faithful to act in accordance with their wishes, much less the rest of society.

Political Catholicism, Christian Democracy, whatever you want to call it: It’s not going to work in modern American politics. It doesn’t address the root crises in our nation and seeks to direct populist energies in a silly direction. Its representatives are goofy Catholic intellectuals who could never win mass appeal or organize a mass movement. It’s merely another harmless “anti-liberal” ideology that reinforces the liberal system.