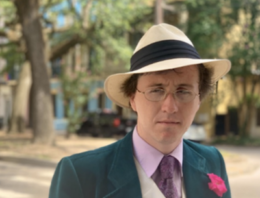 Looks like there has been another cancelation on the Left.

Nathan J. Robinson, the 32-year-old founder and Editor-in-Chief of the socialist magazine Current Affairs, author of the book Why You Should Be a Socialist, and irrefutable proof of the reality of physiognomy blew up his commie cred this week when he fired the majority of the Current Affairs staff in retaliation for them trying to form a worker co-op. The author of the article “The Need for Workplace Democracy [2]“ fired his staff (which was composed entirely of women and “non-binary” people) because they demanded better working conditions.

Robinson is a particularly repellent creature. For one, he’s a big “red-brown alliance” witch hunter: He’s gone after Jimmy Dore [3] and Aimee Terese for being too friendly with the Right. He wrote some articles attacking Krystal Ball [4] for suggesting that Right-wing and Left-wing populism might have common interests. This past June, he wrote a concern-trolling article called “How to End Up Serving the Right [5]“ where he accused Glenn Greenwald and Matt Taibbi of being useful idiots for the Right. He’s big on questioning other Leftists’ commitment to the Leftist cause.

Many on the Left consider Robinson de facto controlled opposition, as he is constantly attempting to steer the socialist Left into more establishment-compliant directions. He caused much annoyance during the 2020 Democratic primaries for hedging his bets by trying to support both Bernie Sanders and Elizabeth Warren — and then trying to prop up Pete Buttigieg [6] before going 100% unapologetically in the tank [7] for Biden.

He is also a pedophilia apologist [8], so much so that he even defended Milo Yiannopolous during his cancellation for talking positively about pedophilia. “Ironically, the remarks that finally got him expelled from the mainstream were among his less indefensible,” Robinson said at the time.

At one point, Current Affairs employed Yasmin Nair, a Jewish [9] pedo apologist, as an Editor-at-Large. In 2005, Nair wrote an article entitled “Can We Talk?: Censorship, Pedophilia, and Panic [10]“ in which she mused:

The stigmatization of groups like NAMBLA (North American Man/Boy Love Association), which have asked for conversations about the age of consent, means that we drive forms of desire inwards and underground . . . the problem with the current discussion around ‘adult-child’ relationships is that we are conditioned to think that sex with an older person is traumatic.

In a 2017 Current Affairs article entitled “WHAT WE’LL TOLERATE, AND WHAT WE WON’T [11],” Robinson described Nair’s article as “thoughtful and provocative.”

Robinson is, of course, also a race denier. He wrote a very long and deeply unconvincing article [12] attempting to refute Charles Murray’s ideas where he said (presumably with a straight face), “When we talk about black American music of the early 20th century, we are talking about one of the most astonishing periods of cultural accomplishment in the history of civilization” — and I would wager my life that he doesn’t actually listen to any of it.

One of the more amusing episodes in the Nathan J. Robinson saga was that he has been a fanatical denier of cancel culture, only to then get fired from The Guardian for a couple of tepid tweets about Israel. The first tweet read, “Did you know that the US Congress is not actually permitted to authorize any new spending unless a portion of it is directed toward buying weapons for Israel? It’s the law.” The other continued, “or if not actually the written law, then so ingrained in political custom as to functionally be indistinguishable from law.” Being the weasel that he is, he then tried to claim that he was only joking [13]. 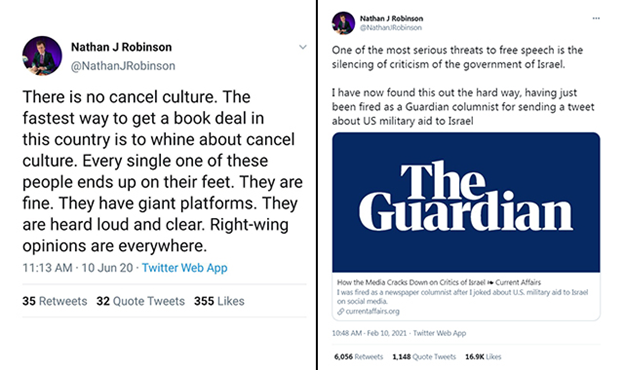 The man has no shame whatsoever, including about posing for pictures in front of his Corvette. I’m not one to begrudge a man his living, and I realize that he can’t help it if he comes from a privileged background, but ostentatious displays of wealth are extremely bad optics for someone trying to present themselves as an egalitarian spokesman of the proles. 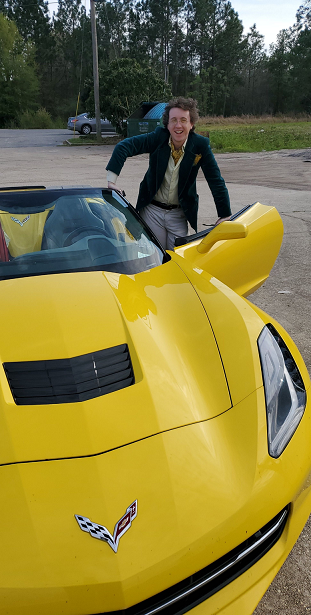 But perhaps the most obnoxious thing about Nathan J. Robinson is the fact that he speaks in a fake English accent despite not having lived in England since the age of six. After 26 years, his accent should be more than ambiguously Mid-Atlantic.

In short, the guy is a phony and a degenerate, so this cancellation is particularly gratifying.

A bombshell tweet [16] was dropped on Wednesday by Lyta Gold, Current Affairs’ Jewish [17] Amusement Editor (whatever that is):

I am grieved to tell you that @nathanjrobinson has effectively fired me & most of the @curaffairs staff because we were trying to organize into a worker’s co-op. This isn’t a bit. I wish it was.

The tweet then links to a Google drive containing an official statement [18] signed by five Current Affairs editors.

The statement is an interesting glimpse into Mr. Robinson’s mind and narcissism:

We all joined Current Affairs at different times. The Business Manager was even hired with the explicit instruction to help shepherd the magazine through the process of creating a more democratic workspace, in alignment with our socialist values. The organizational restructuring has been a topic for most of 2020 and 2021. We discussed it informally, we tried piecemeal reforms, we did a full-organization survey and one-on-one interviews with editors and staff to try to find consensus on a collective vision. Everyone’s stated goal, including Nathan’s, was to create a democratic workplace where all voices were equally valued.

Okay, so they wanted to commie the place up a bit. It’s a commie magazine. They’ve been commie in style, so how about becoming a commie magazine in substance? After all, it’s how Nathan J. Robinson always said a business should be run. As recently as a couple of months ago, Mr. Robinson was tweeting stuff like this [19]: 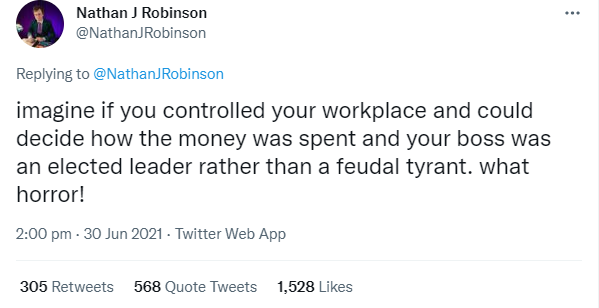 But when we finally got around to discussing organizational models during a Zoom meeting on August 7th, Nathan became agitated. He insisted that in our attempt to set shared internal values, we were disregarding his vision for Current Affairs as published in the first issue. There was a palpable shift in his demeanor, and he behaved in a hostile manner throughout the rest of the conversation. The next morning, he started removing people from the company Slack, and sent letters requesting resignations, eliminating positions, and in some cases offering new “honorary titles” which would have no say in governance.

So the staff of Current Affairs wanted Communism as it appears in the writings of Karl Marx, but what they ended up getting is Communism as it always ends up being in real life. Before they knew it, they were all being lined up against the wall by a megalomaniacal dictator.

Shortly after being blindsided by this sudden turn of events, Robinson sent the Current Affairs staff an e-mail that contained the following:

This organization has been heading slowly for some sort of reckoning where it was going to have to be made clear once and for all what kind of authority I wanted to have over it. And I was in denial about the fact that the answer is I think I should be on top of the org chart, with everyone else selected by me and reporting to me. I let Current Affairs build up into a sort of egalitarian community of friends while knowing in my heart that I still thought of it as my project over which I should have control.

Now, I’m not even against the idea that Robinson has the right to do this. Sure, hypocrisy is breathtaking — but it is his company, he is the star of the show, and going through with this commie plan of giving an equal say to a staff which is composed entirely of women and the mentally ill would definitely have destroyed the company.

What really turns the stomach is that he behaves this way toward people he describes as “friends” and who probably considered him a friend. He could have just said, “You know, I’ve been thinking about the whole commie plan, and I changed my mind.” Or he could have done what Cenk Uygur did when the staff of The Young Turks tried to unionize [22] and come up with some bullshit excuses for why, in this specific instance, they could not live up to their commie principles. He could have just said “no.” He would still look like a huge hypocrite, but firing his “community of friends” just makes him look like a hypocritical full-blown sociopath.

If I had to guess, he fired the staff because keeping them around would have been a constant reminder of what a fraud he is. Out of sight, out of mind.

The response to this debacle on the Dirtbag Left has been one of amusement. Robinson has made a lot of enemies along the way, and many people were glad to see him get his comeuppance. 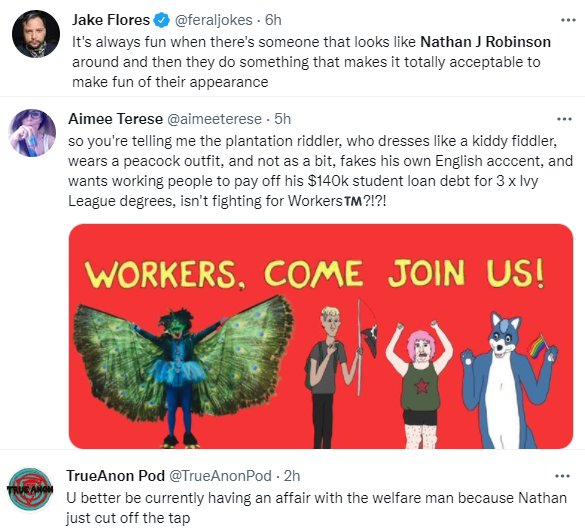 There has also been a trend of people writing Nathan J. Robinson-themed rap lyrics. 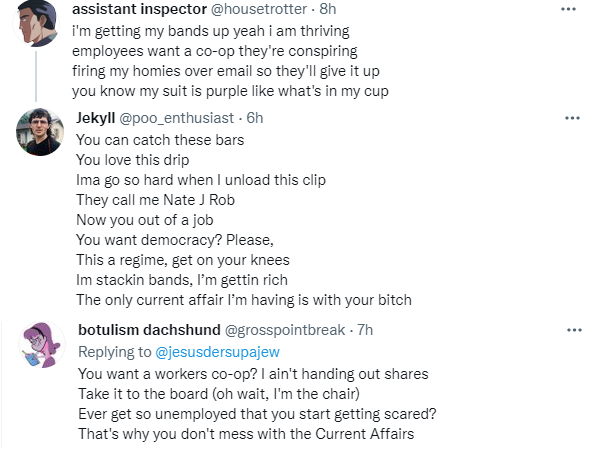 I think Nathan J. Robinson was aware that this bombshell was coming. Both his personal Twitter account and the Current Affairs Twitter had been inactive for the last few days. He has reportedly said that Current Affairs will be going on a one-month break as he hires new staff, but I honestly cannot see how he can come back from this complete annihilation of his credibility as both a commie and a decent human being.