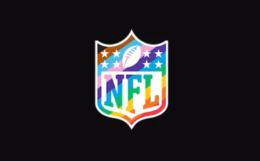 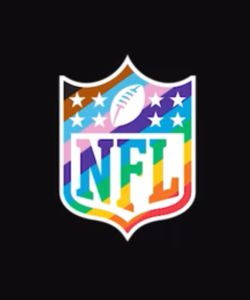 For more information on how you can help the @TrevorProject [2], visit https://t.co/YtauzLAHIF [3] pic.twitter.com/bkdWkAZ3vF [4]

The NFL is following a path paved by other leagues. The MLB, NHL, and NBA all host “Pride Nights [6].” They all sell “pride” merchandise to go along with these events. Many teams also change their logos to pride colors at random points in the season. Some teams go the extra mile and wear pride colors [7] on the field. This is typical of most corporations, but sports teams enjoy a greater loyalty and commitment from their customers than most corporations. Few people define themselves by what cereal brand they buy, but many people strongly identify with their favorite sports teams. And many sports teams have pretty conservative fanbases, particularly among hockey fans [8]. Yet, these teams feel the risk of alienating social conservatives is worth it to show their LGBT pride!

This isn’t just an American problem either. The Euro Cup this year made sure to celebrate [9] gays at every possible moment. Munich city officials wanted to light up their stadium in rainbow colors to protest the bigotry of Hungary when Germany faced off against the Magyar team. Euro Cup officials denied the request, but players, teams, and other stadiums found ways to express “pride.” Germany’s team captain wore a rainbow armband during the match. Fans waved pride flags and one spectator charged the field to brandish one in front of Hungarian players. Several stadiums throughout Germany lit up in rainbow colors during the match. England’s team captain wore a rainbow armband [10] during his team’s match against Germany. It’s always a good time to show that your sport is gay.

This is all a very sudden change, particularly with the NFL. In the early 2010s, there was a serious pushback within the league against gay players. San Francisco 49ers cornerback Chris Culliver, a black player, said on a radio show in 2013 that gay players would not be welcome in his locker room or any other team’s locker room. “I don’t do the gay guys man,” said Culliver [13].”I don’t do that. No, we don’t got no gay people on the team, they gotta get up out of here if they do.” Culliver apologized [14] for his comments, but did not suffer any punishment. Another player, former Minnesota Vikings kicker Chris Kluwe, said he lost his job in 2012 [15] due to his strong support for gay marriage. Now the league says the whole sport is gay.

Much of this reflects the broader changes [16] within American society. It wasn’t so long ago when even liberal states voted to ban gay marriage. The same year Barack Obama was first elected president, 52% of Californians voted to outlaw gay marriage. Four years before that, George W. Bush won partially on the promise to pass a constitutional amendment banning the practice. Obama opposed gay marriage in 2008 [17] and gays weren’t allowed to serve in the military when he first entered the White House. A majority of Americans [18] still opposed gay marriage at the beginning of the 2010s. Now 70% support gay marriage, including a majority of Republicans.