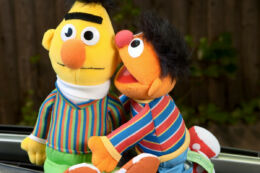 Inclusivity has always been a central feature of Sesame Street. Part of this, nearly from the beginning, involved an established couple in an alternative lifestyle. At the time, that made it the most cutting edge children’s show of all in terms of diversity. That makes it all the more problematic that a recent effort to conspicuously keep pace has fallen short of delivering the most progressive messages to a young audience.

The number one priority

As all good progressives should be aware, instructing the youth in correct thinking is of utmost importance, especially before they’re exposed to wrong ideas–or worse, try to make up their own minds. Such an important task can’t be left up to family or the local community, of course, since they might be reactionary bigots. Fortunately, television is excellent at making up people’s minds for them.

Two of the earliest characters in the Sesame Street lineup were Bert and Ernie. Remarkably forward-thinking for the times, they were the first positive depiction of a gay couple on television. Being on a children’s program made it an even more wonderfully transgressive “take that!” to repressive bourgeois morality. Bert and Ernie’s relationship continuing even into the Current Year serves to deconstruct the problematic myth that GLBTs (and MSMs in particular) are only interested in fleeting hookups –not that there’s anything wrong with a parking lot blow-n-go or a quickie in a bathhouse, of course.

Even so, there was an element of ambiguity to the Bert and Ernie relationship. (This, of course, is quite similar to the much-debated Batman/Robin relationship, a series replete with remarkably progressive attitudes about sexuality semiotically encoded in suggestive language, postures, and activities.) Mark Saltzman, a long-term screenwriter for Sesame Street, revealed in 2018 that he modeled the Bert/Ernie ‘ship after himself and his own boyfriend. Well, everyone had already figured it out by then, hadn’t they?

At the time, omitting overt homoerotic references was perhaps in line with the limited tolerance of the 1970s. Same-sex relationships were accepted in forward-thinking circles, yet generally speaking, private things remained private. This modus operandi of compromise was the common operating paradigm for non-traditional lifestyles. Still, as social progress moved forward, such reluctance to make full disclosure grew increasingly problematic.

Really, open secrets are stifling. This is because any limitations on behavior are tyrannical, unless of course any such restrictions are in furtherance of social justice. Isn’t it time to move beyond “the love that dare not speak its name,” beyond outmoded concepts like propriety and modesty? Bourgeois morality has no place in society, especially not on television. That’s the number one teaching medium for the forces of progress, after all. There’s hardly a better way to instruct the public on this matter than by putting the correct messages in a show for children. Sesame Street did deliver the goods with an implicitly gay couple, but this doesn’t do enough for The Cause these days.

Keeping up with the times, yet too little and too late

One could’ve hoped for a very belated coming-out party for Bert and Ernie. Better yet, there could’ve been a faaaabulous wedding for the pair, nuptials sadly delayed by the weight of thousands of years of ignorance and intolerance. What a fantastic way it would’ve been to celebrate the landmark ruling of Obergefell v. Hodges, which revealed that gay marriage had been constitutional all along! Instead, Sesame Street chose another route, attempting to catch up to the eternally moving goalposts of inclusiveness.

During the episode — debuting LGBT-based content aimed at children of all ages, including infants — Sesame Street character Nina introduces her brother and his husband, as well as their daughter, to Elmo and his friends as they celebrate “Family Day.”

“Okay, everybody — I want you to meet my brother Dave, his husband, Frank, and my sobrina, Mia, my niece,” Nina says as she introduces them to the other characters.

It’s not made clear if Mia is adopted, if Frank once had a walk on the ordinary side, or if the lines of gender fluidity simply have become porous enough with the steady pace of social justice for two men to reproduce. However, one thing is clear: today this is insufficiently progressive; indeed, barely an alternative lifestyle. Social justice is a perpetual cultural revolution, and the producers will need to do more than make halfhearted efforts to catch up. Nice try, but it’s definitely not enough!

As far as GLBT couples go, Dave and Frank seem too prosaic for the purpose of deconstructing heteronormativity. However, other than the same-sex angle, they merely imitate one of those boring old nuclear families that the forces of progress have made so much effort to deconstruct. All this would’ve been far more avant garde if the family had been presented as a uranian neutrois with a demisexual ambonec as polyfidelitous primaries raising xeir offspring as a cat. How’s that to smash the gender binary for the tykes in TV-land? Best of all, it would provide valuable role models to emulate.

Moreover, this move’s tardiness is problematic, at best. They saw fit to throw us a crumb, and decades too late. Such an inclusion would’ve been brave in 1981, and still edgy in 1991, but It’s The Current Year! How could this possibly have taken so long? Social justice must march onward, beginning with the correct instruction of the youth! This move was no longer at the forefront of progress, but rather was an afterthought. In the immortal words of Greta Thunberg, how dare you!

Nickelodeon is now at the vanguard of progressive pedagogy

Blue’s Clues & You! recently came out with a Pride Parade Sing-Along on their YouTube channel. Way to go! The video clip features an animated drag queen with a heart-within-a-heart emblem prominently displayed on the character’s outfit. This design is loosely reminiscent of the girl lover symbol that became popular during Pizzagate. Oh, how daring and transgressive! The melody not only enriches some dreadful song for reactionary patriots, it asserts that the families on parade are indeed families, just as much as Ward and June Cleaver and their spawn.

Nickelodeon also produced another video explaining the symbolism of the rainbow flag for the benefit of the kiddos. However, that gets a little bit off-message in a couple of places. One of the colors symbolizes sunshine and another is for nature; that much is problematic, of course.

Now on a serious note for the very first time: Who the hell needs television?