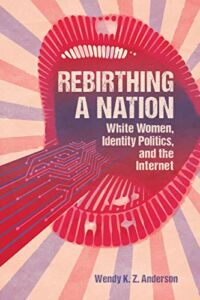 This is a book that the author conceived back in 2005 on a cute but shaky premise. A young academic in “Communications Studies,” Wendy K. Z. Anderson proposed that there was a cadre of tech-savvy White Nationalist women out there, and they were using their insidious HTML skills to ensnare and influence other women.

An intriguing idea, surely, though more suited to a Netflix screenplay than to a scholarly monograph. One problem was that Anderson just didn’t have the technical knowledge to talk about the subject. All she knew was that WN women were out there and had websites, and they seemed to be couching their beliefs in obscure jargon and strange user interfaces. A thornier problem with her thesis is that it seemed to celebrate the brains and ingenuity of WN women. This seems to be the main reason her colleagues and publishers were revolted by her original version when she submitted it in 2010.

The title of the manuscript — almost certainly the same as the current book — couldn’t have helped matters. Not only did “Rebirthing a Nation” allude to D. W. Griffith’s 1915 film — the utter apogee of race-conscious filmmaking, complete with the Ku Klux Klan riding to the rescue at the end — the eponymous “rebirthers” were tech-savvy WN women.

Anyway, Anderson put the thing aside and probably didn’t look at it again for years. Then Donald Trump won the 2016 election, and since the majority of white women voted for Trump, white women were to blame (so the story went). And Anderson’s old thesis just might have some new viability. Thus the current volume. Alas, the title now has little relevance to the package. Bits and pieces of the 2005-2010 version are still there, but they’re strange and obtrusive, like old-style hats that fall out of the closet. Instead of focusing on WN women and web technology, much of the book is stuffed chuggy-jam-full of buzz phrases: Critical Race Theory cant, cultural-Marxist jargon, and other vacuous nonsense. For long stretches, the writing is baffling, inchoate. (So much so that I sometimes imagined Anderson did it all out of spite: “They want unintelligible Lefty-crit? I’ll give it to ‘em!”) My recommendation is that you skip the first two-thirds of the book and go straight to the lengthy Epilogue, where the author explains her original intentions, and tells why the book is such a doggy’s dinner.

But first, an aside: Reworking or resuming an unfinished or aborted draft is bound to be a painful and chartless endeavor. You never know where you’re going to end up. In 13 years of writing The Lord of the Rings, J. R. R. Tolkien put it away repeatedly, sometimes for more than a year, and when he came back to it he always pushed it to a new level of terror. Then there’s Mark Twain, who breezed through the brilliant opening chapters of Huckleberry Finn (composing on a typewriter, a novelty in the 1870s), and then got stuck. After you’ve been kidnapped and imprisoned by your drunken father, after which you kill him and escape down the river, what can you do for an encore? So Twain put the typescript aside for a decade, till he realized that what the book needed was not a plot but a never-ending gallery of grotesques.

Now back to Anderson. In this author’s case, the challenge wasn’t holding the reader’s interest with a gripping narrative. Rather, Anderson had to write something that her handlers found palatable. From her Epilogue:

As a young assistant professor, I was buoyed that a major international publisher was interested in my work. However, when the reviews returned, they indicated that the book fell short of my intention. One reviewer even indicated that the way I was conveying information seemed problematic due to my use of objective language. I was devastated to hear that my work seemed to amplify rather than unmask whiteness. . . . I stepped away from the project, unsure of what to do with it, unsure of how I might make a necessary epistemological shift. . . . [Later] more young scholars, particularly BIPOC, recognized a need to engage racism in renewed ways. These conversations motivated me to return to the manuscript.

This passage is some of the clearest writing in the book. Certainly, it’s the most self-revelatory. Wendy was told she was “amplifying” whiteness with “objective language” — in other words, she described and quoted some Rightist websites in detail. Then was “devastated” to learn such a presentation was “problematic.” And now she needed to “make a necessary epistemological shift”: i.e., hew closer to the received party-line. We empathize with her, but have to laugh at her naïvete.

BIPOC is Anderson’s favorite acronym. As you may know — but I always forget — BIPOC means Black, Indian, and People of Color, except in the Leftist lexicon, the I is now supposed to mean “indigenous,” in line with the curious belief that Red Indians were in North America since the beginning of time.

Rebirthing a Nation is often a trip down memory lane, with occasional surprises. No doubt you’ve come across the phenomenon of apolitical people who, when the topic turns to white nationalism or far-Right websites, pipe up with: “Oh! Stormfront!” Somehow that venerable old website from Web 1.0 days has found a permanent home in the lizard brain of normies. To Wendy Anderson, it’s still the gold standard, the go-to site for the rancid Right, just as it was in 2005.

And that’s pretty much the level of technical and political awareness one encounters in the various geologic strata of Rebirthing a Nation. Younger readers may need a scorecard to know the players. Remember April Gaede, the Montana horse rancher, with her little blonde twin daughters who sang under the name of Prussian Blue? We meet her again here, repeatedly, just as she was back in 2005. Did you know that the Tea Party movement was regarded as a front for White Supreemism (at least in the fever swamps of BIPOC-Left ideology)? I surely didn’t, not that I ever gave much thought to Tea Party noise back in 2009. Were you aware that S. E. Cupp, the Leftish, bespectacled TV and Twitter personality, was considered a leading spokesperson for Tea Partiers some ten or twelve years ago? I hadn’t a clue. A little closer to the present, Anderson brings in Tara McCarthy, a twinkling starburst in the White Nationalist firmament back around 2016, and memorable mainly because her ancestry had a dash of Jew and East Indian. I hadn’t thought of her in five years, but now I wonder what happened.

Then there’s the mysterious Elena Haskins, the book’s key exemplar of White Nationalist women-who-code, and the likely inspiration for Anderson’s whole project. Back around 2005, it seems, Elena

hand-coded her website to include a six-page gateway structure. On her first page, [she] provided a detailed narrative about the barriers to education that her family experienced due to BIPOC, hyperlinking the following statement, “Click here or on the graphic below to enter.” . . . [On the fifth gateway page one finds] uncited statistics and biting interpretations of people of immigrant status, stereotypes about BIPOC being economic threats, and conspiracy rhetoric about the master-slave relationship between BIPOC and white people.

Anderson is merely describing an amateurish bit of web design. But that’s of little import, because the author is making an effort to seem tech-savvy, so she reads deep significance into Elena’s website — thereby making herself look far sillier than Elena. (Those “gateway” pages are long vanished from the web, by the way, even the Internet Archive’s Wayback Machine.)

Neither World Wide Web technology nor Rightist politics have been static since 2005, to put it mildly. Back then, we coded web pages to look like lush magazine layouts. Then mobile “responsive” web design came along and forced us to throw visual complexity out the window. On the political front, conservative and Right-wing politics then inhabited a series of silos that had little to do with each other. Since about 2013, they’ve become more of a continuum, with libertarianism shading off into Neoreaction and Paleoconservatism, while the paleos seemed to merge gradually into the Alt-Right, New Right, and White Nationalism. The only odd-man-out here is modern “conservatism” of the National Review sort, not really an ideology at all, but a collection of twitches, slogans, and sentiments. Anderson is completely blind to these nuances, because she’s determined to make something of a fragile thesis she conceived in 2005 that has little relevance today.

The author jumbles so many eras and references together, her final product has the distinct pong of an overdue college paper, stuffed full of repetitions and BS — but nice and hefty, with the proper bibliography and endnote apparatus. It’s like she’s eager to get the thing finished and doesn’t much care if anyone reads it. In a sort of daze, she suddenly quotes statistics that are meant to refute the criminality of illegal aliens, but do the opposite:

Only 17 percent of people of immigrant status had a prior violent felony conviction before coming to the United States and only 3.8 percent of those being detained in the US due to violent action in 2010.

Who knows? Maybe 2010 was a slow year for illegal alien crime. But fortunately “only 17 percent” are violent criminals! “Undocumented immigration does not increase violent crime,” she insists, illogically. What she really means is that our native-born nonwhite criminals are holding their own in the crime stats.

One naturally wonders about Anderson’s background and motivation. She has anticipated that. A Midwesterner, from the Twin Cities and Chicago, she tells us repeatedly that her aunt and uncle (evidently childless) adopted “five boys of color.” At least one of these “cousins” acquired a police record, purportedly due to racism in the judicial system. She pleads this bit of family backstory to explain her interest in the online presence of White Nationalist women.

At least I think that’s her idea. My own takeaway is that it explains a confused and disturbed mindset — yet another tragedy of modern society.