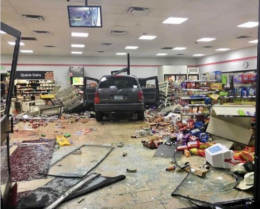 When I was but a wee beardless prepubescent male in the 1960s, there was to be no questioning of the immutable fact that not only was the USA the greatest country in the world at that time, it was the greatest country the world had ever seen. This was a truth that was held to be self-evident by nearly everyone, and if you dared to disagree, you risked a beating.

But these days, when I see self-described American patriots waving the Stars and Stripes and insisting that “we’re #1,” I find something sad and almost pitiable about it. At this point, they might as well be Confederate battle-scene reenactors desperately clutching onto the Lost Cause and insisting that the South will rise again. I wonder whether these latter-day American patriots seem so full of enthusiasm and gumption because they’ve only recently emerged from fifty-year comas.

A few days ago on a message board that I habituate, someone who claims to be an immigrant from Africa trotted out a “we’re #1,” and I asked him to clarify — by what metric are we #1? It’s a nice sentiment, and I wish it were true, but it’s also impossibly vague.

So I decided to do a bit of digging to determine where America ranks across an array of categories — economics, culture, intellect, health, crime, and self-reported happiness. Before you start barking at me, I realize these rankings are arbitrary and probably inaccurate in many ways and for many reasons and it’s hard to tell who’s being honest and who’s doing the counting, but taken as a whole, I feel there are enough laser beams pointing in a sufficient number of directions to form a hologram to give you a sense of where the US might stand in 2021.

I’ll cover the bad first, then the good, and then the categories where the USA ranks #1 — and most of those are bad.

To start with, we are a nation of dolts. Fifty-nine countries have a higher adult literacy [2] rate than the United States. Thirty-one have a higher mean IQ [3]. In standardized testing [4], twenty-five countries outperform Americans.

What was once a land of opportunity where anyone could achieve the American dream if they simply put their nose to the grindstone and pulled themselves up by the bootstraps is softly slipping into a crumbling shopping mall where half of the stores are shuttered. A full one hundred countries have less long-term unemployment [7] than America the Beautiful. A robust hundred and sixty-three nations have a lower national debt-to-GDP ratio [8]. One hundred and twenty-nine countries have a lower tax revenue-to-GDP ratio [9]. Fourteen countries have higher credit ratings [10]. And a mere five nations have a higher total amount of gross public debt [8].

As this country unspools in every possible sense, its citizens grow sicker. In 1950, Americans had the fifteenth-highest life expectancy [11] in the world. We have since slipped all the way down to #40 [12]. We are currently the twelfth most obese [13] country in the world, but if you eliminate Pacific Island nations and Kuwait, we are indisputably the fattest. And only four countries in the world suffer a higher cancer rate [14] than the USA.

Only Australia and Northern Ireland report a higher quotient of mental and substance disorders [15]. America is rated #15 regarding quality of life [16] and #18 according to personal happiness [17] — but they’re not so happy that it prevents them from having the world’s third-highest divorce rate [18]. Or maybe their marriages are so miserable that they instantly become happier after getting divorced. (It worked that way for me twice.)

In this beacon on the hill that is a shining light unto all nations, twenty-four countries are less corrupt [19] than the USA, and that seems generous, as I assume we know almost nothing about the CIA for the plain reason that the CIA is smart enough to reveal almost nothing about itself. In this gleaming republic whose founders made sure to make the First Amendment to its Constitution a guarantee of press freedom [20], we rank #44 in that category.

Now that I’ve gotten the bad stuff out of the way — or at least the stuff that isn’t so bad that we lead the world in it — I’ll allow you a brief break to either vomit or swallow an anti-anxiety pill.

Regarding what’s good — but not so good that we’re #1 — it’s lean pickin’s, my friends. We’re currently second in manufacturing output [23] even though China’s total output nearly doubles ours. We are ranked #2 in global competitiveness [24], fourth in average wage [25], ninth in nominal per-capita income [26], and twelfth in “economic freedom [27],” whatever the hell that means.

A piddling five countries have a higher percentage of college degrees [28], but judging by the intellectual rankings I’ve already enumerated, that may only mean that we have a lot of lousy universities.

Regarding the good things that we are rated to be the absolute best in the world, we are thought to have the strongest military [29] and the highest number of privately owned firearms per capita [30].

And those are the only two good things at which America is quantifiably #1 — military and firearms ownership. That’s it — unless you think it’s a bragging right to be the world’s highest producer of sorghum [30].

No other country comes close to the Land of the Free in both per-capita imprisonment [35] and total number of prisoners [36].

We blow every other country away in terms of total number of immigrants [37] — more than four times as many as the closest competitor, Russia.

I suppose it’s a good thing that the USA still has the world’s strongest military, because in many regards, our economy is among the worst. We’re #1 in foreign debt [38] and #1 in total imports [39] — including oil [30]. We’re the absolute worst in the world regarding our rate of net exports [40] and have the planet’s highest government budget deficit [30] as well as the worst current account balance [30].

The mighty, untouchable empire of my youth has, in the intervening years, metastasized into the “pitiful, helpless giant [41]” about which Richard Nixon warned 51 years ago.

We’re #1? Only in your dreams, Yankee Doodle.

Don’t forget to sign up [42] for the weekly email Counter-Currents Newsletter for exclusive content, offers, and news.