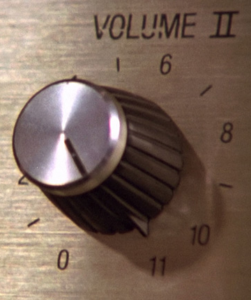 We all know that when you have a hammer, everything looks like a nail. But does it follow that when you understand the culture of critique, every Jew looks hostile? Of course not, but, boy, it’s kind of tempting to think that way, isn’t it?

I think Tobias Langdon might have given in to that temptation a little bit in his engrossing essay “The Spinal Solution [2].” In it, Langdon posits that Rob Reiner’s 1984 satirical rockumentary This is Spinal Tap, while legitimately funny, is “at least in part a Jewish satire of goyim and their ludicrous ways.” He points to the film’s Jewish director and the fact that two of its three lead actors are Jews, and concludes that there is some culture-critiquing afoot.

While This is Spinal Tap is a satire created mostly by Jews, and hostile anti-goy satire does exist (Langdon brings up the excellent example of Sacha Baron Cohen), connecting the two in this case stretches credibility a bit too far in my opinion. I don’t find a secret Jewish agenda in Spinal Tap — despite how I appreciate Langdon’s effort to root one out. Not all satire needs to be hostile (Langdon admits “there seems to be affection in the mockery”) and not everything created by Jews must have sinister ulterior motives. In the case of Spinal Tap we have a satire that stays within the bounds of its subject matter, and, in many cases, points to Truth — sometimes even in a profound manner.

Comparing Spinal Tap with Cohen’s Borat can help clarify this distinction. When Cohen ‘satirizes’ white people, he tends to portray them as both cruel and racist. The former violates the ethics of civilized society, and the latter violates taboos that Jews themselves established and continue to police. The “Running of the Jew” scene in Borat is a great example of this. So is the scene in which a young white man is captured saying racist things in jest after having had a few too many drinks. In Cohen’s worldview, there is a distinct white-nonwhite or Gentile-Jew divide, and the former groups continually infringe upon the latter — never the other way around. There is a clear anti-white agenda at work here, as well as a discernable Jewish identity on the part of the director. We know this because most of the film’s humor relies on the chauvinistic gentile nature of its subjects. Replace these subjects with black or identifiably Jewish ones, and the humor fizzles. Cohen works within the insidious tradition of Jewish writers and filmmakers which makes bashing white gentiles the very point of their art, while portraying Jews (and non-whites in general) as blameless. My review of Nathaniel West’s The Day of the Locust [3] delves further into this particular bias.

Spinal Tap, on the other hand, operates entirely in the absence of race. David St. Hubbins, Nigel Tufnel, Derek Smalls, and the others are spoofed not for their identity as white gentiles or because of their cruelty or taboo-breaking, but for their vanity, pettiness, thickheadedness, pretentiousness, and other amusing peccadillos which were common among rock stars in the 1970s and 1980s. They praise a fellow rocker when they meet him in a hotel lobby, but call him a wanker once he’s out of earshot. They claim to have “armadillos in our trousers,” but an airport security guard reveals that armadillo to be a cucumber wrapped in tinfoil. When asked about the dwindling sizes of the band’s venues, their manager pompously explains that the band has become “more selective with their audience.” Nigel Tufnel boasts about how his amplifier “goes to eleven” but is quickly exposed for not understanding basic math. The bandmembers pay homage to Elvis Presley by singing “Heartbreak Hotel” at his grave, but fail to realize that they are actually disrespecting the King’s memory when they botch his song.

This is all very funny. The filmmakers adhere to the classic comedic formula of finding a lovable mediocrity (Ralph Kramden being the twentieth-century archetype), puffing him up with pretense, and then knocking him down just to see the goofy look on his face. There is absolutely nothing wrong with this. And we shouldn’t hold the Jewishness of the director and stars against them if this is all that they do.

I think the question we should ask is this: If the satire found in This is Spinal Tap evinces a hostile racial agenda on the part of the artist, then what satires don’t do this? Does Oscar Wilde treat his upper-crust subjects any differently in The Importance of Being Earnest? How about the P. G. Wodehouse Jeeves novels? Do these have an “anti-goy” agenda as well? Bertie Wooster and his family qualify as goyim, after all.

Are we willing to hold Eric Idle to the same standard for his role behind the Rutles? All You Need is Cash spoofs with Beatles with the same kind of verve found in Spinal Tap, yet because Idle is not Jewish (and neither was his collaborator, Neil Innes, apparently) is this all just good clean fun in comparison?

I think it is all good fun (although, Langdon makes the point that Spinal Tap is less clean fun than it could have been). Regardless, both films do not impugn the humanity of their subjects, only their petty vanities which come across as funny when viewed at a distance. When Idle, as the Rutles’ documentarian Stanley J. Krammerhead III, Jr. visits the Mississippi Delta to uncover the blues roots of the Rutles [6], he encounters an old black blues singer who tells him that he had singlehandedly influenced the Rutles. The singer gets hilariously undermined, however, when his wife accuses him on camera of lying. She then claims he had said the same thing about non-blues acts such as The Everly Brothers, Frank Sinatra, and Lawrence Welk. The subject being spoofed here is not black people in a racial sense but the fairly well-known trope of garrulous blues singers playing a little loosy-goosy with the truth. In the same satirical spirit, the members of Spinal Tap proclaim the greatness of rock n’ roll while getting lost on their way to the stage.

It seems to me that if the satire in This is Spinal Tap is illegitimate because of a hostile agenda, then we would have little room for satire at all.

Langdon then pursues an interesting argument:

He supports this by quoting the lyrics of a Spinal Tap song called “Big Bottom,” a piquant paean to pleasantly plump posteriors. I have been aware of this song since Spinal Tap came out, and never once did I associate it with anal sex. Some guys are into girls with big butts — there’s nothing in the lyrics that suggests otherwise. And with all the crass innuendo in the song, wouldn’t the writers have indulged in that if they wished to imply something other than traditional intercourse? How hard would it have been to rhyme “I’ll take us up my way” with “Down your Hershey highway” anyway? Stink, sink, pink; taint, ain’t, saint — the opportunities are endless. Not to describe a song like “Big Bottom” as innocent, but within the context Langdon brings it up, I think it is.

Furthermore, it’s not without precedent. Here are some lyrics from the 1978 Queen hit “Fat Bottomed Girls” which also does not mention the unmentionable:

Are you gonna take me home tonight?
Ah, down beside that red firelight
Are you gonna let it all hang out?
Fat bottomed girls
You make the rockin’ world go ’round

Hey I was just a skinny lad
Never knew no good from bad
But I knew life before I left my nursery, huh

Left alone with big fat Fanny
She was such a naughty nanny
Heap big woman, you made a bad boy out of me
Hey hey!
Woo!

Langdon then takes the curious tack of accusing Reiner and the film’s stars of attempting to normalize pedophilia through the Spinal Tap song “Tonight I’m Gonna Rock You,” which, admittedly, has questionable lyrics. But if this is all he has, then his case is fairly weak. Pedophilia (or, really, sex with pubescent yet technically underaged girls) was already a thing in rock n’ roll by the time This is Spinal Tap came out. Jerry Lee Lewis and Chuck Berry had had their moments, as did Led Zeppelin [7]. Ted Nugent allegedly adopted his seventeen-year-old girlfriend just so he could have sex with her. David Bowie, Bill Wyman, Iggy Pop, the list goes on [8]. And how else can we interpret the following lyrics from the Rolling Stones song “Stray Cat Blues”:

There’ll be a feast if you just come upstairs.
It’s no hangin’ matter
It’s no capital crime
I can see that you’re fifteen years old
No, I don’t want your ID

So is it Spinal Tap that’s attempting to normalize this kind of behavior? Or were certain rock n’ rollers already kind of doing this to some extent already? Yes, the reference in “Tonight I’m Gonna Rock You” to a four-foot-tall girl who still has her baby teeth is creepy, and Langdon is correct to ding Spinal Tap for it. But there is another explanation for this besides Jewish exploitation: bad taste. The filmmakers got carried away in this song and thought they were funnier than they really were. Why ascribe something to evil when stupid will do just as well?

My argument boils down to this: the satire in Spinal Tap is fair game because the film accurately portrays its subject matter. (Check out this Key and Peele skit [9] which fails because it doesn’t do this.) The film hit home for many in the rock industry [10], as painful as that must have been for some. Aerosmith’s Steven Tyler was embarrassed by Spinal Tap and admitted that the scene in which a band member threw a tantrum over the catered food at a concert was quite real. U2’s The Edge claimed he didn’t laugh during the film, he cried — because it was so real. In light of all this truth, the fact that most of the film’s creators are Jewish should make no difference.

Before ending this essay I would like to offer two caveats. One, I am fully aware that Rob Reiner is one of our more hateful and committed enemies. If the Trump administration did anything, it caused this flabby walrus of a has-been to show his true off-white colors. The filter flies off of Reiner’s fat face whenever he discusses Trump or his supporters — a revolting spectacle to behold. Here’s a quick taste:

The President of the United States is a racist. He’s made it abundantly clear his re-election is based on white nationalism. If you support him, there can be no distinction between you being a racist and a racist enabler. They are the same.

So yes, I am aware that someone like Rob Reiner would have no qualms regarding the kind of Jewish subversion Langdon discusses. But this doesn’t necessarily mean that Spinal Tap amounts to that very thing. We would need proof in the film itself, not in the fact that its director turned into an asshole thirty years after the fact.

Secondly, as much as I disagree with Tobias Langdon regarding This Is Spinal Tap, I’m really glad he wrote his essay. Whites need to sharpen their minds when interpreting the art and media we consume. We need to be on the lookout for the anti-white agenda he discusses and be prepared to counter it. And since Jews are the most effective perpetrators of anti-white subversion, we need to be especially cognizant of the roles they play and the themes they tend to promote. Brenton Sanderson’s review of Mike Nichols’ The Graduate [12] is a great example.

We just need to make sure that there’s smoke before yelling fire.