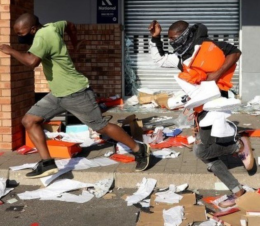 As I watched the looting and burning and robbing and shooting and destroying and absolutely insane swarming-ant mob violence in South Africa over the past few days, I felt slightly better about living in America.

I’ve known two separate girls, decades apart, who each took a year touring the world while working on a cruise ship, and both of them, without ever meeting one another, volunteered that Greece and South Africa were the most beautiful places on the planet.

What a wonderful place South Africa has become after the evil iron hand of white supremacy has lost its grip. Unemployment hovers around 33%, nearly 13% of the population has HIV, and this land of unparalleled natural beauty is known as the “rape capital of the world.”

But hey — at least they’re not Somalia!

This latest burst of mass ultraviolence was said to be ignited by the incarceration of former President Jacob Zuma, a frog-faced [2] proud Zulu whose middle name, Gedleyihlekisa, means “one who smiles while causing you harm” in his native tongue. Like so many of his kinsmen, he has eagerly sung “Kill the Boers,” accused Westerners of getting “bent out of shape” over mass slaughters of white farmers, and once was acquitted of raping an HIV-positive woman but admitted he’d showered after having consensual sex with her to avoid getting the AIDS all over him.

Zuma was South Africa’s president from 2009-2018 and has faced what seems like 60 million corruption and fraud charges over the years. He was recently reindicted on corruption charges, decided it would be a good idea to skip a court hearing, and was jailed, which sent his devoted Zulu followers into a burst of primate frenzy that observers say hasn’t been seen since the fall of apartheid.

The rioting and looting began on Friday, July 9. As of this writing on Wednesday night, there have been at least 75 reported deaths in connection with rioting that has spread throughout the country, an estimate which seems a wee bit low to my blue eyes. Nearly half of the deaths appear to have occurred as a result of stampedes by overanxious looters, and many others seem to have come from vigilantes [3] — white [4], Indian [5], and even black [6] — who don’t quite cotton to having their residences invaded [7] or being whipped [8] by hostile Negroes. Zuma’s family has been criticized for going on social media and encouraging further violence until he is released.

According to a 2011 census, South Africa’s population is 79.2% black African, 8.9% white, and 2.5% Indian or Asian. Many feel that without whites and Indians to power the economy, South Africa would be as backwards and uncivilized as South Sudan. According to eyewitness reports, white and Indian property owners have teamed up [11] to shoot at the rock-throwing looters. Muslims [12], too, are organizing to protect their communities from being Zulu-cided.

This is one area in which I’ll give South Africa the edge over America — at least people fight back against rioters.

And since this is Africa, there is of course murderous intra-tribal animus among the darkies. Current South African President Cyril Ramaphosa has mentioned more than once that the recent riots are inspired in part by “ethnic mobilization,” by which he seems to mean the eruption of old resentments by once-warring clans.

Apparently seeking to recreate the “Ferguson Effect” in their own shithole, the looters are doing everything within their power to ensure the country winds up even more hopelessly far gone than it was only a week ago. According to one report, rioting blacks have already looted every last scrap of food in Zuma’s home province of KwaZulu-Natal. Farms are being set on fire. Huge parts of a major highway known as N3, which runs from the port of Durban to Johannesburg, have been blocked by looters. Unable to reach their destinations — or learning that their destinations have already been ransacked and burnt to the ground — trucks are dumping their fresh milk [13] on the side of the highway. Some estimate that the entire nation’s food supply will run out in two weeks, leading to further rioting and deeper incursions into the wealthier suburbs.

As of Monday, over 200 malls had already been destroyed. Looters have been spotted torching farmland, setting chemical plants on fire, attacking water-treatment facilities, plundering shipping containers, and burning electronics plants to the ground. The country’s biggest oil refinery shut down to protect itself in the face of the growing “unrest.”

When I experience unrest, I take melatonin. I don’t burn down buildings and loot shopping malls. Then again, I’m not an African.

“What we are witnessing now are opportunistic acts of criminality, with groups of people instigating chaos merely as a cover for looting and theft,” President Ramaphosa said on national television. “The poor and the marginalized will bear the ultimate brunt of the destruction that’s currently underway.” As he delivered his speech, video footage [14] played behind him showing a blood bank being looted in Durban.

For the first few days, police were entirely overwhelmed. Many of them were spotted looting as well. But while their country burned, at least a few police made sure to close a supermarket for violating COVID-19 [15] restrictions.

What happens when the food runs out?

It seems natural that the black looters will push deeper into white and Asian enclaves. Realizing that they are severely outnumbered and will get no sympathy from the majority-black government, the whites and Asians may start shooting. Nearly three decades after apartheid ended and an Iron Rainbow was constructed over South Africa — leading to untold joy among idiot musicians [16] — a full-scale race war may emerge.

That race war will likely include tribal bloodbaths between warring African clans.

And they can’t blame white supremacy this time around, or not nearly as convincingly as they blamed it in the 1990s. South Africa has been under black rule since 1994. And as seems to be the case everywhere on Earth where blacks rule, things fall apart.

How many Americans, assuming their eyes are still working, will view the footage from South Africa and begin to suspect that everything they’ve heard about black “oppression” is a lie? How many will be motivated to do anything about it? And what exactly can they do, even if motivated?

No need to fret your pretty little head about it, though. At least we’re not South Africa.