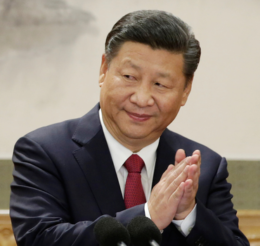 The old Cold War was, among many other things, a struggle between a pair of universal franchises, each of which rested on the assumption that its peculiar package of ideas, institutions, and idiosyncrasies bore no necessary relationship to ethnicity. Thus, a Bohunk from Milwaukee gave a hand-held missile to Ghazi from Ghazni, so that the latter might send it up the tailpipe of a MiG flown by a mujik who bore a striking resemblance to Cousin Stanislaus from the Old Neighborhood. The current cold war is different. While one side perseveres in the presumption that its principles, practices, and (increasingly peculiar) peculiarities pertain to the entirety of humanity, the other has come to define itself in terms of race.

In the years when China served (and, indeed, strove to lead) the global Communist revolution, the authorities in Sinkiang subjected many comrades of Turkic descent to painful periods of re-education. Now that Chinese Communism has shed its international scaffolding, such brainwashing is but the icing on the cake of a comprehensive program of enchinoisement. In the old days, success was measured by the ability of the survivors of such schooling to mumble “dialectical materialism” at the appropriate time and place. Today, the job is not finished until a half-Han baby has been wrought in the womb of a Uyghur woman.

The embrace of race by the people in power in Peking is bad news for those who would preserve the independence of places like Taiwan and Singapore. In the near future, such outposts of Chinese ethnicity and culture will be no more resistant to integration into the Mainland than the Federal Republic of Austria of 1938 could avoid the amalgamation of its land and people into the Greater German Reich. (Pace Christopher Plummer, Julie Andrews, and the rest of the cast of The Sound of Music, the Anschluß was insanely popular in the Land of Lederhosen. Indeed, the joining of the two polities proved so smooth that, rather than being disbanded, dispersed, or even diluted, the armed forces of the old Republic were simply grafted onto the Wehrmacht.)

At the same time, the presumption that all people of Chinese descent owe fealty to the Middle Kingdom offers considerable benefits to peoples of European heritage. For one thing, it weakens the tendency towards universalism that, over the course of the last century or so, has done so much to damage the amour propre of white nations. For another, it makes it easier for us to explain that the movement of momentarily malcontented Mongoloids to once-and-future Haole havens, whether in Britain or British Columbia, is nothing less than the planting of Chinese colonies. (When explaining this phenomenon, it may be helpful to compare emigrant enthusiasts for the short-lived special status of Hong Kong to the Englishmen who settled North America in the seventeenth century. Notwithstanding their deep dissatisfaction with the ways things were being done in the Mother Country, neither distance nor disaffection deprived the Puritans of the differences that distinguished them from folk who lacked the good sense to have been born to English parents.)

The revival of Sinocentric solipsism did not take place overnight. It took several decades for the minions of Mao Tse-dung to fully realize that the bonds born of blood, breeding, and birth would usually prove stronger than those forged in the feeble fires of fascination with the labor theory of value. Similarly, many years may pass before influential folk in the West come to comparable conclusions, years in which the likes of us should respond to every tale of Chinese triumph with “I wonder if this has anything to do with the way they define membership in their nation.”