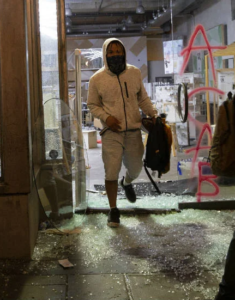 It’s remarkable, astounding, depressing, confounding, perplexing, and infuriating to behold the lengths to which Wikipedia will go to deny black Americans the overdue credit for something at which they truly excel — namely, crime.

Since it’s undeniable that we live in patriarchy, one never hears an endless litany of excuses and alibis for why men commit more crime than women. Just as it’s understood that horses are better at long-distance running than squirrels, it’s taken as an article of faith that men are simply fantastic at crime in ways that women could never hope to match.

But since we live in what science has proved to be a white-supremacist society, the closet Klansmen over at Wikipedia fairly tie their own testicles in knots in their fumbling attempts to reason away black overachievement in crime rather than simply using Occam’s Razor to cut to the quick by acknowledging, “Despite all the roadblocks that our society places on the pathway to success in an attempt to impede black excellence, blacks have kept their eyes on the prize and continue to shame all other racial groups in the per-capita commission of crime.”

In the first paragraph of Wikipedia’s guide to “Race and crime in the United States [2],” the editors are forced to acknowledge that “Crime rates vary significantly between racial groups.”

Okay, that seems as if we’re off to a good start. But then they go and obscure the obvious in the very next sentence by adding, “Most homicide victims in the United States are of the same race as the perpetrator.”

While that’s technically true, it’s not nearly as statistically impressive as the statement, “Most homicide perpetrators in the United States are of the black race.” But that sentence is nowhere to be found in Wikipedia’s article, suggesting a heavy anti-black bias.

Instead, they look away as if the FBI Uniform Crime Reports were the sun and that you’d go blind from staring at them for more than five seconds in favor of citing a lone study from North Carolina that claimed “contraband is found at higher rates in whites who are stopped” by police.

Not once are things such as an overabundance of testosterone and a lack of IQ presented as possible causative factors in black crime.

They also repeatedly cite “racial discrimination” in a dishonest and frankly dastardly attempt to avert your attention from the fact that until very recently, “discriminate” was synonymous with “differentiate” and had nothing to do with “unfairly treating a certain group of people who wind up excelling at crime despite your all your efforts to suppress their obvious superiority in this area.”

In a bygone era, “discriminate” merely meant the act of telling the difference between things. So after taking a discriminating look at American crime stats, I can state without any diminution of my ego as a white man that when it comes to crime, I am an unabashed black supremacist.

Wikipedia’s white-supremacist editors even go so far as to deny blacks their nonpareil ability to kill other blacks:

The term “black-on-black” violence has been criticized for being misleading and racially charged. One columnist writing in the wake of the murder of George Floyd has accused opponents of the Black Lives Matter movement of using “blacks killing blacks” rhetoric to avoid discussions about police brutality.

Ay yi yi, how does a sincere anti-racist activist such as myself unpack this?

According to one tally [5], police killed a grand total of 14 unarmed blacks in America in the year 2019. According to another tally [6], 7,484 blacks were murdered during the same year. Seeing as how annual reports consistently show that over 90% of black murder victims are killed by other blacks, at least 6,735 blacks gave up the ghost at the hands of their co-blacks in the year 2019.

That means that for every unarmed black killed by police — both white and black — in 2019, at least 481 blacks were slain by their brothers in negritude.

Could it be, then, that this “police brutality” rhetoric is used to avoid discussions about black-on-black violence? Sure as shootin’ seems so, sheriff.

The FBI’s Uniform Crime Reports (UCR) are flawed in several ways. One is that they are based on data provided by undeniably bigoted and anti-negro police officials across the nation. The other is that they focus only on arrests rather than actual crimes committed. This proves that all the “official stats” we see are filtered like tainted coffee through white-supremacist kidneys. Then again, the National Crime Victimization Survey — which uses crime victims’ own descriptions of their perpetrators, and crime victims usually are motivated to accurately describe their assailants in the service of facilitating their eventual capture — closely coincide with the FBI’s stats regarding black overperformance in crime, so ignore everything I previously said in this paragraph.

Alas, the 2020 FBI UCR stats won’t be released for another couple of months. Being the equivalent of a premature ejaculator when it comes to perusing black crime stats, I couldn’t wait until September, so like an earnest youth in the 1950s scanning a yellowed and dog-eared copy of Playboy rather than waiting for the new issue, I must satisfy myself with the 2019 FBI stats [7].

Those 2019 numbers, despite Wikipedia’s mendacious efforts to deny black Americans their place in the sun regarding criminal prowess, prove what I’ve been trying to say in blacks’ defense throughout this article — they are as good at crime as they are at basketball.

Table 43A of the 2019 FBI Uniform Crime reports counts total arrests by race and ethnicity. And since the US Census [8] shows that blacks comprised 13.4% of the American population in 2019, the FBI proves — undoubtedly to the consternation, befuddlement, and chagrin of the info-Nazis over at Wikipedia — that there is not a single category of crime in which blacks do not exceed their quotient of the populace.

In only three categories — all of them involving alcohol — do blacks barely eclipse their percentage of the public. When it comes to violating liquor laws (15.5%), drunkenness (14.8%), and driving under the influence (14.1%), our ex-Africans may require government assistance in getting their numbers higher. Then again, statistics show that whites are more prone to alcoholism [9] than blacks and that blacks are less likely than whites to own a car [10].

But in nearly every other category of crime — including “white collar” crimes such as embezzlement and fraud — blacks perform at a clip twice as high, and often much higher, than their percentage of the population. I was a bit surprised, and frankly a tad disappointed, to see their quotient of rape arrests clocking in at a piddling 26.7%, but Wikipedia says that black women are the least likely to report rape unless it’s by a stranger. This leads me to assume that black women impede public knowledge of black crime excellence by their reluctance to call the police after black men rape them — either that, or they clearly enjoy it.

In 2019, black suspects accounted for 51.2% of total arrests for murder and nonnegligent manslaughter, proving as they do every year that when it comes to killing, they are Jesse Owens-level Olympians. Even more impressively, they even one-upped their murder stats by comprising 52.7% of all arrestees for robbery.

One troubling aspect of the FBI Uniform Crime Reports for 2019 that almost escaped my notice and that seems to entirely escape public scrutiny is the fact that Asians, just as they do in testosterone, stand at the other end of the crime spectrum compared to blacks. Clocking in at just under 6% [8] of the population in 2019, Asians only exceeded this quotient in two areas of crime — gambling (11.3%) and prostitution and commercialized vice (6.1%). In every other category of crime, Asians barely exceeded 2% of those arrested.

Based on these alarming statistics, the only conclusion I can draw is that both the FBI and the editors of Wikipedia hate Asians.