According to Anatoly Karlin at the Unz Review, the photo below is evidence of how [2] “kneeling before Anglo ambassadors seems to be becoming something of a Ukrainian military tradition”: 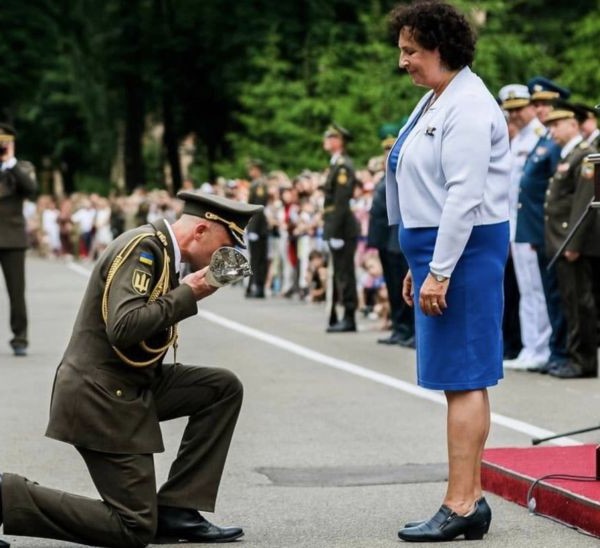 I think Anatoly needs to take his jaydar [4] in for servicing. As soon as I saw the photo, I thought: “That’s a Jew, not an Anglo.” The woman is ugly, ill-dressed, and unshapely in a characteristically Jewish way. Sure enough, Melinda Simmons, the current British ambassador to Ukraine, is 100% Jewish. Indeed, the website Jewish News has boasted of how [5] her appointment “completes a unique triumvirate, with Ukraine now having a Jewish ambassador from the UK, Prime Minister, and President.”

Just as surely, Karlin made no mention of Simmons’ glaring Jewishness or of that “unique [Jewish] triumvirate” in his article. But he did mockingly note that: “It’s pretty funny. The svidomy [Ukrainians [6]] kneel to the Anglos. Who kneel to the Blacks. The svidomy are begging their way into a foreign hierarchy at rock bottom and are not even getting paid for abasing themselves so. Very cringe to observe.”

Clearly, the “foreign hierarchy” is Jewish, not Anglo, and Ukraine is abasing itself before Jews, not Anglos. And it’s Jews who created the minority worship [7] wherein Western whites kneel to blacks. For more proof of the true nature of the “foreign hierarchy,” here’s a photo [8] of the American president Joe Biden kneeling in the Oval Office before the Israeli President Reuven Rivlin and Rivlin’s chief-of-staff Rivka Ravitz: 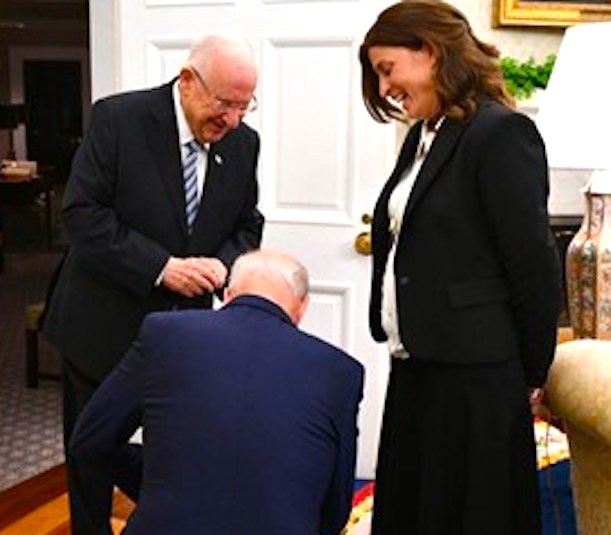 Like the Jewish David Cole [10] at Taki Mag, the part-Jewish [11] Anatoly Karlin is an intelligent and interesting writer. But when I read something by either Cole or Karlin, I always feel as though they’re trying to pick my pocket, even when their dishonesty is not obvious.

But Karlin’s dishonesty was obvious when he wrote about the “Anglo Ogress,” as you might call Melinda Simmons. Her Jewish ugliness really is something to behold. So is the gentile beauty of Vlada Zinchenko [12], the wife of one of the Ukrainian soccer players recently beaten by England at the 2020 Euros Championship: 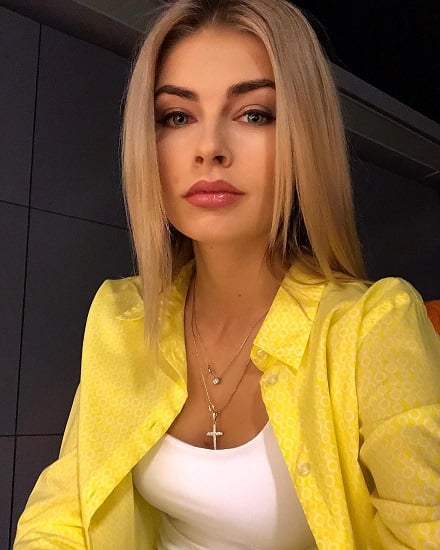 I don’t think it’s good that the race that produced an ogress like Melinda Simmons has power over the race that produced a belle like Vlada Zinchenko. When beauty-hating communist Jews came to power in that region early in the twentieth century, they murdered millions of Ukrainian goyim by famine in the little-known Holodomor [14]. Early in the 21st century, beauty-hating neoconservative Jews again have enormous power in that region. And so I fear for Ukrainian goyim again. Here’s a related image that contrasts Jewish ugliness with goyish beauty: 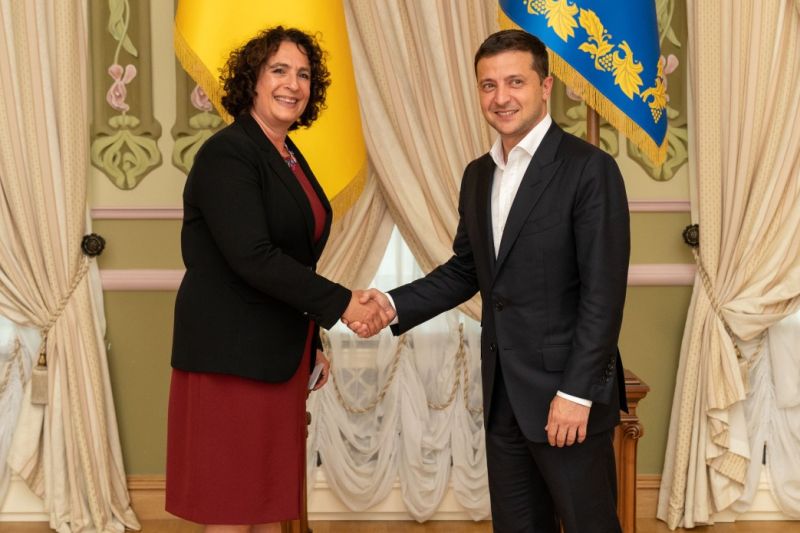 That photo shows two of the unique Jewish triumvirate in Ukraine: the Anglo Ogress Melinda Simmons is shaking the hand of the Ukrainian president Volodymyr Zelensky. I’m struck by the tasteful and understated gentile decorations behind the two Jews: the curves and pleating of the curtains, the art-nouveau harmony of the vertical designs on the wall, and the gorgeous blue-gold of the Ukrainian presidential flag [16] on the right. Blue and yellow are complementary colors that contrast in an eye-pleasing, even eye-blessing way. The other flag in the photo is pure gold and beautiful in a different way. I would say that gentiles value gold for its beauty — its rich color, its luster, its glow. And gold has associations with the sun and with golden grain ripened by the sun.

You’ve probably never heard of him

Ukrainian gentiles chose gold for their flags because gold is beautiful and has those associations, not because gold has monetary worth. But when two Jews stand before golden flags in Ukraine, I’m reminded of a gold-thirsty Jew in neighboring Moldova. Like the Jewish genocide-by-famine known as the Holodomor [14], the Jewish fraudster Ilan Shor [17] is little-known, despite his remarkable achievements: He possibly stole more money, as a fraction of national income, than anyone else in history. [18]

In 2014, $1 billion disappeared from three Moldovan banks: Banca de Economii, Unibank and Banca Socială. The bank fraud in Moldova was a coordinated effort involving all three banks working together to extract as much loan finance as possible from the banks without any obvious business rationale. Ilan Shor, a Moldovan businessman, masterminded the scam. Shor was chairman of the board at Banca de Economii (Savings Bank) up to November 28, 2014. Funds worth $1 billion were transferred to United Kingdom and Hong Kong shell companies used to conceal the real owners of assets, then deposited in Latvian bank accounts under the names of various foreigners. The total loss from the scheme was equivalent to 12% of Moldova’s GDP. 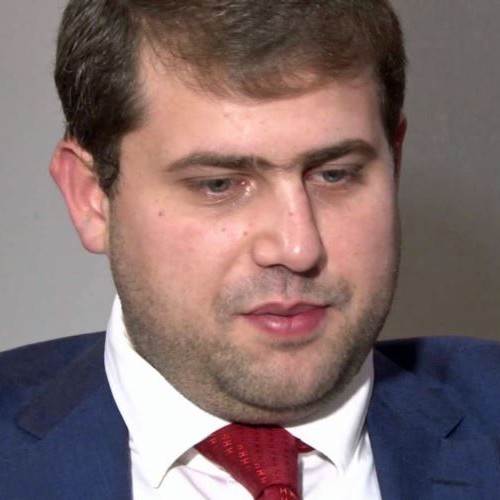 Shor was born in Tel Aviv in 1987, but moved to Moldova with his Moldovan-Jewish parents in about 1990. After his remarkable financial feats on goyish soil, he fled back to Israel to avoid a prison sentence. The Jewish Telegraphic Agency thereupon complained that [20] “Moldova’s Jews feel an anti-semitic backlash after a corrupt Jewish politician flees to Israel.”

Indeed, I wonder whether one reason that Jews steal so much from Slavic countries is to ensure a ready supply of impoverished young Slavic women for the insatiable Jewish sex-industrial complex. After the fall of communism, Jews based in the former Soviet Union collaborated with Jews based in America to loot gentile wealth [22] and assets on a world-historic scale (as Jews did after [23] the communist revolution). Life expectancy fell in Russia as a result, and desperate young Slavic women were shipped all over the world by Jewish pimps and pornographers. But I don’t think that a Jewish woman who looks like Melinda Simmons is going to worry much about the welfare of Slavic women who look like Vlada Zinchenko.

As a beautiful blonde, Vlada Zinchenko is golden in another kind of way. As I explained in “The Empress’s New Clothes [24],” I think beautiful gentile women like her can be regarded as works of art, because their faces, bodies, and hair have been shaped by the preferences of gentile men over thousands of years. But gentile men were shaping literal works of art at the same time and in the same region. And they sometimes chose gold for their art, as you can see in these wonderful sculptures by unknown Scythian craftsmen working more than two millennia ago: 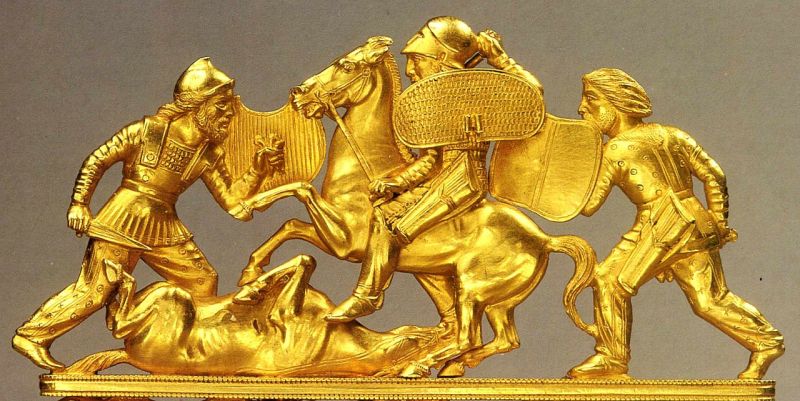 Golden art by unknown Scythian craftsmen from c. 400 BC — top of comb with battle scene 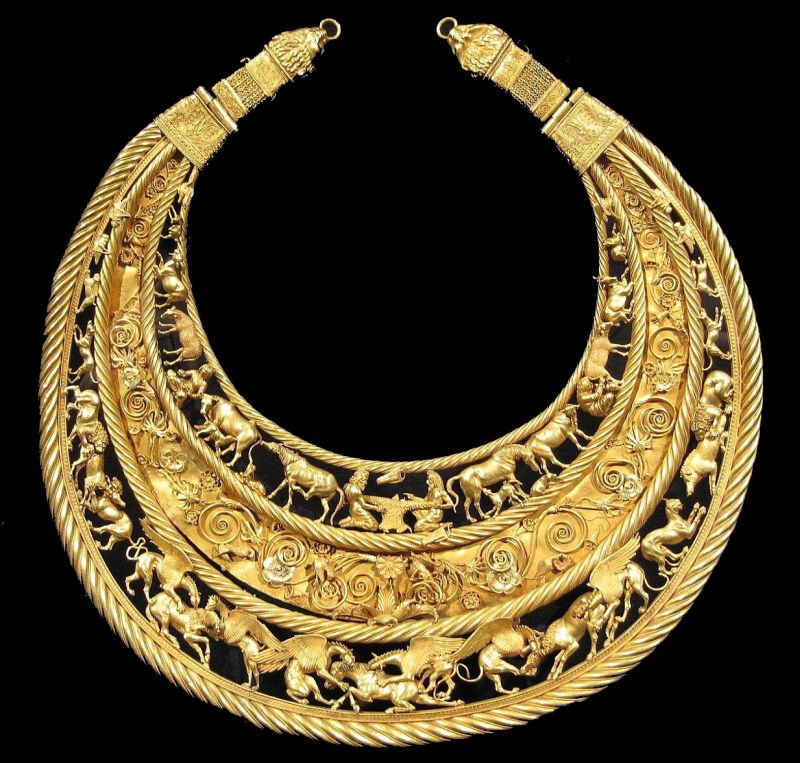 The Scythians were a group of nomadic races [27] who occupied vast stretches of territory on the Eurasian steppe, including what is now Ukraine and Moldova. To the ancient Greeks, the Scythians were archetypal barbarians: fierce, war-like, living without permanent settlements or a written language. But the Greeks and Scythians shared a gentile ability to appreciate and create beauty: there is genius in that Scythian art. Goys turn gold into beauty; Jews turn gold into power. And that’s why a Ukrainian goy and an American goy are kneeling before Jews in the photos at the beginning of this article.

Implacable enemies of an indissoluble Trinity

But part-Jewish Anatoly Karlin didn’t speak the truth about the Ukrainian goy and the Jewess before whom the goy was kneeling. That’s another difference between goys and Jews, and again it’s reflected in the Scythian art. The craftsmen have represented animals with breathtaking accuracy and naturalism. You can recognize everything from lions and horses to hares and even grasshoppers (see the upper right of the pectoral).

The winged griffins are mythical, of course, but they combine features taken from real animals. Even in their flights of fancy, goys are faithful to the truth. Jews, by contrast, are faithful to themselves. As the great Catholic writer Hilaire Belloc [28] (1870-1953) once wrote [29]:

[T]here is (as the greatest of the ancient Greeks discovered) a certain indissoluble Trinity of Truth, Beauty and Goodness. You cannot deny or attack one of these three without at the same time denying or attacking both the others.

In the 21st century, Jews are still the implacable enemies of Belloc’s indissoluble Trinity.

Don’t forget to sign up [30] for the weekly email Counter-Currents Newsletter for exclusive content, offers, and news.