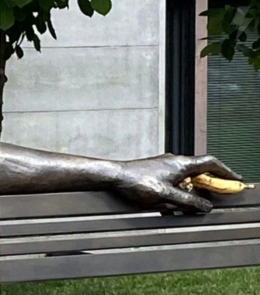 A banana in the hands of the George Floyd statue in Newark, New Jersey

Remember when that fat alcoholic woman-killer Ted Kennedy assured us that the Immigration and Nationality Act of 1965 wouldn’t alter the nation’s demographics?

Well, he was either dumb or lying — probably both.

In 1965, the USA was 84% non-Hispanic white. According to recently released Census Bureau estimates [2] as reported by the Brookings Institution, America’s quotient of non-Hispanic whites dipped down to a holding-on-for-dear-life 59.7% in 2020.

So the same nation that once counted slaves as 3/5ths of a person is now a nation where whites aren’t even 3/5ths of its people:

These new estimates show annual population changes by race and ethnicity between July 2010 and July 2020. They indicate that, for each year since 2016, the nation’s white population dropped in size. Thus, all of U.S. population growth from 2016 to 2020 comes from gains in people of color.

An even more significant and startling fact is that in 2020, America’s under-18 population was, for the first time in the nation’s history, majority nonwhite.

Whites were the only racial group that suffered a net loss in population over the past decade. The fastest-growing group was Hispanics, and not primarily due to immigration — their net gains from prodigious breeding were more than three times higher than their increases from border-hopping.

People who write things such as that belong in an institution.

Nicole Ellis [3] is a black woman who, despite the innate disadvantages that come with being born a black woman in America — or anywhere, really — has a gig writing and doing a podcast for the Washington Post.

Resmaa Menakem [4] is a black therapist with a self-segregating name who concentrates on blackness and black issues in the blackest way his black ass can manage.

Rebecca Toporek [5] is a San Francisco-based counselor who cites articles such as “Anti-Semitism and Insensitivity Toward Jews by the Counseling Profession [6],” so it appears she’s a touchy chick with obvious cultural biases and a healthy-sized female foreskin in the game.

On a recent podcast hosted by Ellis, these three cultural stooges, none of whom are white, encouraged white people to feel shame and gather together into all-white “accountability groups [7]” that may have to last years until all whites concerned feel sufficiently awful about themselves that they can reenter this increasingly antiwhite society without experiencing too much cognitive dissonance.

Menakem added: “White people need to start getting together specifically around race.”

White people self-segregating in order to speak specifically about race? Remove the needless psychological self-abuse, and it sounds like a plan!

Michael Eric Dyson [8] is an extremely light-skinned and egregiously plump black man who seems to wish as if he could burn every last bit of whiteness out of his body as if it were a wooden cross at a Klan rally.

In a recent interview with MSNBC [9], this hi-yella ingrate referred to Trump supporters as “maggots”:

“I resent as an intellectual and as a Black person in America that we have taken the brunt of anti-intellectualism.”

I resent that this guy refers to himself as an intellectual and doesn’t realize that black Americans carry a disproportionate share of American anti-intellectualism.

We have borne the brunt of being disloyal to this nation. And we have stood by to see mediocre mealy-mouthed snowflake White men who are incapable of taking critique, who are willing to dole out infamous repudiations of the humanity of the other and yet they call us snowflakes and they are the biggest flakes of snow to hit the Earth. . . . They’re scared of, “oh, my God, critical race theory is going to kill your mother.” They are not critical, they have no race and they don’t understand theory. . . .Yet they are allowed to wax eloquently about the means and limits of rationality in this country and they couldn’t save themselves if the world depended on it.

Correct me if I’m wrong, Professor Dyson, but I’m pretty sure those mediocre white men saved you from a world with no air-conditioning where your tribesmen would shove their arms up to the elbow inside a cow’s vagina thinking it would bring them good luck.

But if they have “no race,” whom exactly are you talking about when you refer to “white men”? Do you even hear yourself? If you don’t, I’d suggest you buy a recording device invented by a white man and then play back the tape.

You can buy Jim Goad’s Whiteness: The Original Sin here [11].

Biden: C’Mon, Man, We Got the Nukes

Not only am I certain that President Joseph Robinette Biden can’t walk and chew gum at the same time, I’m reasonably sure he can’t utter a complete sentence without pooping his diapers.

He managed to hold a doddering press briefing on Wednesday where he was supposed to address America’s spiking crime wave but managed to avoid blaming black people and instead portrayed white American nationalists as the nation’s biggest looming threat. He also echoed a sentiment aired three years ago by erstwhile Democratic presidential candidate Eric Swalwell [12] to the effect that any armed anti-government insurgency would be “a short war” because the feds have the nukes.

In between gulping down stool softeners, Biden said [13], “The Second Amendment from the day it was passed limited the type of people who own a gun and what type of weapon you could own. You couldn’t buy a cannon.”

Not true. There is no “cannon clause” in the Second Amendment. He continued:

Wait — is that a suggestion? Should patriots take that under advisement?

It remains a cruel and depressing fact that America’s military-industrial-intelligence complex would likely have no trouble crushing any armed insurgency in a matter of minutes — even faster than Biden takes to complete a sentence. One would like to have at least a glimmer of hope that this is untrue, but it seems as likely as me being able to sprout angel wings and flap my way to Vegas.

Robin DiAngelo: Being Nice to Black People Is Racist

From everything I’ve ever seen of her miserable face [14] and every word I’ve ever seen issue from her self-righteous lips, Robin DiAngelo, author of White Fragility, is a fragile white person of the highest order — she appears to be made of wafer-thin material that a mere puff of wind would cause to shatter into a million pieces.

In keeping with her typical shame-filled yet shameless style, DiAngelo’s new book is called Nice Racism: How Progressive White People Perpetuate Racial Harm. As is her wont, for reasons that seem too horrifying for me to even ponder or dare investigating, DiAngelo is doing yet another self-flogging striptease for black people by telling black people how awful she is for trying to convince them she’s not awful — and hopefully in the process, they won’t think she’s as awful as everyone can immediately sense that she is before she even opens her mouth.

A recent profile on CNN [15] reveals that, but of course, DiAngelo had reached college age with no black friends and almost no day-to-day experience with black people (must be nice). But one night she was privileged enough to have dinner with a young black couple and spent the evening regaling/boring them with one story after the next about how racist her family was, and she kept going and going despite sensing that she was making the black couple uneasy.

I thought what I was doing was showing that I recognized how racist these things were, and I would never do them. I was a nice White progressive, but what I was actually doing was both objectifying that couple by bringing the conversation to race immediately in a way I would never have if they were White and then subjecting them to all those racist comments and jokes all night long.

I have more faith in black Americans than many things I say would lead you to believe. This faith extends to the sincere wish that most black Americans are as repelled by this fake-ass white bitch as I am. Perhaps an interracial coalition of hating Robin DiAngelo and every white person like her is this sagging nation’s only hope.

The Public Crucifixion of Derek Chauvin

This is the face [16] of a man who has been driven mad by the blunt force of institutional social-justice bloodlust. On Friday, former Minneapolis police officer and now eternal white whipping boy Derek Chauvin was sentenced to 22.5 years in prison for essentially failing to resurrect George Floyd from the dead after he passed into the great big bamboo hut in the sky from a fentanyl overdose.

The typical sentence in Minnesota for a first-time offender convicted of second-degree unintentional murder is 12.5 years. And although the sentencing judge insisted he did not make his ruling based on public “sympathy,” he also told Floyd’s surviving family members that they have “our sympathies.”

Naturally, there were those who protested that Chauvin got a mere slap on the wrist and reminded us that George Floyd could still be alive to pass counterfeit bills, hold black women at gunpoint, neglect his children, do opiates, and wave bananas in convenience stores [17].

Birth of a Karen

“Karen” is a derogatory term for white women who call the police when black people commit crime. If you know anything about crime, you’d know that black women commit a LOT of crime — it’s one of the things at which they truly excel far more than any other Americans. But recent propaganda would have us believe that it’s the “Karens,” rather than the blacks committing rape and robbery and murder in numbers far beyond their quotient of the population, who are the real terroristic threat.

Karen is the name of a new film yet to be released on the BET network in which a white woman in a ritzy Atlanta neighborhood scares the bejeezus out of a young, clean, friendly, and not-at-all threatening black couple who move in next to her. She is depicted with all of the depth and nuance that Linda Blair employed to portray a sweet young white girl in The Exorcist.

The “Karen” meme, especially as peddled by movies such as this, would also lead one to believe that when black people move into a neighborhood, they’re the ones who have to worry about being terrorized.

The world has been upside down for some time now. Can you feel the blood rushing to your head?