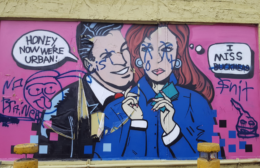 Dr. Donald Moss looks like the sort of phenotypically Caucasian person who postures as an expert on race but is so utterly clueless about race, he probably doesn’t realize that he’s the type of easy-to-spot weakling who’d be the first to get stomped to death — by both sides — should a race war ever erupt.

Last week’s news brought sad tidings of a brown-skinned female Manhattan psychiatrist who gave a lecture at Yale about “The Psychopathic Problem of the White Mind”; this week, it is with deep regret that I announce that Moss, who is yet another NYC-based psychoanalyst, has published an allegedly academic paper called “On Having Whiteness” that is being published all over the place, including this US government website.

As someone who’s both read and reviewed Mein Kampf, I feel it incumbent upon me to opine that as far as generating palpable waves of genocidal hatred goes, Hitler had nothing on these latter-day NYC shrinks.

Here is the abstract of “On Having Whiteness” in its entirety:

Whiteness is a condition one first acquires and then one has-a malignant, parasitic-like condition to which “white” people have a particular susceptibility. The condition is foundational, generating characteristic ways of being in one’s body, in one’s mind, and in one’s world. Parasitic Whiteness renders its hosts’ appetites voracious, insatiable, and perverse. These deformed appetites particularly target nonwhite peoples. Once established, these appetites are nearly impossible to eliminate. Effective treatment consists of a combination of psychic and social-historical interventions. Such interventions can reasonably aim only to reshape Whiteness’s infiltrated appetites-to reduce their intensity, redistribute their aims, and occasionally turn those aims toward the work of reparation. When remembered and represented, the ravages wreaked by the chronic condition can function either as warning (“never again”) or as temptation (“great again”). Memorialization alone, therefore, is no guarantee against regression. There is not yet a permanent cure.

“Permanent cure” sure sounds like “final solution” to me. Is it wrong to hope that one day in the not-too-distant future, the only people left in Manhattan are white-hating psychoanalysts and starving nonwhite homeless people who can’t afford their services?

We Didn’t Start the Fire — A Fat Black Student Did

It is an established medical fact that four out of every five black American women are either overweight or obese. It is also a matter of rude speculation that there are probably not four or five total black women in sub-Saharan Africa who are overweight or obese.

But despite all the free donuts and Jolly Ranchers we throw at them, black American women insist on being morbidly unhappy. And despite the popular canard that white racists are gleefully committing violent acts of hatred against blacks from sea to shining sea, apparently it’s not enough hate to keep fat black women happy, so they feel compelled to pick up the slack.

Until very recently, Victoria Unanka was a student at Viterbo University in La Crosse, Wisconsin, a city that according to the 2010 census was less than 3% black. What this means for Ms. Unanka is that she was much less likely to get gunned down by a black person in La Crosse than if she’d stuck around her tribespeople in 40%-black Milwaukee.

In March, the BLM activist, surrounded by adoring throngs of clueless white students, gave a speech claiming she’d been victimized by having her jaundiced eyes forced to see, and her flaring nostrils forced to sniff, two separate incidents of racist graffiti on campus. After police investigated the handwriting on the graffiti, they winnowed it down to one “person of interest” whom they curiously refused to name or arrest.

Surveillance video — which is proving to be racist against black people in, um, spades — proved that it was Ms. Unanka who started the fire.

She has now been expelled, and perhaps we will never know whether she was also the person who terrorized herself with racist graffiti, although I’d bet my house on it.

Arthur Prince Kollie is a 23-year-old black-as-coal man who was somehow lucky enough to wriggle his way up into the legendarily whitebread town of Fargo, North Dakota. A convicted felon, he is still on probation for assaulting a police officer in 2017. A man with no permanent address, he also pleaded guilty this May to possessing a firearm as a felon and discharging a firearm within city limits, but due to our racist and white-supremacist judicial system, he has been denied a free bed and three free meals a day in a North Dakota correctional facility, forcing him to roam the streets in search of young white girls to cannibalize.

At around 7:00 AM on Friday, June 3, police say that Kollie apprehended a 14-year-old white female skateboarder named Daisy “Jupiter” Paulsen and proceeded to spend the next twenty minutes beating, strangling, and stabbing her. He then allegedly fled the scene and entered a local Walmart, where he grabbed some new clothes, entered a changing booth, and left his bloody clothes behind.

Perhaps he was merely disappointed to hear that despite stabbing her 25 times, the cracker bitch may have been still breathing.

Daisy died in intensive care four days after the assault, which her father described as “random.”

If this sort of thing is happening in Fargo, this nation is already too Fargone.

It only takes one look at the sad and tortured face of 17-year-old Edward Stokes of Branchville, South Carolina to realize that this is a child who lives with the genetic memory of being forced to spend 400+ years of being around people who always wind up doing better than you.

Likewise, one only need to take a gander at the face of 34-year-old Alexander “Cody” Presley of nearby Cordova, South Carolina to realize that he is the type of Southern white man whose pregnant wife would find it extremely romantic if he were to buy her a used ATV.

Police say that last week, Presley answered an online ad and forked over $4,600 to Stokes for the ATV. After Presley loaded the vehicle on a trailer, Stokes pulled a gun on Presley, who was there with his pregnant wife and her eight-year-old son. Presley offered to give Stokes anything but begged him not to shoot. Stokes shot him dead anyway.

Now that eight-year-old white boy and his sibling-to-be will have to grow up in a world that teaches them, under threat of punishment and eternal ostracism, that there’s nothing worse in this world than hating black people.

As someone who’s had the misfortune of living in the Atlanta area for 14 years now, allow me to oversimplify it for you — the north side is white and rich, and the south side is black and feeds on the north side’s tax revenue.

Buckhead is the name of Atlanta’s wealthiest neighborhood, and is often referred to as the “Beverly Hills of the South.” It contains 20% of Atlanta’s population and boasts about 40% of its property value.

Atlanta police have arrested a black 22-year old named Gaelen Kahrlee Newsom in connection with a “drive-by shooting spree” through Buckhead on Sunday morning, June 6. A white man named Andrew Worrell had completed the first mile of a three-mile jog through Buckhead when Newsom rolled up next to him in a silver car with heavily tinted windows, rolled down a window, and fired at him three times. Worrell was injured but survived. Newsom is also suspected of two other non-fatal shootings in Buckhead that morning, but Morrell’s operation was temporarily delayed to make way for another victim of Newsom’s who was allegedly hit and pinned by his car. Deputy Atlanta Police Chief Charles Hampton Jr. said Newsom was obviously in the throes of “some type of mental health crisis.”

Worrell’s wife, who noted that many Buckhead residents are fleeing the area due to a surge in violent crime ever since black America decided that George Floyd didn’t deserve it, insisted on blaming the “system” instead of “black people.”

In response to the creeping encroachment of violent crime, a group called the Buckhead City Committee is holding emergency meetings to draw up plans to secede from Atlanta and form their own city, which is unlikely to happen without a full-throated Civil War.

How Racist Whites Use Tennis and Golf to Oppress Minorities

Despite everything I’ve enumerated so far in this week’s roundup, some people still act surprised that white people seek to segregate themselves from nonwhites. “How Tennis, Golf, and White Anxiety Block Racial Integration” is the name of a preliminary synopsis of an article due to be published in July in the Journal of Experimental Social Psychology called “Structuring Local Environments to Avoid Diversity: Anxiety Drives Whites’ Geographical and Institutional Self-Segregation Preferences.” The upcoming paper’s author is Jon Jachimowicz, and a quick search of that surname’s origin suggests, um, a Polish derivation.

As far as I can discern, the study observes that the owners of white golf and tennis clubs charge exorbitant fees to prevent black people from coming in and stabbing them to death for 20 minutes or shooting them in front of their wives and children, although I’m reasonably certain that the “research” doesn’t broach the whole shooting-and-stabbing angle.

And that’s it for this week. As the days grow hotter and longer, expect more blood in the streets.