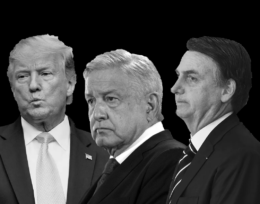 I remember the early autumn of 2016, just before Donald Trump was elected President of America. I was sitting on the terrace of a very trendy bar with a very good friend, and we were on our 6th or 7th glass of rum. It was one of those blessed Mediterranean nights where the scorching heat of the day had receded and the moisture of the air was slowly cooling, and the smells of the lush vegetation and nearby river were soothing the senses even as scantily clad, shapely women milled around us. I declared, with a dose of triumphant confidence, that not only would Donald Trump be elected president, but also that nutcase in Brazil (Jair Bolsonaro), the blonde in France (Marine le Pen), and even Don Matteo in Italy would win their elections, and the anti-globohomo coalition would grow to include not only America, but also Brazil, France, and Italy.

Now, a few glasses of rum later, my friend voiced skepticism, not of our imminent victory (which was beyond doubt), but of the possibility of converting that victory into lasting success, especially in America. I agreed with him, as we both were savvy to the idea that America is not really ruled from the Oval Office, but I offered to him the counterexample of Hungary. Hungary already had a national populist — Viktor Orbán — in power.

Now, what made Orbán interesting to us especially was the fact that our country of Macedonia was undergoing a color revolution in the 2015-2017 period, and we noticed that the color revolutionaries were relying on the type of infrastructure that Orbán had previously eradicated in Hungary. Hence, our erstwhile prime minister found himself easy pickings for globohomo, whereas Viktor Orbán shrugged off all attempts to oust him by means of a color revolution. The recipe for success as a national populist leader was clear: if by any chance you take power, you must crack down on so-called “civil society,” NGOs, women’s advocacy groups, minority interest groups, LGBT organizations, press freedom advocates, transparency advocates, “independent” media organizations, or in other words, the infrastructure necessary for color revolution. A good rule of thumb: if they take money from Soros’ Open Society Foundation, the National Endowment for Democracy, USAID, or any of the other globohomo financing schemes, they have to go. Similar success in crackdowns was also seen in Russia, where Vladimir Putin secured his position by the same means.

We agreed, over even more rum, that Donald Trump would probably not be able to root out the evil within America, as the American state and related organizations are the oldest and strongest nodes of globohomo, but we had high hopes for the other national populists. Specifically, I contended that in the worst-case scenario of Orbán being overthrown in Hungary that very day, it’d still take globohomo between 10 and 20 years to rebuild the infrastructure he destroyed. We imagined that national populist victories in Brazil, France, and Italy would result in similar crackdowns on globohomo infrastructure which would take out these much bigger and more important nodes of globohomo (no offense to Hungarians intended, obviously). This is important to note; the American nodes may be the oldest and strongest nodes of globohomo, but they’re not central; globohomo is very well-distributed. Even if all the shitlibs in America were to suddenly cease existing, whisked away as if by magic, or by a nuke dropping on Washington DC, there’d still be armies of EUrocrats, CCP apparatchiks, Latin American girlbosses, clannish, arrogant Brahmin, and dancing Israelis ready to staff globohomo. That’s the magic of a well-networked, distributed system. But as such, it is prone to cascading failure.

Cascading failure occurs in interconnected systems when nodes of the system fail and then other nodes have to take over their responsibilities, thereby pushing themselves to their own limits, prompting failure, which forces other nodes to take over their responsibilities, and so on. It stands to reason that taking out the French and Italian nodes of globohomo would additionally burden the local European network, which is already taking up the slack of the failed Hungarian and embattled Polish node, leading to a cascading failure of the European network, which would put an additional burden on the global networks, especially if the Brazilian node is taken out while the American node is embattled. I estimated, somewhat optimistically, that we needn’t win in all countries — just enough countries to overtax the already overstretched globohomo. Thus, if the EUrocrats are trying to put out the Franco-Italo-Hungarian national populist blaze in Europe, they cannot come to the help of their American friends as they’re struggling against Orange Hitler, and nobody can help the poor civil society organizers of Brazil bring even more drugs and crime into the favelas as Tropical Hitler is cracking down on them.

It was a nice dream for the day. My friend and I were also well and truly sloshed, so there was no way it could go wrong. The logic going, if two lazy, drunk, minor-league intellectuals could see the path to victory, surely Trump, Bolsonaro, Salvini, and Le Pen, or at least whatever smart people they had around them, could. Truly, a blessed time. But why am I bringing it up now?

The reason is that I recently read an expose — or more accurately, a kvetchspose — about how Andrés Manuel López Obrador, the president of Mexico, is apparently making noises inimical to the presence of civil society organizations in Mexico, accusing them of undermining Mexican sovereignty. From the article:

López Obrador has recently taken to railing against foreign sources of funding for civil society organizations, claiming Mexico’s sovereignty is at risk. The president’s long-running accusations that various foreign agencies are attempting to undermine his government culminated in a diplomatic note sent in May to the U.S. Embassy in Mexico. Speaking at a press conference, López Obrador blamed the U.S. government for “an act of interventionism that violates our sovereignty.”

The alleged “act of interventionism” is USAID’s provision of funds to the nonprofit organization Mexicans Against Corruption and Impunity (MCCI). In 2018, MCCI received a three-year grant of $2.3 million through the agency’s designated funds to support anti-corruption activities in Mexico. López Obrador also criticized Article 19, a nongovernmental organization that defends freedom of expression and whose work had been cited by the U.S. State Department in its annual human rights report.

I see here what Orbán did in Hungary, what Salvini and Bolsonaro should have done in Italy and Brazil, and what Trump should have at least attempted to do in America: dismantling the infrastructure necessary for color revolution. AMLO must take these steps, lest he find himself on the receiving end of one and his attempt to reassert Mexican sovereignty foiled.

AMLO is more or less a national populist. According to the article itself, “López Obrador wants to continue reducing government spending, ramping up fossil fuel use, and expanding the role of the armed forces.” He has also apparently created difficulties for American energy companies by practicing a form of economic nationalism in the energy sector. Sounds fun. But during AMLO’s rise to power, the cuckservative media complex worked overtime to paint him as a “soshulist,” thus preventing any cooperation and cross-pollination between the American and Mexican national populist movements. For a time being, the three largest and most powerful countries on the American continents — the USA, Mexico, and Brazil — were headed by the national populists Donald Trump, Andrés Manuel López Obrador, and Jair Bolsonaro. Just think, we could have brought The Three Caballeros back at the presidential level!

We are seeing now in the AMLO regime a will to survive that we did not detect in the Trump administration, in the Salvini ministry, or even in Bolsonaro’s reign of cargo-cult neoconservatism and general incoherence. This should be a lesson for nationalists and national populists if we manage to get into power in the future: that power must be used and the enemy’s infrastructure must be destroyed, while our own infrastructure must be expanded and fortified against future attack. Unfortunately, the mental poison of bourgeois conservatism seeped into the nationalist and national populist discourse and convinced an alarming amount of influential people that power can be retained by means of argumentation. That might be helpful, but if we’re ever in a position of power, the prime method of power retention should be a rollback of enemy infrastructure and construction and fortification of our own. As it is often said, a lie can get around the world twice before the truth can put its pants on. If nationalists and national populists are to seize and retain power, we must destroy those institutions which give our enemies the power to forge and promulgate their lies.

Or, to put it succinctly, we will not Ben Shapiro our way to victory.