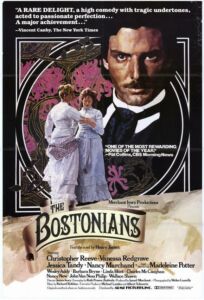 Not every Merchant-Ivory film is a visually lush period drama based on novels by prestigious writers like E. M. Forster and Henry James, but the most memorable ones are, including The Europeans (1979), The Bostonians (1984), A Room with a View (1985), Maurice (1987), and Howards End (1992). Another in this vein is The Remains of the Day (1993), based on a novel by Kazuo Ishiguro.

All these films were produced by Ismail Merchant, an Indian Muslim, and directed by his gay partner James Ivory, an American Protestant. With the exception of Maurice, they were adapted for the screen by Ruth Prawer Jhabvala, a German Jew married to an Indian Parsi.

Yet for all the intersectional diversity points of their creators, there is something “problematic” about these films, for they feed on a deep nostalgia for the nineteenth and early twentieth centuries, characterized by overwhelming whiteness, patriarchy, sexual repression, and heteronormativity. Of course, all the characters struggle against this world in the name of an old-fashioned, white, and Eurocentric liberalism that is also problematic these days. But it is impossible to overlook that the world they are struggling against is far more attractive than the world they ended up making for us.

In the case of The Bostonians, however, they don’t have to, for through some strange twist of fate, this is one of the most anti-liberal, anti-feminist movies I have ever seen. Starring Vanessa Redgrave, Christopher Reeve, Madeleine Potter, Jessica Tandy, and Linda Hunt, The Bostonians is based on Henry James’ 1886 novel of the same name, which is a satire of the Eastern liberal establishment circa 1875–76 set primarily in Boston but with forays to Cambridge, New York City, and Martha’s Vineyard — pretty much their same haunts today. 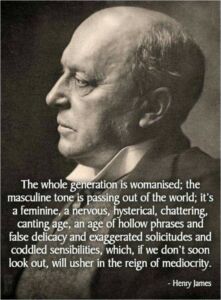 [3]It is a world of bossy women and low-testosterone men. All the characters are either rich or the professionals, courtiers, and charlatans who feed off the rich. Mesmerism, spiritualism, homeopathy, and feminism are the current rages in their salons.

The Bostonians focuses on a circle of wealthy suffragettes. Now that blacks have been emancipated and the South put to the sword, feminism is the next great progressive crusade. The main suffragettes are the elderly Miss Birdseye (Jessica Tandy), a gentle soul who lives in a world of high-minded fancies; Mrs. Burrage (Nancy Marchand), a fabulously rich New Yorker with a son at Harvard who hosts radical salons at her Fifth Avenue mansion; and the fifty-something spinster Olive Chancellor, a lesbian and wild-eyed fanatic who is beautifully played by Vanessa Redgrave.

The dramatic conflict of The Bostonians is between Olive and her distant cousin, Basil Ransom (Christopher Reeve), a Confederate veteran from Mississippi who now works as a lawyer in New York City. Basil is a writer on topics like honor, virtue, and aristocracy. He is unapologetically conservative, even reactionary. When one of his essays was rejected for being “300 hundred years out of date,” he replied: “On the rights of minorities, I am 300 years out of date. But you see, I haven’t come too late. I have come too soon.” A man after my own heart.

You can buy Trevor Lynch’s Part Four of the Trilogy here. [5]

Basil also rejects feminism. He thinks that “for public uses” women are entirely “inferior and second rate.” Instead, he thinks that women are best suited for the private realm of family life. He also mocks the feminist complaint that women are oppressed. Basil thinks women have enormous power as it is, and their desire for equal footing in public would in fact lead to the oppression of men by women. Which raises a question: If men could see this in the 1880s, how did we end up where we are today?

Basil does have one ally, Dr. Prance, warmly portrayed by the diminutive, husky-voiced Linda Hunt. Dr. Prance takes care of the wealthy valetudinarian Miss Birdseye, along with a Mesmerist, a homeopath (“It is now recognized as the true system,” chirps Miss Birdseye), and who knows what else. Even though Dr. Prance is a female professional, she rejects feminism and women’s suffrage. But, as she tells Basil, the suffragists are completely uninterested in her opinion. They think it is far more significant if a man agrees with them.

Olive and Basil’s main conflict is not, however, over political philosophy. Instead, they are fighting over a woman: Verena Tarrant (Madeleine Potter). Verena is the daughter of “Dr.” Tarrant, a spiritualist and Mesmeric healer who never gets too transported to forget to present his bill. Both Basil and Olive meet Verena at a suffragist meeting where she is trotted out by her father and “started up” with some parlor magic to deliver an impassioned oration for women’s equality. It is love at first sight for both cousins.

Olive wants to groom Verena, both as a feminist speaker and a lover. She basically buys Verena from her parents, handing her father a check for $5,000 for the privilege of overseeing her “education” for a year, after which he can expect the same amount again. In 1875, that was the equivalent of $120,000 today, in a time when the cost of living was far lower. Today, parents hand over that much to universities for the privilege of having their children seduced and ruined, ideologically and otherwise.

Verena’s education consists of readings, museum outings, and Olive’s wild-eyed orations about dedication and sacrifice for the liberation of humanity — in the lap of embarrassing luxury, to the fey strains of the Wagner’s Lohengrin Prelude. Redgrave was really born for this role.

Basil tells Verena “I don’t think you mean what you preach.” Instead, he thinks that she simply has a “sweet nature” that makes her want to please the people around her: her father, Olive, Miss Birdseye, etc. In short, Verena is exactly the kind of woman he wants for his wife: someone who will be devoted to pleasing him, which of course implies motherhood and child-rearing as well.

But can’t Verena “have it all”? No. Basil doesn’t want a wife who is famous for preaching dangerous nonsense. He wants her to give up politics altogether and devote herself entirely to private life. He asks, “Can’t I make you see how much more natural it is — not to say agreeable — to give yourself to a man, instead of to the movement of some morbid old maid?” Basil is also shrewd enough to know what Olive is after. They didn’t call lesbian cohabitation “Boston marriages” for nothing, which adds a new shade of meaning to the title.

I’ll leave you to discover the twists and turns of Olive and Basil’s struggle over Verena for yourselves. But I should at least tell you that this movie does not follow the model of politically incorrect heroes (Archie Bunker, Tony Soprano) who “grow” over time. The Bostonians wouldn’t be remarkable unless our chivalrous Confederate hero won out in the end, without compromise, his character and principles entirely intact.

Henry James was known for extremely subtle studies of character and psychology. The movie does them justice. The tiniest gestures are revealing and often quite funny. For instance, during one of Dr. Tarrant’s mesmeric healing sessions, he breaks out of his prophetic voice twice to ask an unctuous weasel of a reporter (Wallace Shawn), “Have you got that, Mr. Pardon?” Another great moment is when Mrs. Burrage assures Olive that she is devoted to the cause of “we poor women” as they are served tea in her sumptuous Fifth Avenue mansion. (Aside from Basil and Dr. Prance, the characters spend quite a bit of time assuring one another of their good intentions.)

Olive and Basil are polar opposites in character as well as in sex and politics.

Basil is unfailingly polite and kind, despite his inegalitarian convictions. But he is always firm and frank about who he is and what he wants. He is not threatened by people who disagree with him, perhaps because he doesn’t suffer from the grandiose delusion that his beliefs are ordained by the God of the Bible or the God of Progress, such that disagreement is equivalent to damnation. This is Christopher Reeve’s best role. He is completely natural and credible. In everything else I have seen him in, he comes off as smug and precious, like an overpraised child.

Olive is rude and supercilious, despite her professed humanitarianism. She is dogmatic about her political views: “He’s an enemy!” she whispers about Basil with the same trembling fanaticism that her Puritan ancestors said, “She’s a witch!” Olive is on the side of the angels, so woe to us.

But Olive refuses to take a stand on what she wants in her relationship with Verena. Verena wants to please Olive, but Olive always throws it back to Verena, “I want you to do it because you want it.” Note that she doesn’t want Verena to do what Olive wants, despite what Verena wants. She wants Verena to want what Olive wants — and without the necessity of Olive telling her.

There’s a strange sort of narcissism here. Olive is stetting herself up as a sort of idol or oracle and demanding that her worshipper orbit her perpetually, trying to guess what would please her. It is utterly maddening. No wonder there’s so much violence in lesbian relationships. Of course, there’s a real possibility that Olive doesn’t consciously know she’s a lesbian. She may be the last to know.

The Eastern liberal establishment of The Bostonians is pretty much recognizable as today’s hostile elite, using their money and connections to launch destructive ideologies into the world, confident that their wealth and power will insulate them from any blowback. But this is an indigenous white Protestant hostile elite, not the Jewish-dominated one that arose in the twentieth century. There is, however, a hint of what is to come. At Mrs. Burrage’s salon, we learn that a Professor Gougenheim will soon deliver a lecture on the Talmud.

James’ novel received savage reviews from the Eastern liberal establishment it lampoons. Which makes me wonder how this movie garnered positive reviews and award nominations. It is a miracle that it was ever made. It is hard to believe that Jhabvala and Ivory didn’t see the humor and the horror in their depictions of characters like Olive, Miss Birdseye, Mrs. Burrage, and Dr. Tarrant. But if they did, would they have dared to make the movie at all?

It is also impossible to believe that they sympathized with the character and philosophy of Basil Ransom, yet here he is on the big screen, both admirable and undefeated. I’d like to think that this is a rare example of liberals being genuinely broadminded about their opponents and critical of themselves. But sometimes dissident ideas leak into the mainstream simply because our opponents are so smug that they can’t imagine anyone actually taking them seriously.

I highly recommend The Bostonians. It is a nostalgic, escapist feast for the eyes that won’t insult your intellect or your values.