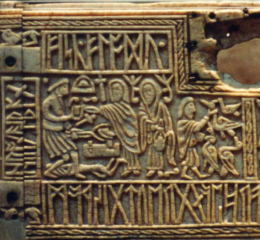 If you want a mouthful of history, just say “mouthful of history.” It’s a hybrid phrase, Germanic and Greek, combining two great European traditions that met and mingled on the island of Britain. But there’s a local flavor to it too: the second consonant of “mouthful” is distinctively English. That’s why we once had a good way to write that second consonant: in Old English, “mouth” was muð, pronounced “mooth.”

Then came the Norman Conquest and the Great Vowel Shift [2]. Our language changed, as languages always do, but white nationalists won’t need telling that change isn’t always for the better. We would be better off if English had retained its two distinct single letters — Þ and ð — for what are called the dental fricatives: the “th” of “thing” and “then.” They’re single sounds, after all, and they’re important sounds. However, the sounds don’t occur in French and the letters were lost when Norman scribes imposed an alien orthography on a conquered people.

How many native speakers of English know that? Not many, because not many know anything about Old English. That’s wrong, because it means we’re cut off from the roots of our own language. I felt that rootlessness myself when I looked at Old English for the first time. I learned I’d been wandering all my previous life in a linguistic landscape — a tongue-scape — whose features I didn’t understand and couldn’t explain. For example, why do some English words undergo such strange transformations? There’s “write, wrote, written” and “sing, sang, sung.” There’s “tooth, teeth” and “mouse, mice.” If you look at Old English, you’ll understand why those things happen.

You’ll also learn what richness we’ve lost. We’ve lost those beautiful old letters Þ and ð (called “thorn” and “eth”); [1] [3] and that curious little letter æ (called “ash”) for the distinctive English vowel of “man” and “hat.” And we’ve lost thousands of rich and beautiful words, both simple and complex: simple words like æÞele, meaning “noble,” and wuldor, meaning “glory”; and complex words like æÞelborennes, “nobility of birth,” and wuldorgesteald, “glorious dwellings.” And something changes inside your head when you meet an Old English word like tungolcræft for the first time. It means “astronomy,” but it isn’t dry and otherish like that word from far-off Greek. Tungolcræft is literally “star-craft” (tungol, “star,” is another lost word).

That’s how English once worked: we didn’t import words from Latin and Greek to express the concepts of scholarship and science. We built words on the spot from home-grown wood, as it were. Here are two more examples: stæfcræft, stave-craft, was “grammar,” and efenðrôwung, equal-suffering, was “compassion.” Unless you know some Greek and Latin, “grammar” and “compassion” are opaque words. Too many of us know what they mean, but don’t know why. And even when you know that compassion is Latin for “with-suffering,” words like that don’t speak to your blood.

Efenðrōwung does speak to your blood. And compare the Old English blōstmfrēols, “blossom-freedom,” with the Latinate “floral festival.” Indeed, compare the Old English wiðmetan, “measure against,” with the Latinate “compare.” We didn’t need to import so much Latin, Greek and French. We gained something, but we may have lost even more. The process deracinated our language — unrooted our tongue.

German didn’t unroot itself like that. The standard German word for compassion is Mitleid, “with-suffering.” And where English imports Greek sympathy, German has home-built Mitgefühl, “with-feeling.” What is opaque in English is transparent in German, where much greater use of native elements in the vocabulary of philosophy and science may have profound psychological effects. German has shown much more resistance to what you could call linguistic globalization. And even when our sister-tongue has succumbed to globalization, it often kicks against the prick. German uses Latin Globus, meaning “globe,” but also Erdball, meaning “earth-ball.” Reading Collin Cleary’s fascinating essays on Heidegger [4] at Counter-Currents, I’ve wondered how important the German language was for enabling Heidegger’s ideas and informing his resistance to modernity. Could Heidegger, Wagner, and other German-speaking giants have been gigantic in the same way if they’d been native speakers of English?

I don’t think so. And one very good reason for learning Old English is that, in some ways, it’s the best way for a native speaker of English to approach German. So much of what you’ll find in Old English is still there in German, like the three grammatical genders and greater use of inflection to mark grammatical cases like the accusative and dative. German isn’t as alien as it might appear. In fact, in some ways, it’s truer to the spirit of English than English is. We can find there so much of what we’ve lost here.

But one thing we haven’t lost here, I’m glad to say, are the sounds, at least, of the dental fricatives: the Þ (called “thorn”) and ð (called “eth”) of “thing” and “then.” I’d call them earthy sounds: they root us in history and in a unique folk-way in Europe. We might now write them in a clumsy, Frenchified way (t + h), but we still say them as our forebears did so many centuries ago. And as the speakers of another sister-tongue still do. Oddly enough, although it’s spoken right next door to England, it’s much further from English than German is. Then again, it’s a very odd language from an English speaker’s point of view, and learning it might be the biggest linguistic adventure of your life.

What is it? It’s Welsh, which uses dental fricatives in words like cath, “cat,” and blwyddyn, “year.” It also has a lateral fricative, the hissing double-l of llefrith, “milk,” and llwyd, “gray.” And a voiceless trill, the sighing rh of rhosyn, “rose,” and rhaw, “spade.”

And with strange sounds goes strange grammar. Tad is Welsh for “father” and brawd is Welsh for “brother.” They sound a lot like English, don’t they? But “my father” in Welsh is fy nhad and “your brother” is dy frawd (with f pronounced as v). That’s a small sample of what’s called mutation, where the initial consonants of Welsh words transform or even disappear entirely in certain grammatical contexts. Welsh is weird. But also beautiful. It’s a great pity that Plaid Cymru, the Leftist Welsh party that promotes Welsh in its very name (“Party of Wales”), would be as bad for Wales as, in the rest of Britain, the Labour party has been for the white working-class. Plaid Cymru would happily flood Wales with Somalis, Pakistanis, and Nigerians. That would be disastrous for the Welsh language and Welsh culture. But therein is a sure sign of Leftism: it harms most where it claims to care most.

Fortunately, you can learn Welsh without accepting the Leftism of far too many of its modern enthusiasts. After all, if you learn Welsh, you’ll be following in the linguistic footsteps of one of the greatest of traditionalist heroes: J. R. R. Tolkien (1892-1873). His passion for languages like Welsh, Old English, and Finnish inspired world-spinning, and world-spanning, works like The Lord of the Rings (1954-5) and The Silmarillion (1977). Among much else, he was trying to give England a mythology to match those of the Celts and the Teutons. One good reason to learn Welsh — and another good reason to learn Old English — is that it will give you deeper insights into Tolkien’s writing, ideas, and aims. His invented language Elvish, with words like Caras Galadhon, “City of the Trees,” and Rhosgobel, “Brown Village,” is an homage to Welsh. And why are the walking-and-talking trees in The Lord of the Rings called “ents”? Because ent was the Old English for “giant.”

But there had been earlier attempts to re-connect modern English with its ancient roots. The linguistic and cultural movement called Saxonism [7] tried to popularize words like folkwain for “bus” and farspeaker for “telephone” (compare Fernsprecher, the standard German word for “telephone”). Saxonism failed, but it could be tried again. And it could, under Tolkien’s inspiration, go even further. If English should find home-grown ways to say “compassion” and “telephone,” why shouldn’t it find a home-grown way to write them? Tolkien invented new scripts for his new languages: if speech is flesh, then writing is clothing. But English isn’t now clad in its own garments: it wears hand-me-downs tattered by millennia of use. “Mouthful of history” is an eyeful of history when it’s written down. And in some ways, it’s an ugly eyeful. I don’t find the standard Roman alphabet attractive. And it’s phonetically impoverished for English, with too few symbols for our treasury of sounds. This isn’t surprising, because our alphabet isn’t truly ours: it uses letters originally devised for Semitic languages, then filtered through Greek, Etruscan, and Latin.

And the Roman alphabet is a globalizing force: it unites almost all the languages of Europe, but it also drains something from each of them. How wonderful it would be if each European language had its own unique script, tailored precisely to its phonetics, grammar, and what German calls its Sprachgeist, or “language-spirit.” Tolkien showed the way with his Elvish script and dwarf-runes. But I wouldn’t want to see English re-adopt the ancient Runic script that inspired Tolkien’s dwarf-runes. For one thing, runes are often ugly and angular. They have their charms and could have their uses in a white nationalist society. But I think it would be better to use Tolkien’s Elvish script. And better still to create entirely new alphabets for English and Welsh and the other languages of Europe. Beautiful alphabets, to inspire those who speak them and help them better resist the forces of globalism and homogeneity.

Alphabets too must have profound psychological effects on those who use them. And we could do much better than the alphabet English currently uses, both for our own brains and for the sum of beauty in the world. But thorough alphabetic reform is something for the future — perhaps the far future. In the meantime, white nationalists should remember that words are weapons. And you sharpen your word-weapons by knowing more about words and language. The great German writer Goethe once said this [9]: Wer fremde Sprachen nicht kennt, weiß nichts von seiner eigenen — “Those who know nothing of foreign languages know nothing of their own.” That’s true, but it also applies to earlier forms of your own language.

If English is your mother tongue, it’s a very good idea to learn something about Old English and the Middle English of Chaucer’s teeming and tumultuous Canterbury Tales (14th century). But if your forebears weren’t speaking English a few generations back, it’s also a good idea to learn something about whatever language or languages they were: German or Gaelic or Polish or French or Spanish or Greek. The relationships between language and genetics are still disputed, but one thing remains sure: you anchor yourself more firmly in history by learning about your fore-tongues — your ancestral languages. Your roots go deeper and your mind becomes stronger.

It will take more than words to defeat the Left and the hostile elite [10], but words are midmost to earth-kinnish wist — central to human existence. English and every other language become ugly and unrooted in the mouths of the Left. In answer, we can do what Tolkien did: re-root and enrich our tongue-lorish moodseve [11] — our linguistic imagination.

[1] [12] “Eth,” the name of ð, is pronounced with the “th” of “then.” It’s ridiculous that there’s no widely known way to distinguish between the two “th” sounds in modern English (Tolkien used “dh” for ð and “th” for þ). And how can we unambiguously write the vowel in “good,” “could” and “sugar”? We can’t.