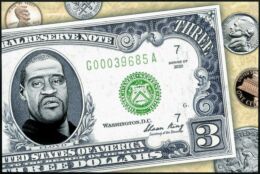 When I commented recently that I found the word “Juneteenth” to be Junetarded, somebody one-upped me by suggesting that soon, the US will officially change Halloween’s name to “Octoroonth.”

Yes, the nation has truly become that dumb.

As the story goes, the black slaves of Galveston, Texas were so extremely offline that it took two-and-a-half years for them to hear of the Emancipation Proclamation and more than two months to catch wind of the fact that the South had already surrendered, meaning that 156 years later, their descendants would be celebrating the end of slavery by shooting one another to death in public parks and blocking EMT trucks from delivering emergency service to their dusky kinsmen by force-twerking [2] the vehicles to a standstill.

Last Thursday, Joe Biden emerged from his coffin to sign a bill that made Juneteenth our twelfth federal holiday, the first new such designation since 1983, when serial orgy-holder and white-prostitute-beater Martin Luther King became the only other American besides George Washington to have his own National Special Day.

“By making Juneteenth a federal holiday, all Americans can feel the power of this day and learn from our history, and celebrate progress, and grapple with the distance we’ve come but the distance we have to travel to,” said Biden’s handlers through the special audio device they’d implanted in his mouth.

It’s a safe bet that the eight or more [3] people who were shot dead last Saturday and the three dozen or so who were wounded by gunfire in the midst of this giddily idiotic national celebration of “progress” were intimately able to “feel the power” of this day.

In case you were keeping count and believe that black lives matter, that’s eight George Floyds. But the only Juneteenth-related headline I could find that contained the word “outrage [4]” was related to dozens of black Ikea employees calling in sick from work because the store’s Juneteenth celebration involved free fried chicken and watermelon.

Juneteenth is yet another ideological baseball bat they use to club you over the head with the specter of slavery as an endless sermon against white evil and an eternal alibi for black failure, about how we live in “a country which built its wealth and monuments [7] on the backs of forced Black [sic] labor” and how slavery “continues to benefit some while burdening others.”

This tiresome finger-wagging never attempts to explain that if all you need to build wealth is black labor, why have black countries never built wealth with black labor? It seems like there’s some mystery missing ingredient in the recipe there, no? And if this country’s wealth and power were built solely with black labor, how the fuck did the North manage to win that war? And if black Americans continue to be “burdened” by the legacy of slavery, why do migration patterns among blacks persist in being almost entirely a one-way plane ride from Africa to here rather than the inverse?

I learned a few things about Juneteenth this year, but probably not the type of things you’re allowed to mention in polite company. I was already aware that the Emancipation Proclamation only freed slaves in the South — a wily trick by Abe Lincoln — but this year I learned that there were still black slaves in the Union borders states of Kentucky and Delaware all the way to December, 1865 — six months after the slaves were freed in Texas, meaning that if you’re going to have an ill-advised holiday celebrating the final emancipation of black American slaves, better to call it “Kenteenth” or “Delteenth.” Beyond that, American Choctaw Indians held black slaves into 1866, meaning the proper name for the holiday should be “Chocteenth” and that the Injuns should bear at least a smidgen of the never-ending guilt burden.

It was in the obnoxiously black town of Oakland, California [8] that a giant mob of retardedly gleeful twerkers prevented an EMT truck from delivering care to the seven people who were injured by gunfire. It’s unclear whether or not the one person who died in that barrage was already dead by the time the truck arrived.

In Raleigh, North Carolina [9], a paramedic was shot and wounded while responding to another Juneteenth Junetacular.

In two separate shooting incidents in Philly [10] last Saturday, two men were killed and four others, including a three-year-old boy, were wounded as the descendants of slaves celebrated their newfound ability to live up to their full glorious potential.

In Baton Rouge, Louisiana [11] — which has already well eclipsed its total murder tally for last year, and this year isn’t even half over yet — “numerous people opened fire after a dispute broke out between bar patrons” as Juneteenth revelers got a little Junetipsy. According to a Baton Rouge police sergeant named L’Jean McNeely, Kyren Walton and Ladarius Alexander did not survive the gunfire, while four others with what I will presume are equivalently laughable names were merely wounded.

During an overnight “Juneteenth Summer Bash” in Granger, Indiana [12], 26-year-old Victor Anthwan Kyle, Jr. — who received his name because his parents thought that one Victor Anthwan Kyle wasn’t enough — was shot to death, while four others suffered gun-related injuries.

In a “possibly gang-related” shootout that was “related to a Juneteenth celebration” in an Aurora, Colorado [13] strip mall parking lot, one person was killed and four others injured. Police say they collected at least 114 shell casings in the aftermath.

In Clover, South Carolina [14], a road-rage incident led to a black couple and their two children being shot at “during a late-night Juneteenth celebration,” but no one was injured. Regardless of the sounds of gunfire, raucous descendants of slaves kept-a-partyin’ and actin’ a fool for another 35 minutes, at which point more shots rang out, injuring three and leaving shell casings strewn for at least 300 feet.

In Flint, Michigan [15], where lead poisons the water and melanin runs wild in the streets, a 19-year-old black girl named Briana Sykes was shot dead after she drove up to a cop “who was controlling traffic near a weekend Juneteenth parade” and fired at him.

And last year in Charlotte, North Carolina [16], four people — including victims named Jamaa and Dairyon — were shot dead and 10 others injured “at a Juneteenth celebration.”

And July 4th is right around the corner.

At this juncture, chances are slim that a sitting US President will ever declare an Independence From Black People Day.