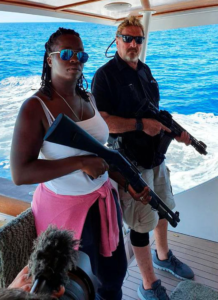 In case you haven’t heard the news, John McAfee has reportedly committed suicide in his cell in a Barcelona jail on June 23, 2021. He had been imprisoned there since October of 2020. His imprisonment sadly prevented him from fulfilling his pledge to “eat his own dick” if Bitcoin didn’t hit $1 million before the end of 2020. He had claimed repeatedly on Twitter that he was happy and wasn’t entertaining thoughts of killing himself. And nobody believes he killed himself.

A lot of people think McAfee was awesome for snorting bath salts, banging hookers, marrying a black hooker, and living in international waters in order to evade capture by the American government. A minority believes he was an obscene degenerate for the very same reasons. I’ve seen memes calling him the ultimate boomer: make a shit ton of money on vaporware, live in a tropical location, marry a nonwhite hooker, do drugs, have no children (despite the claim of having 47 illegitimate children), and kick off a conspiracy theory with his dying breath. I’ll let you draw your own conclusions about what he was. Personally, I had no strong opinion of the guy one way or the other. I caught his 2016 run for the Libertarian Party presidential nomination, just as I was evolving out of libertarianism and I considered him a wacky distraction from the main event of that season. He moved in and out of my view since then, pledging to eat his dick if Bitcoin didn’t reach $1 million by the end of 2020, failing to eat his dick when Bitcoin didn’t reach $1 million at the end of 2020, giving some good tips about cybersecurity, talking about shoving his arm up women’s asses (I’m not linking to that, do your own damn research), and generally providing a mixture of entertaining, useful, and downright disgusting stories.

Now, on to the main issue. Did John McAfee kill himself? That’s a good question, but sadly, I cannot give you an answer. On the one hand, John McAfee was an insane drug user who’d suddenly been thrown in prison after a lifetime of indulgence. On the other hand, he did say he had no intention of killing himself and seemed to activate some sort of deadhand post on Instagram, which was an image of the letter Q. Oh, I think you can see where this is going. Some people have drawn parallels to the case of Jeffrey Epstein. There’s supposed to be some super-secret info contained in that Instagram post that people more technical than me are unraveling as we speak, and we’ll see what data it unveils, but allow me, if you will, to use this moment to delve into the nature of the conspiracy theory as understood in American (and therefore global) culture in the past 70 years.

The standard notion of the conspiracy theory is that there’s a conspiracy, usually at a high or possibly at the highest levels of government, to commit, facilitate, or cover up malfeasance of some sort. The ur-example, and the one that probably spawned the conspiracy theory as a cultural trope, is the assassination of John F. Kennedy. Just as Jeffrey Epstein didn’t kill himself, so was JFK not shot by a lone gunman, and only with knowledge of the government could the true nature of the JFK assassination be hidden from the public. So, the assumption is that the government, or more often, actors within the government, are skulking around in the dark, destroying evidence, intimidating, bribing or liquidating witnesses, running disinformation campaigns, setting up patsies to inevitably fail in their investigations, everything to keep the truth hidden from the general public.

Now, I’m pretty sure that malicious actors in government have been up to no end of shady business they mean to keep concealed from the public, but baked into this now-standard conspiracy narrative is the notion that if the facts of the conspiracy were to ever reach the public, there’d be a great uproar, and the bad guys would be caught, tried, if not by the public, then at least by good guys in the government who are themselves being duped, intimidated, etc. And so, the conspiracy theorist will look for evidence, which evidence he will present to the public, to the authorities, to anyone, so that action might be taken against the conspirators. When one goes down the conspiracy rabbit hole, one expects it to have a definite end.

Now given that we’re all inheritors of the culture of the past 70 years, many of our own woes have been interpreted through this framework of government spooks skulking around, working in the shadows to effectuate the things we don’t like. Racial replacement of white people? Legalization of crime for nonwhites? The Great Reset? Green New Deal? It’s all shadowy g-men and Deep State operatives who’ve somehow infiltrated the institutions of power and are projecting their terrible will from behind the shadows. But allow me to present an alternative hypothesis on just how malfeasance is achieved.

What if government malfeasance doesn’t rely on covering up, distorting, or presenting false facts to the public, or at least doesn’t solely rely on such distortions, but rather, relies on distorting the processes by which people think so that no skullduggery would be necessary to conceal malfeasance? Malfeasance would simply be done in the open and the people could be conditioned to ignore it, or even love it. All of the malfeasance that has caused the problems facing us as people in the modern world have been performed in the open. The 1965 immigration act? Completely open. BLM, civil rights, and critical race theory? Completely open. Carbon emissions legislation and propaganda? Completely open. No shadowy figures, no wheeling and dealing, just respectable politicians, civil servants, journalists, scientists going about the business of abolishing white people in the light of the midday sun while white people look on and cheer them on, because they’ve been shorn of the tools necessary to detect such malfeasance. Our problem as Dissident Rightists isn’t that we lack the data to prove that white people are racially replaced, or that races commit crimes at different rates, or even that there’s a concerted push to legalize crime for nonwhites — even the least erudite man can rattle out these facts. Our problem is that other people, whom we sometimes derisively call normies, lack the intellectual framework with which to process these facts as if there has been an inhibitor chip inserted into their heads to stop bad thoughts. Or maybe they were born with this chip and our enemy has merely input the current definitions of bad thoughts.

And what if there is secret malfeasance and it is uncovered? Yeah, sure, Epstein didn’t kill himself. Nobody in their right mind believes that Epstein killed himself. The people know. What of it? They’ve conveniently blocked out the part where he was gathering and cultivating kompromat on behalf of the Mossad. But even if they haven’t, what tangible political gain has been made of this monumental drop in public trust? Is there even a path towards political gain from the public knowledge that Epstein didn’t kill himself? The fact of the matter is that the drop in public trust doesn’t bother the enemy, so long as the public doesn’t trust anyone else either, which lack of trust they can ensure by unleashing infiltrators and controlled opposition which will serve to discredit all genuine opposition. And even then, the enemy completely controls the governments of the west and even more importantly, the framework people use to think. Even people who imagine themselves to be opponents of the current regime are playing out its worn-out scenarios and functioning within its permitted oppositional roles. So, in light of all that, does it matter whether John McAfee killed himself?

It’s probably going to be a good conversation starter in the next month or so. You can probably use talk of McAfee’s purported suicide as a first measure of how “with it” someone is, as a safe overture before turning the conversation to more controversial subjects. But as for the act itself, or any super-secret data the man himself might have uncovered, whether his suicide is related to the building collapse in Florida or other happenings? At this point, our enemy doesn’t even need to conceal their outright crimes, let alone their shenanigans and malfeasances. They set the narrative and it doesn’t matter that you disagree with it — it is the official truth and you lack the conceptual tools to even begin doubting it, but if you do, you’ll be cast into the outer darkness, where the racists live.

The silver lining, of course, is that over here in the land of the racists, we are working on developing just the kind of conceptual framework you need to think in ways the enemy dislikes.