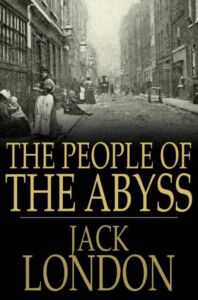 Jack London
The People of the Abyss
New York: Macmillan, 1903

Some phrases stay with you for life, and one such for me has been attributed to Carl Jung, but seems rather to be a Latin motto favored by the European alchemists of the 15th century: Liber librum aperit, or, “one book opens another.”

So it was that while re-reading George Orwell’s account of his time in a northern English coal-mining town, The Road to Wigan Pier, a book which also goes on to address socialism in general, I came across a reference to a book by Jack London, The People of the Abyss.

I was vaguely aware of London via his collection The Road, as well as dim but pleasurable memories of having to read White Fang at school in the 1970s. I was surprised at first to see him remembered at Counter-Currents as I had assumed him to be a writer of the Left, but good writing is good writing, a maxim that the Right understands where the Left never would or could.

The People of the Abyss is an account of London’s visit to, well, London at the beginning of last century and, as an account of poverty in the city of my birth, stands with Orwell’s own Down and Out in Paris and London and Victorian journalist Henry Mayhew’s wonderful book, London Labour and the London Poor.

London’s book is grueling reading made all the more poignant for me by the fact that I know so many of the streets and areas he mentions, having myself lived at all the compass points of London. I wonder what London the writer would have made of the east end today — “the City of Dreadful Monotony” as London claims was its nickname — in his time, a stronghold of Jewish trade and usury, now increasingly an Islamic micro-caliphate.

Before we turn to London’s book, a word on poverty. This is not intended to be my version of the Monty Python sketch known as “Four Yorkshiremen [2]” in which a quartet of successful northern Englishmen attempt to outdo one another as to who had the poorest childhood, but I have been poor. I consider that if you have ever had to glue the soles of your shoes back onto the uppers, pick up cigarette butts in the street for a smoke, and make night-time raids on the great metal bins outside supermarkets in search of sealed packages of food past their expiry dates, you at least know whereof you speak. All these I have done. But what is poverty?

My biblical namesake Mark, at 14:7 of his famous gospel, tells us that “the poor you will always have with you,” and, although modern social engineers are doing their best to expunge the Bible from the Western tradition, the World Health Organization has made this statement irrefutably true.

The difference between absolute poverty and relative poverty is uncomplicated but reveals an ideological schism. The former, as defined by the World Bank among others, states that anyone living below $1.90 a day is in poverty wherever they are. The latter — and this is where the WHO comes in — defines the poverty line as living on less than 60% of the median income of whichever country you happen to be in. The catch is obvious. Put simplistically and crassly, in a country where 90% of the population are billionaires and the rest mere millionaires, that 10% would be defined as living in poverty. No en suite bathroom in Austria? You are poor. You only have to look at Muslim migrants arriving on rubber dinghies off the Dover coast of England, resplendent in good-quality (albeit vulgar) clothes and training shoes and jabbing at iPhones to see the fault line in the definition. Using relative poverty as an indicator, the poor you will always have with you because that is what mathematical logic dictates if those with less money are index-linked to those with more. But, with genuine poverty, you know it when you see it, and Jack London unquestionably saw it.

“In the summer of 1902,” writes London, “I went down into the underworld of London with an attitude of mind which I may best liken to that of the explorer.” And what a journey to the heart of darkness was waiting for him there. World-famous travel agents Thomas Cook were baffled that someone would even want to go to the east end of London, the agent being more concerned about the possibility of having to identify London’s corpse than he would have been if the writer had visited Africa. Tibet, yes, but Whitechapel? London’s cabbie was equally uncomprehending, but reluctantly drove the writer around to his first epiphany:

Nowhere in the streets of London may one escape the sight of abject poverty, while five minutes’ walk from any point will bring one to a slum; but the region my hansom [a horse-drawn cab] was now penetrating was one unending slum.

You can buy Mark Gullick’s Vanikin in the Underworld here. [4]

Buying old clothes so as to be effectively undercover, London proceeds on his journalistic odyssey. There is no question of any “relative poverty” in what follows. The constant scrabbling of under-nourished folk to gain the few miserable pence necessary to keep themselves and their family alive for another day and just fit enough to work punishing hours in a crippling workplace makes Dante’s journey through hell with Virgil look like a day at Disneyland because it is unquestionably real.

London does not refer to hell, but rather christens the existential wasteland through which he voyages “the Abyss,” and it is not long before he has formed a firm and eugenic opinion of the fate of the creatures who dwell in that demi-monde:

And day by day I became convinced that not only is it unwise, but it is criminal for the people of the Abyss to marry. They are the stones the builder rejected.

As London travels among these discarded stones, he builds up a gradual picture of despair, his prose more elegant than Orwell’s and less inclined to the statistical than Mayhew’s. London the city is desperation made real, and London the writer notes that “the Abyss seems to exude a stupefying atmosphere of torpor.” A combination of hunger, smoke (London’s visit was over half a century before the city’s 1956 Clean Air Act at least stopped people dying simply for breathing), and a crippling workload for those fortunate enough to be in work, has genetic as well as moral effects, meaning inevitably that “the children grow up into rotten adults, without virility or stamina, a weak-kneed, narrow-chested, listless breed.”

As for dwelling standards, again, London is writing some 30 years before the first real attempts by city councils to clear the slums that dominated London, and even these were cut short by the onset of World War 2. London’s journalistic eye gives a hideous vision of the dwellings of the people of the Abyss:

I looked out of the window, which should have commanded the back yards of the neighbouring buildings. But there were no back yards, or, rather, they were covered with one-storey hovels, cowsheds, in which people lived. The roofs of these hovels were covered with deposits of filth, in some places a couple of feet deep — the contributions from the back windows of the second and third storeys. I could make out fish and meat bones, garbage, pestilential rags, old boots, broken earthenware, and all the general refuse of a human sty.

Jack London is respectfully aware of the fact that he does not wish to be seen as some sort of voyeur of the grinding poverty he observes, making acquaintances but never questioning too much as “it is not quite in keeping to take notes at the poorhouse.” His respect for the poor devils he sees is surprisingly moving, as are the tales told by the various Londoners with whom he spends time in conversation.

Perhaps the saddest aspect of London’s observations is the way in which the poor will still cheer and weep at the pomp and pageantry of those partly responsible for their plight. London’s visit to his namesake city coincided with the coronation, on August 9, 1902, of King Edward VII, and London viewed the procession of the new monarch and his Queen, Alexandra. The chapter is one of the most powerful in the book, and shows both London’s skills as a journalist, and the fathomless sadness of celebration among those Abyss-dwellers who require something to celebrate, as they have nothing else:

And now the Horse Guards, a glimpse of beautiful cream ponies, and a golden panoply, a hurricane of cheers, the crashing of bands — “The King! The King! God save the King!” Everybody has gone mad. The contagion is sweeping me off my feet — I too want to shout, “The King! God save the King!” Ragged men about me, tears in their eyes, are tossing up their hats and crying ecstatically, “Bless ‘em! Bless ‘em! Bless ‘em!”

And, as a coda to his journey through hell, London apportions blame, and it is an accusation which echoes down 120 years to the Western world today. London poses a simplistic question to which he has an equally plain answer:

There can be only one answer — MISMANAGEMENT.

Of course, we are now seeing the results of the mismanagement London wrote of, as our modern elites, worthless poseurs such as Trudeau and Johnson and Macron, swan around in their finery, from attending soccer matches the rest of us can’t go to, to leaving tonnes of food uneaten at their last G7 shindig. And we may well now be in the endgame, with enemy tanks (or scimitars) in the street while our dear leaders are still trying to decide whether Ionian or Doric columns would look better on the new stadium. London saw, 120 years ago, that “a vast empire is foundering on the hands of this incapable management.” But then, in The People of the Abyss, London saw much.

London the city and London the writer. The Mile End Road, The East India Dock Road, Commercial Road; arterial thoroughfares of the east end of London which I cycled and walked many times 20 years ago when my canal boat was moored in Bow and I worked in Blackfriars, and it is always moving to read in literature of familiar places. I once sat in The Market Tavern pub in London’s famous Borough Market, right by Southwark Cathedral and just round the corner from Shakespeare’s (admittedly relocated) Globe Theatre. I was reading Dickens’ first novel, The Pickwick Papers, and had reached a point at which Mr. Pickwick, Sam Weller, and the rest of the crew reached Borough Market on some hectic quest and entered. . . The Market Tavern. At that moment the pub door opened, and I actually looked up, fearful of seeing an incoming gang in Victorian dress. I would, of course, have expired on the spot.

The London of today, like the rest of the West, suffers from a different type of poverty, a moral paucity, a lack of vision, a malnutrition of the soul rather than the body, and a soft totalitarianism gradually hardening in the forge of globalism. And management is still to blame, something Jack London saw with the same eyes with which he witnessed the tragic dignity of those too weak to ever be strong.