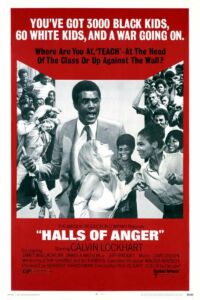 1970’s Halls of Anger is low-budget, tense, sensational, but real. Calvin Lockhart plays Quincy Davis, an ex-basketball star who’s happy teaching in a suburban high school until integration comes and he’s reassigned to a ghetto school, as are several white students. The principal, Boyd Wilkerson (John McLiam), couldn’t care less about his students; he wants more federal money (from integration) and a chance to get elected to the school board. The bussed white students are harassed and disliked by blacks. Although the black kids have recently flooded the city, it is now “their school,” and whitey isn’t welcome. The whites segregate themselves at one table in the cafeteria that the blacks call “Rhodesia.”

Quincy is conflicted. He misses white schools, where there is an appreciation for literature and order, and he doesn’t have to keep disciplining kids or ignoring remarks that he’s a Tom or an Oreo. With white people, he is safe, and has a kind of power over them as a magic Negro. He doesn’t particularly like it; he just wants to be accepted as an equal. The black kids cut him no slack. They’re confrontational, rowdy, and talk back to him.

In the literature class, Quincy assigns Hawthorne’s House of Seven Gables. The black kids can barely read and have no interest in it. One white kid, Doug (Jeff Bridges in his screen debut), easily reads a whole paragraph, a revealing moment over the stupidity of the blacks (although I can sympathize; Seven Gables, like much of Hawthorne, is like reading concrete). Bridges is later cornered and beaten by a gang for this. The official reason was that he was “looking at our sisters.”

Leaky, another white student — played by a young Bob Reiner before he went on to All in the Family — gets the stare from the bruddahs when he looks at a black girl.

Interesting, too, is a mural the kids make of black heroes. It’s noteworthy one of their main “heroes” is John Brown for trying to organize a slave revolt. Being white, he is of course not on the list anymore, although Brown seemed more effective than most black rebels at the time (See my review of Santa Fe Trail [2]).

When the black kids riot and trash the school, the mural is destroyed. When the school is wrecked, Wilkerson is less inclined to call the police because he wants to get something out of this for his rise to power. He’s a good study of what the education bureaucracy was doing to schools then.

Quincy sees the white kids surrounded by a mob, and Doug takes another savage beating. Funny how Quincy, for all his even-handedness, won’t protect Doug, nor will Lorraine. It’s a subtle, probably unintended part of the script that white students are simply at the mercy of blacks. Quincy’s conflicts and moral concern never translate to regulating his own “people.” The cops come to the rescue, and Quincy finally takes sides. . . with the black students against the principal, calming cries of black power as he urges the kids to go back in and “beat the man by getting an education.” It’s not very convincing, but Quincy casts his lot with the black kids. He is now their reluctant leader.

But the brutalization of white kids is an itch that can’t be scratched. The movie’s depiction of white kids bullied and harassed showed a reality many of us knew all too well. The white kids with their good grades and manners are just not acceptable. Black violence against whites wasn’t confronted by filmmakers then or now, and Halls of Anger deserves marks for this, even though the film shows things from Quincy’s point of view.

Halls also touches on a problem not often mentioned: black students who try to excel are harassed and bullied by their fellows for acting too white. There is, deep down, a dislike and incomprehension of higher education by a large percentage of blacks. Things have to be dumbed down to them. In 1970, this was simply not spoken of by the system. Halls of Anger showing hints of this was liberal heresy.

I remember reading a LIFE magazine story at the time the film was being made, and it mentioned a lot of on-set tension. The film crew was white, and they called Lockhart “Super-nigger” because of his attitude and continual tardiness on the set, never a likable thing in the theater world. There were also concerns when they shot a scene of a white actress being attacked by black girls. Everyone was worried about its shock value, especially since the black actresses claimed they had to “control” their presumably justifiable anger. Not a word about any opinions of the white actress. It was black, black, black.

The actual scene is very brief, and was probably cut so as not to gain too much sympathy for whites. Again, for all the realistic depiction of black attitudes, the film won’t come out and side with the whites.

Of course, there are unmentionables in the film. No black guy ever looks or comes on to white girls, and the movie’s depiction of the white kids being brutalized isn’t really interested in their suffering. It’s all about Quincy and saving the black kids.

When I went to high school at this time (one black student out of 500), I heard what was happening, and a student transferring from Saint Louis city schools gave a lot of gory details, but back then, it was all Room 222, where everyone was pleasantly integrated and every black teacher a Sidney Poitier.

Watching Halls of Anger, I’m reminded of when, in 1970, all our racial problems were solely black and white. No other muds were on the scene, and the movie, shot in LA, would now be overrun with Hispanics and a brace of other minorities, now usually squeezing out the blacks. A hint of the future was in the film Up the Down Staircase, where a New York City high school had an equal mix of whites, blacks, and Puerto Ricans, and probably shortly after 1967, when it was filmed, the school went all black or PR.

But for all the sensationalism, Halls of Anger at least realistically depicts being white in a minority world. Such views were and still are prohibited in the media. For once, you get a real view of race.

A big change between then and now is that in Halls of Anger there is an agreement that black kids should get an education, and the school is there to provide one. Nowadays, schools are little more than holding cells. Teacher’s unions seem dedicated to stifling any sort of real learning, and almost encourage the opposite. I recall one Chicago teachers’ strike many years ago, where one angry black female teacher defiantly held up a placard reading “I teaches English.”

Halls of Anger was criticized for being too “sensational.” I think this means it gave away the game of black behavior when America still assumed it was Martin Luther King time, and little black children going to integrated schools with the stern but kindly US Marshals or federal troops protecting them was the rosy future of racial integration. In effect, this movie was a gaffe. As Boston reporter Howie Carr put it, a gaffe is inadvertently telling the truth. Halls of Anger is a gaffe, all right. The truth of the death of public schools is now all around us, and much of the cause was integration, which the system will defend to the death.

Nowadays, with open hatred of whites more or less government policy, a film like this is an example of how when “we” whites had all the power, we simply gave it away in hopes of being “fair.” But fairness then, as now, only leads to anger against us — anger not only confined to the halls, but everywhere.