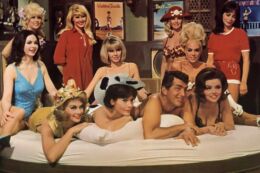 As I embark on the seventh decade of my life, it occurs to me that only during the first decade — the 1960s — did my identity feel congruent with the times around me. I was born into an America that was 88.6% white during a time when there was little reason to even be aware of being white, since we were simply considered the norm and anyone who was nonwhite was considered “ethnic” — a deviation from the norm. It was also a time when Americans, at least the overwhelming majority of us regardless of creed or political affiliation, seemed convinced that America was the greatest country the world had ever seen and that this was a fact that would only be questioned by mental deviants and grubby subversives.

The 1960s, especially the latter half, would prove to be the fork in the road. With few exceptions, that’s when modern Americans feel the country either started falling apart or began a righteous process of cleansing itself from its unforgivably hateful past.

This isn’t meant to imply that I was normal in the 1960s, because I’d be a social outlier no matter which century I’d been born and what country the stork decided to drop me. But being encased in a little Irish-Catholic suburban-Philly cocoon during my early years, I was likely sheltered from much of the division that began gnawing at the country in earnest during the 1960s.

It’s been my observation that people who are socially and psychologically abnormal only begin to really feel it when they hit adolescence, and it was around age 12 that I began living in the past.

I tend to go through phases of either arrogant extroversion or deep introversion, and right around age 12, the social world around me lost focus and I lost myself in the Marx Brothers, who made eight of their 13 films in the 1930s. My monomaniacal fixation on Groucho, Harpo, and Chico (everyone agrees that Zeppo was dispensable) served to blur out the world around me to a degree that made me prefer the world of the 1930s to the world of my youth.

Without blinking or missing a beat, as I neared age 15, I swapped out the Marx Brothers for Jesus Christ. While all the guys around me were discovering girls, muscle cars, drugs, and Aerosmith, I was alone in my room desperately trying to reconcile the Old Testament with the New Testament. I was so freakishly immersed in Christianity, even the nuns at my high school told me I was overdoing it.

You can buy Jim Goad’s Whiteness: The Original Sin here [3].

My faith eventually fell by the wayside as I concluded that I couldn’t even reconcile the New Testament with itself, but within a few years the 1980s rolled around and my newest mode of escaping the times around me was to become the only male in Delaware County, Pennsylvania with a greased pompadour, leather jacket, 1959 Oldsmobile Dynamic 88, and a musical playlist consisting almost exclusively of Eddie Cochran, Gene Vincent, Jerry Lee Lewis, and Buddy Holly. Just as I’d escaped into the 30s during the 70s, in the 1980s I found refuge in the 1950s.

As the 1990s dawned — or darkened, depending on your perspective — I came to realize that the social gospel that had been drilled into my skull since the 1960s was a lie and that there was no such thing as innate human equality. I began to accept, gradually and then all of a sudden, that evolutionarily acquired differences among groups of divergent continental ancestry explained the world around me far better than the infantile bugaboo of “racism” could ever hope to explain it, and I’ve never looked back—or maybe it’s more accurate to say I’ve never looked forward — since.

Earlier this week, my wife and I left our ranch house southeast of Atlanta for a one-day vacation in the mountain village of Helen, Georgia — a two-hour drive and a world apart. A few centuries ago, the area in and around Helen was occupied by the Cherokee. European settlers began pouring in during the early 1800s. A century ago, it was a logging town, but by the late 1960s, Helen was in decline until developers decided to retrofit the entire place so that it resembled a Bavarian village [4]. The remodeling was so successful that Helen — which occupies only two square miles and has a permanent population that barely squeaks past 500 — is now the third most-visited city in Georgia behind only Atlanta and Savannah.

As you might have guessed, I felt more “at home” in Helen during our one-day vacation than I’ve felt in the squalid outskirts of Atlanta for the past fourteen years.

We rented a room with a hot tub and sat with the bubbling jets drowning out the sounds of the motel TV as we watched the silent versions of a string of offerings from the 1960s. I clicked the remote straight toward Turner Classic Movies because I can’t stand to watch any modern films.

First up was 1966’s The Silencers, starring Dean Martin as Matt Helm in a comedic ripoff of the James Bond films. Dino was his typically suave and carefree alpha male self as he shot and banged his way through a bevy of voluptuous, gorgeous, and unapologetically feminine women such as Stella Stevens, Daliah Lavi, Nancy Kovack, and Beverly Adams. Victor Buono, despite his shockingly blue eyes, hammed it up as the evil Tung-Tze, an Asian malefactor seeking to launch a nuclear war by bombing an underground test facility in New Mexico.

Then we watched the same year’s The Undertaker and His Pals, a gruesomely bloody slasher film in the vein of Herschell Gordon Lewis. But just as with The Silencers, I realized that despite the fact that this film was made in the full throes of the Civil Rights era, back then most men still looked like macho greasers from the 1950s and women still looked so rampagingly hormonal and fertile, I wouldn’t be surprised if one were able to see their eggs with the naked eye.

When I got back home I learned that back in 1966, police in Kentucky had confiscated a print of The Undertaker and His Pals because it ran afoul of laws banning “the publication of materials dealing with bloodshed, lust or crime.”

Modern films are packed to overflowing with bloodshed, lust, and crime. You simply aren’t allowed to say “nigger” or suggest that there’s anything good about being white.

Unlike the 1960s of my youth, the last couple decades have marked an era when the Überkultur has been openly hostile to my very existence as a white male and has tagged me and people like me as the villains in all of their modern mythmaking.

So whereas my escapist forays into the past during my younger years were likely more a factor of my innate status as a misfit, these days it’s a sign of mental health for me to wish I was living in the past.

Don’t forget to sign up [5] for the weekly email Counter-Currents Newsletter for exclusive content, offers, and news.