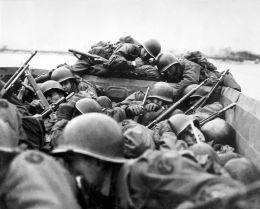 I took a rare day off on Memorial Day, but it had nothing to do with mourning dead American soldiers. Naturally, this didn’t stop me from being bombarded by the endlessly treacly and corny “conservative” online finger-wagging about how I need to honor all the dead soldiers who ostensibly shed their blood to protect my freedoms.

Exactly what “freedoms” are you talking about there, Gomer Pyle? I hardly have the freedom to speak. I have zero freedom to refuse working from January 1 to at least mid-April [2] every year simply so the government can extort the fruits of my labor and spend it on more wars.

I can’t think of the last American war that I thought was justified, and I keep drawing blanks when I attempt to comprehend why sending young men overseas to either die or come back maimed and psychotic has the slightest thing to do with “preserving our cherished freedoms.”

About a quarter-century ago I read IRA activist Bernadette Devlin’s autobiographical The Price of My Soul, and no amount of Googling enabled me to find the first line of the book, but from memory, it went something like this: “My father went to fight on behalf of the British in [name of war] and returned home with one leg.” It was one of the most compelling opening salvos of any book I’ve ever read.

My father went to fight on behalf of “American freedom” in World War II and returned home shell-shocked and hopelessly addicted to alcohol. I remember my mother telling me of how she would pray every night — to no avail — that his drunken tantrums would cease. He drank a full bottle of whiskey or Scotch every day from 1945 until 1980. He stopped drinking a year before he died, but by then his body was too wrecked to salvage.

My brother went to fight on behalf of “American freedom” in Vietnam and also returned home shell-shocked and hopelessly addicted to alcohol. Sometime in the mid-80s, he swapped out the booze for a 12-pill-a-day habit of opioids, muscle relaxers, sleeping pills, anti-anxiety pills, and antidepressants. It sucked the soul out of the first and only hero I’ve ever had.

In early 2007 while we were eating at a Thai restaurant, I told my brother that I noticed he never actually talked about what he did in Vietnam. I asked him if he’d engaged in direct combat.

He told me that he had. As part of the Army, his role was to crouch in the jungle and start shooting in the direction of the Viet Cong, and when he and the other grunts successfully lured the gooks out from their hiding place, American choppers would come in and slaughter them right before his eyes.

And that’s all he got to tell me, because at that point, he took off his glasses, started crying uncontrollably, and muttered, “Bush doesn’t know what he’s doing to these American kids in the Middle East.”

I knew then to never ask him about Vietnam again. But years after that conversation, he still wore his “Vietnam Vet” baseball cap as some sort of misguided tribute to the war that forever destroyed his mind.

Around the same time I read Bernadette Devlin’s The Price of My Soul, I also read 1935’s War is a Racket by former Marine Corps Major General Smedley Butler — who, as grim fate would have it, was born only 16 miles from where my brother and I were born. These are the first lines of that polemical tract:

WAR is a racket. It always has been. . . . It is possibly the oldest, easily the most profitable, surely the most vicious. It is the only one international in scope. It is the only one in which the profits are reckoned in dollars and the losses in lives. . . . A racket is best described, I believe, as something that is not what it seems to the majority of the people. Only a small “inside” group knows what it is about. It is conducted for the benefit of the very few, at the expense of the very many.

I am not sure why my father’s commanders told him he was dropping bombs on Germany, but it’s likely it had something to do with protecting our freedoms. What I’m almost certain of is that if he could have seen what America looks like in 2021, he would have preferred to wind up speaking German.

I know that they told my brother he was fighting communism over there so that we didn’t have to fight it over here, only for America to wind up far closer to communism in 2021 than modern Russia is.

If given the choice — which was a freedom I was denied, as I was never even asked — I would rather have had a functional father and brother than whatever illusory “freedoms” you claim I’m privileged to have in this country.

Can anyone explain to me precisely what these “freedoms” are? Beyond that, can you explain why you think it’s worth the cost?

The Revolutionary War was ostensibly fought as a tax revolution, but a mere decade after it was fought, George Washington sent troops into western Pennsylvania to crush the anti-tax Whiskey Rebellion.

The pro-war patriots seem to think that over 600,000 dead white soldiers were worth it to free four million black slaves in the Civil War, only for us to never even receive so much as a thank-you note from all the freed blacks.

They have convinced themselves that over 100,000 dead Americans and an additional 200,000 injured Americans justified us getting involved in World War I, but I bet not a single one of them could explain one thing that war had to do with freedom.

They appear to believe over 400,000 dead and an additional 600,000 or so wounded in World War II — which was ostensibly fought to save the Jews — wasn’t nearly enough and that we keep having to fight proxy wars for Israel up until the current day, but I bet none of them could explain a single thing we get in return or why we don’t have the freedom to criticize Jews without being destroyed.

Classical conservatism was completely against foreign interventionism. Whatever the modern GOP has morphed into has nothing to do with classical conservatism or liberty. Instead, it’s this giant rainbow-colored tumor strapped with nuclear missiles. How do these flag-waving, warmongering “conservatives” justify the post-9/11 wars that continue to cost American taxpayers over $32 million per hour [5]?

Surely there are better ways to spend that money. One risks smearing any soldier who risked his life in the post-9/11 interventions as a sucker. Many of them appear to be people who weren’t smart enough for college but whose labor would have been much better spent fixing our highways or working in factories than blasting hajis.

And this has nothing to do with me being a peacenik. I’m obviously combative. But I don’t think many — if any — American soldiers are fighting for their own interests. They probably suffer a net loss for fighting in foreign wars. The only real wartime situation right now, as I see it, is at the Southern border. It’s an invasion. Put the troops there.

And why do we even need soldiers at this point? Just as we can get robots to flip burgers, we have plenty of machines that can turn sand into glass without ever experiencing PTSD.

I recall a great commercial they used to show in the early 70s on TV. You see an empty wheat field. Then two limos pull up. Then two men get out who are obviously supposed to be the US and Russian presidents. They start brawling in the field. The voiceover said, “This is how it should be.”

Instead, we have poor and working-class American men who are sometimes forced to offer themselves as cannon fodder because the elites who send them overseas have also sent all the jobs overseas. If there’s a freedom that should hold primacy over all others, it should be the freedom from having to risk your life — or at least your soul — to protect the interests of those who’ve never even been in a fistfight.