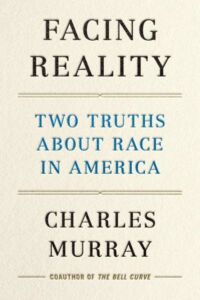 One of our readers has asked my opinion of Charles Murray’s new book Facing Reality: Two Truths about Race in America (New York: Encounter Books, 2021). I breezed through the ebook version of Facing Reality in just a few hours. I think that this book’s publication is an encouraging sign, and I hope that it will be widely read. America has long denied fundamental truths about race, but in the past year, the costs of these lies have become unbearable. In the words of Jef Costello, we need to “Speak the Truth or Kiss it All Goodbye.” Many new minds have been opened to our message by BLM and Critical Race Theory, so Murray’s book has appeared at an opportune moment.

The first truth Murray writes about is that different races in America have different average IQs, which means that they will perform differently in life even in the absence of racial discrimination. This is a very clear and compelling summary of the best science on the issue. This uncomfortable truth means that blaming the unhappy plight of blacks in America (overrepresented among the poor and ignorant, underrepresented among the prosperous and educated) on white racism is not the best explanation, since these patterns persist even in the absence of anti-black discrimination. Indeed, it persists despite pro-black discrimination. It also implies that we will only achieve racial “equity” by discriminating against other races for the benefit of blacks.

The second truth Murray writes about is that different races in America commit crimes at different rates. This is again a useful summary of the latest data. The reason why blacks, especially black men, have so many run-ins with the police is that they commit a disproportionate amount of crime. It has nothing to do with police “racism.” Indeed, if the police are “racist” at all, it is by under-policing blacks and over-policing whites. (See my article “Black Lies Matter” and Richard Houck’s “Law Enforcement and the Hostile Elite.”) Black Lives Matter’s sole purpose and effect is to make it safer for blacks to commit crimes, which has predictably led to an explosion of black crime. (See my article “Do Black Lives Matter?“)

I want to focus on a feature of Murray’s argument also mentioned by Taylor and Devlin. Murray warns the current establishment that if they don’t stop promoting non-white identity politics that they are courting a terrible disaster: the rise of white identity politics. Murray instead hopes that America can embrace a color-blind liberal individualism recommended by the Reverend Martin Luther King, Jr. in that speech. It’s all so tiresome.

I am sure that Murray is being sincere. But he really couldn’t say anything else if he wanted his book to be published by a mainstream press and reviewed in the mainstream media. The entire cultural and political establishment in America is united in holding that “racism” and identity politics are terrible things — but only when they benefit white people. This spurious moral dogma is what separates us from the rest of the political spectrum. A morally outrageous double standard is the only thing holding back the floodwaters of white identity politics. But the waters continue to rise, as multiculturalism and open borders continue to ravage white societies.

I don’t know if Joe Sobran coined the phrase “courtier journalist,” but I first learned it from him. A courtier is someone who advises or amuses the powerful. Courtier journalists do this with their pens. It is not necessarily ignoble. For decades, I have been reading Patrick Buchanan columns where he cites historical precedents in order to warn the powerful about the consequences of their follies. He speaks as a member of the establishment to fellow members of the establishment. He assumes a common commitment to preserving the system, then argues that his proposals are the only way to do that.

Murray is one of a host of conservative or neoconservative “courtier scholars” who in recent years have argued against identity politics and for race-blind individualism by raising the specter of white identity politics. For instance, see my reviews of Mark Lilla’s The Once and Future Liberal, William Galston’s Antipluralism, and Francis Fukuyama’s Identity (here, here, and here).

It is flattering, I suppose, to be the stalking horse behind which neocons seek to dial American politics back to their preferred policies. As long as we aren’t loved, it is at least nice to be feared.

But the neocon gambit isn’t going to work, for two main reasons. First, the Left isn’t trying to preserve “the system.” They are trying to destroy it. Some of them hate the system even more than they love themselves. Thus they would be content to destroy it even if they suffer. Second, asking non-whites to dial back their identity politics is basically asking them to replace a winning strategy with a losing one. Nobody in his right mind would do that, no matter how nicely conservatives ask, no matter how piously they intone those lines from the Declaration and the “I Have a Dream” speech. Thus, self-respecting whites will be driven to white identity politics out of sheer self-preservation. (For more on this, see part 1 of my essay “White Identity Politics: Inevitable, Necessary, Moral.”)

Yes, it is tiresome to be invoked as a boogeyman. But in the long run, people like Murry, Lilla, Galston, and Fukuyama are doing us a favor. Their color-blind civic nationalism isn’t going to save white America. And as more whites realize this, white identity politics will seem far less scary than being treated like a conquered people in their former homelands. Thanks for the free advertising, Charles.

Counter-Currents is trying to raise $200,000 this year to sustain and improve our work. Since last week’s update, we have received 18 donations totaling $4,709.41 for a total of 472 donations and a grand total of $65,750.61 since we started our fundraiser on March 10th. That means we are over 30% of the way to our goal. We are deeply grateful to everyone who has helped out. Full information on how to donate appears below.

« Hollywood & the Nazis, Part One: We’re All Jews & Germans