A Response to Nathan Cofnas 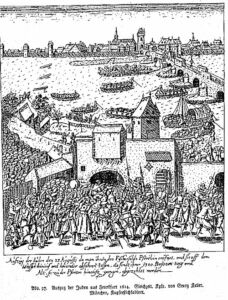 Georg Keller, etching depicting the expulsion of Jews from Frankfurt, 1614.

The tenacious Nathan Cofnas should be applauded for exposing Kevin MacDonald’s theory of Judaism as an evolutionary strategy to a popular audience. However, though his arguments appear insightful, it is evident that Cofnas has not succeeded in proposing a plausible alternative to MacDonald’s theory. According to the “default hypothesis” promulgated by Cofnas, Jewish involvement in influential movements that are not overtly anti-Semitic is explainable by higher IQ scores and concentration in urban areas.

Cofnas argues that brilliance aided by the right intellectual infrastructure will produce the ingredients for Jewish success. On this score, he is correct — the dominance of Jews has been pervasive in environments characterized by higher levels of trust and innovation. Trust is an important variable because it limits our skepticism of foreign intentions and lowers barriers to collaboration. By this measure, trust promotes wide-scale networks able to support the careers of Jewish intellectuals. Hence, intelligence fails to explain the prominence of Jews in political and cultural affairs. Jewish success is a unique expression of the dynamism of Western culture.

Because of their higher intelligence, Jews in Africa and the Caribbean will be successful, but they are likely to be dwarfed by their Western peers when judged by creativity. Unlike the West, such societies are not incubators for creative destruction. Many scholars from Louis Rougier to Ricardo Duchesne have debated the reasons for the breathtaking intellectual output of the West, so these arguments will not be rehashed in this piece. Readers only need to accept the caveat that to achieve stratospheric success, Jews require an intricate combination of intelligence and cultural infrastructure.

After submitting his explanation for the disproportionate representation of Jewish people in intellectual movements, regardless of their aims, Cofnas must tell us why other groups with an IQ advantage are not equally prolific. Despite their intelligence and prosperity in foreign countries, Asians are not active in political movements. One factor that can predict a group’s participation in the cultural space is personality. In a recent article, social psychologists attribute the success of South Asians to higher levels of assertiveness:

Of significance is that Asian Americans are the least likely group in the US to be promoted to management, notwithstanding high levels of education. This finding is unsurprising, since management positions select for aggression and Asians are more passive. The failure to account for the inability of other intelligent groups residing in urban enclaves to participate in intellectual movements with equal fervor creates a gaping hole in Cofnas’ rebuttal.

On the issue of Jewish ethnocentrism, Cofnas thinks that MacDonald’s arguments are unsupported by data. Using intermarriage rates as an indicator of low ethnocentrism, Cofnas asserts that “Jews have the highest intermarriage rate of any religious group in the United States.” But this does not prove the futility of MacDonald’s theory. Cofnas failed to note that Judaism as a cultural outlook is central to the identity of Jews, even when failing to profess the faith. The percentage of Jews identifying as Jewish based on culture and ancestry has recorded a major increase. Furthermore, relative to other Americans, Jews display higher levels of religious knowledge about Judaism and non-Jewish faiths.

By recasting Judaism as a bonding mechanism to foster Jewish identity, one can develop a better understanding of Jewish ethnocentrism. When we say that Jews are ethnocentric, this does not suggest their dislike for other cultures, but that they exhibit a strong preference for Jewish culture by highlighting their distinctiveness as Jews. Interestingly, in enumerating his case against MacDonald, Cofnas implicitly admits that intermarriage is not indicative of a desire to associate with non-Jews: “Some unknown number of Reform marriages are between Jews and gentiles who underwent nominal Reform conversions, so the real intermarriage rate is higher — probably considerably higher.” From this statement, we can conclude that the necessity of conversions, even if “nominal,” is evidence of Jewish ethnocentrism.

Jews have always reveled in the notion that they are distinct. Isaac Schwab in The Sabbath in History posits that observing the tendency of Jews to perceive themselves as separate from civilization is well-documented: “As to the Jewish separateness, Tacitus has given vent to his intense annoyance over it, especially their being ‘separate as to meat and marriage with others.’” Being a monotheistic religion in the ancient world, preaching separateness, made Jews the target of hostility. Moreover, holding influential positions in foreign societies does not preclude Jews from maintaining a peculiar culture. Shaye J. D. Cohen writes:

Even the most Hellenized of Jews, e.g. Philo of Alexandria, belonged to Jewish communities that were socially distinct from “the Greeks,” no matter how well these Jews spoke Greek, knew Greek literature, and assimilated Greek culture high and low. “God-fearing” gentiles may have associated themselves in some way with synagogues and other Jewish communal institutions, but unless they became proselytes (“converts”) they were not members. A non-Christian Jewish community which admitted Jews and non-Jews alike, without prejudice and (in the case of males) without circumcision, is nowhere attested in antiquity.

The decision to retain a distinctive culture cultivates contempt for Jews in Western civilization. Although Jews are a permanent fixture in the West, to many, they have remained strangers. Essentially, Cofnas is yet to undercut MacDonald’s argument that “Jews are particularly ethnocentric” because he refused to delineate the contours of ethnocentrism. Judging by the evidence presented, Jews are exceptionally high in positive ethnocentrism in that they express deep pride in Jewish identity. Consequently, Jews may not directly express outright hostility to foreign cultures, but their high level of positive ethnocentrism suggests an unwillingness to confer equal value to foreign cultures.

Similarly, the crux of MacDonald’s theory that Jews evolved traits enabling them to undermine Western society is insufficiently addressed by Cofnas. Because Jews have encountered discrimination in Western civilization for centuries, they would be motivated to view Western institutions with skepticism. For example, David Nirenberg, in his pathbreaking publication Anti-Judaism: The Western Tradition, gives credence to the idea that Western civilization is in conflict with Judaism or at least ideas claiming to represent the faith. As such, an aggressive culture of critique would emerge in Judaism since their survival depends on them being alert to plots intending to minimize their presence in society. This can explain why Jews often overreact to criticism, since aggressive responses force institutions to over-police criticisms of Jews, thus lowering the likelihood of successful plots to harm Jewish people. Notably, pointing out that Jews recommend disruptive cultural policies for both Western societies and Israel cannot render MacDonald’s theory irrelevant, because the main issue is that Jews have evolved to undermine society either directly or indirectly through the channel of criticism. Considering that Jewish culture promotes critique, the pendulum can swing in any direction. So, clearly, there will be some outliers who promote diversity in Israel.

Nathan Cofnas offers an interesting perspective, but he must return to the drawing board. Providing a compelling rebuttal requires Cofnas to debunk MacDonald’s position that Jews evolved a bevy of traits resulting in their propensity to erode confidence in Western society. So far, he has shown the obvious: Jews are overrepresented in intellectual movements due to IQ and residence in urban areas. But until he can disprove the essence of MacDonald’s theory that Judaism is an evolutionary strategy, he lacks a believable response.

» Is It Okay to Be White?: An Interview with Rémi Tremblay