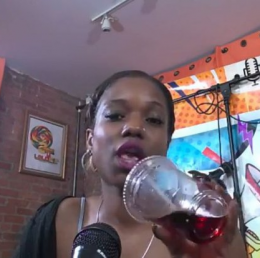 Jessica Beauvais [2] is a 32-year-old black New Yorker whose major accomplishments up to last week were receiving four separate citations for driving with a suspended license.

Because everyone’s a star these days, last week Miz Jessica posted a nearly two-hour livestream on Facebook where, in between taking hits of weed from a vape pen and drinking vodka and wine, she made the following ululations regarding da police:

If you said that you were signing up for this dangerous job and part of that dangerous job is that you are not supposed to be afraid — as part of that job is that people might try to fucking kill you. . . . That’s what you’re signing up for — potential death like in the army. That’s what you signed up for. . . . Like NWA [hip-hop group Niggaz Wit’ Attitudez] say about the police — if you’re going to kill me, at least I get to take someone with me. I’m one of those people. If I’m going to go, someone is coming.

A few hours later, while her blood-alcohol level was nearly twice the legal limit and she was barreling down the Long Island Expressway, she slammed into 43-year-old NYPD Highway Officer Anastasios Tsakos, who is of Greek ancestry, with such force that she sent him flying 150 feet and injured him so severely that he was declared dead at the hospital.

Tsakos had been redirecting traffic after another person of color, this one a Hispanic male, was driving with a suspended license and had also caused a fatal crash.

In other news of Blacks Behaving Badly last week, 30-year-old Randon Wilkerson of Delmar, Delaware has been arrested and charged with stomping a 54-year-old white cop to death [3] after the policeman had responded to a 5:00 AM call about a black male attacking a couple in their seventies.

Then there’s the story of 40-year-old Shannon Blackson [4] of Baton Rouge, Louisiana, a scorned woman accused of repeatedly harassing her husband after he shacked up with a hotter piece of tail, then fire-bombing his house.

And of course, there was also the now-weekly story of blacks brawling at a Florida airport [5], this time in Miami.

Personally, I liked them better when they were called Negroes.

Removing the “Stigma” of Purposely Exposing Someone to HIV

According to stats — which can be skewed, but stats are all I have — roughly 13,000 Americans [6] die of AIDS every year, whereas about 50 [7] Americans give up the ghost yearly as a result of “hate crimes.”

Between purposely exposing a sex partner to HIV and committing a “hate crime,” guess which one they’re trying to destigmatize?

The changes in the laws decriminalizing HIV are an incredibly important first step in ending discrimination and lessening the stigma experienced by people living with HIV. HIV right now is like, should be like, living with diabetes or high blood pressure. It shouldn’t be different than that.

But it SHOULD be different, because you can’t give anyone diabetes or high blood pressure by fucking them in the ass. And it’s also disingenuous to claim there are any laws that “criminalize” having HIV; they criminalize not disclosing your positive status before trading your precious bodily fluids with someone. Previous Virginia laws had made it a felony to have sex with someone without informing them that you are HIV+. But SB1138 [10], which blackface-wearing [11] Governor Ralph Northam recently signed, not only downgrades the criminal penalties for “infected sexual battery” — it makes it LEGAL for HIV+ Virginians to donate blood, organs, or bodily tissue.

Whom the gods would destroy, they must first give AIDS.

Charles D. McMillan [12] is a black veterinarian in the Atlanta area who was at least smart enough to get a DVM degree rather than syphilis in Tuskegee, Alabama. In a recent essay, he asks the question, “Why so much whiteness in the veterinary profession? [13]”

McMillan moans that “we should be careful to highlight that all elite professions — not just veterinary medicine — suffer from underrepresentation of Black professionals.”

It’s debatable whether any of these “elite professions” actually “suffer” from not being glutted with black practitioners, but I’ll grant him the fact that blacks are underrepresented in many areas that require high degrees of intelligence and discipline.

He says that blacks are “retained at a lower rate than members of the dominant group” but attributes this to “racism” rather than the fact that anyone who has ever worked with black people realizes that they call in sick roughly four days a week:

Racism plays a role here because Black candidates who desire a career in veterinary medicine routinely get passed over by non-Black candidates. This occurs because Black candidates may not have attained the same level of success or experience leading up to applying to these institutions. . . . Finally, lack of representation makes it harder to visualize the goal of becoming a veterinarian, likely leading to Black people favoring other career options; options that may be deemed more likely to raise one’s social status.

Hard experience and a gift for pattern recognition have led me to blame anything BUT “racism” for black failure.

Maybe there are more white veterinarians because white people are 75% more likely [14] than blacks to own pets?

Or because blacks are 36% more likely [15] to abuse animals compared to whites?

Or because whites are far likelier than blacks [16] to be animal-rights activists?

Or because many black Americans viewed NFL quarterback Michael Vick [17] as a persecuted victim of the White Supremacist Prison-Industrial Complex rather than a monstrous creep for drowning and electrocuting dogs?

Or because blacks do things such as put dogs in microwave ovens [18] and beat raccoons to death with a baseball bat [19] — while filming it — in protest of police allegedly treating blacks “like animals”?

What they refer to as “racism” is merely a reaction rather than a cause.

You can buy Jim Goad’s Whiteness: The Original Sin here [21].

Even though my dogged research has revealed that the only thing Mexicans ever invented was the humble nacho [22], Mexicans persist in being among the proudest people on the planet. Then again, inexplicable pride is often a defense mechanism designed to mask understandable shame.

That’s why it’s both hilarious and sad that a group of seven “Indigenous Mexican Zapatistas [23]” have set sail in a little wooden boat from the Caribbean hoping to “invade” Spain by August to mark 500 years since a tiny group of Spanish Conquistadors crushed the dubiously mighty Mayan and Aztec pseudo-empires.

The members of this micro-armada have officially declared that they don’t intend to conquer Spain, because even they aren’t dumb enough to think they’d be able to attempt such a coup without being crushed like cucarachas.

In an official statement, the Zapatistas announced [24]:

We are going to tell the people of Spain two simple things. One, they did not conquer us; we are still here resisting, in rebellion. Second, they do not have to ask that we forgive them for anything.

One, the Spanish obviously conquered you. That’s why, five centuries after conquering you, over 90% of Mexicans speak Spanish and nearly 90% of them are Christians.

Second, why didn’t you conquer the Spanish 500 years ago instead? Was it because you were too nice? I don’t think that applies to a civilization that performed open-heart surgery by hand to appease the gods that fled once the Spaniards arrived. It’s probably because, even after 500 years, the best you can come up with is a little wooden boat that may sink at any point in its journey toward Spain.

Then again, if I were a black American, I’d be pissed that the Injuns get all those casinos.

My purple gums would be inflamed with rage at the fact that numerous Injun tribes [26] owned black slaves, and many dragged them along with them as chocolate-colored workhorses during the Trail of Tears. I’d be shitting hot angry bricks at the fact that what were known as the “Five Civilized Tribes” — the Cherokee, Choctaw, Chickasaw, Creek, and Seminoles — all owned slaves and conspired with Paleface to keep Da Black Man down.

Of those tribes, the Cherokee owned black slaves at a per-capita quotient comparable to Southern whites. Perhaps out of guilt, the Cherokee are the only one of those five tribes that currently recognize “Freedmen” — which is what blacks were called after slavery ended and they became free to milk white people for handouts — as members of their tribe. And this only happened in 2017 as the result of constant legal harassment.

Now comes news from the Chicago Tribune [27] that a fat black Oklahoman woman named LeEtta Osborne-Sampson, whose ancestors were enslaved by the Seminoles, has whined to the Powers That Be about being turned away by the Seminole Nation for a free COVID-19 vaccine shot because the Seminoles, may the Great Spirit bless them, refuse to provide free healthcare for the descendants of people whom they once treated as beasts of burden.

I’ve made my contempt for Quentin Tarantino [28] quite clear, and just like blacks complaining about slavery and Jews kvetching about the Holocaust, I refuse to shut the fuck up about it.

I will give him credit, though, for convincing a huge swath of the American public that it’s brave and edgy to make movies saying that slavery was wrong and that the Nazis were bad.

I’ve never seen his 2009 film Inglourious Basterds, but from what I can glean, it’s a “revenge” film against the losing side of World War II.

As preposterous as it is to feel as if you need to get revenge against the losers, it’s not that Tarantino stands alone in taking this angle­ — from all you hear from every angle, one would get the impression that the Jews lost that War. What actually happened is that World War II marked the greatest victory in Jewish history.

The winners write the history books and all that, you know?

I was once told by a Jewish boss — he was a nice and friendly guy, don’t kill me for saying so — that all of the great American comic-book superheroes were created by Jews, and I’m starting to suspect that he was correct.

DC Comics [29] has announced that the Flash is heading backward in time to defeat Hitler as if he wasn’t already defeated and to snatch the Spear of Destiny from his Evil Nazi Claws.

It takes a special kind of psychology, one that is alien to me, to never stop complaining about winning the biggest war in world history. If I were prone to using slurs, I would call these people “jerks.”