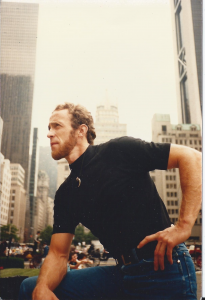 Ron McVan is an American white nationalist and Wotanist. He has followed a lifelong career in the fine arts as an oil painter, pen & ink illustrator, sculptor, poet, writer, stained glass artisan, jewelry craftsman, and musician. His extended interests have always been wide and varied, ranging foremost in the martial arts, philosophy, the ancient mysteries, mythology, European history and heritage, comparative religions, and spiritual studies, most particularly in Gnostic Wotanism and Druidism. He is the author of the books Creed of Iron, Temple of Wotan, Voice of our Forefathers, Way of the Druid, and Kvasir’s Trove [2], and an illustrator of numerous books, including Might is Right.

Ron McVan was born in Philadelphia, Pennsylvania in 1950. He won his first citywide art competition in 1964 at age 14. His paintings have been exhibited in galleries and museums nationwide and purchased by numerous private collectors and art investors.

Acutely sensitive to the rapid decline of Western culture, the relentless unconscious abuse of Nature and Earth, and the cultural decay and exploitation of America by avaricious “Power Elite” exploiters, the artist has made it his personal life quest throughout the past 40 years to awaken and enlighten those of European heritage, both young and old, to the indigenous ethnic roots of their ancestors.

Ondrej Mann: Does anyone often ask you for an interview?

Ron McVan: I receive them all the time, as well as offers to attend ceremonies.

RMV: That is new to me, but I will certainly check it out this evening! 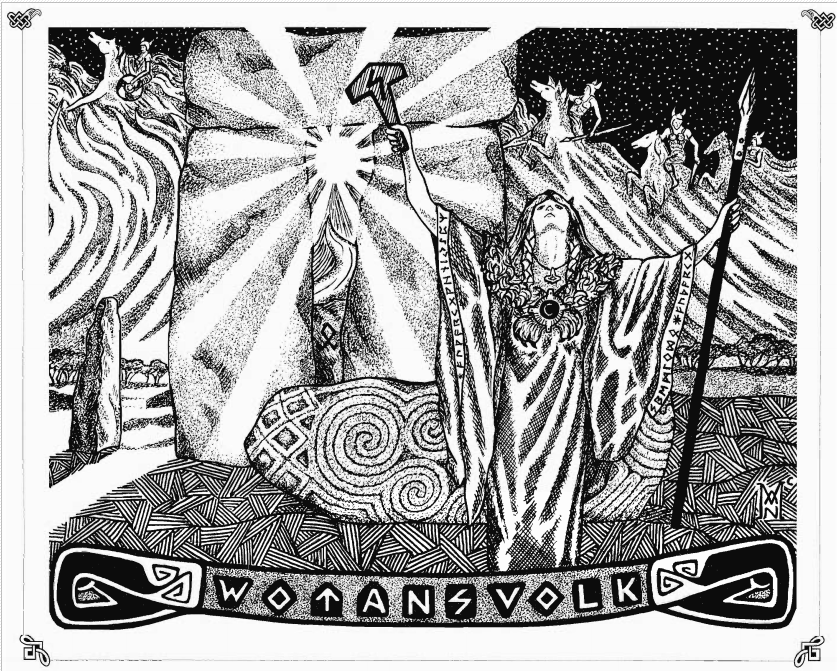 OM: Is Wotansvolk still active? What activities did Wotansvolk organize in the past?

RMV: Wotansvolk was disbanded in 2001 due to a betrayal from my business partner Katja. David Lane was my other business partner, also betrayed by Katja. She ran off with some guy in Germany and stole half a million dollars of my books and merchandise. Katja was also never married to David, that was a lie that she had concocted. Wotansvolk/14 Word Press was a mail-order business that supplied Wotanists worldwide with Viking merchandise, a monthly newsletter, and inspirational writings and artwork. We also had a major prison outreach.

OM: What is the place of sexuality in your religious system?

RMV: We are very focused on our men and women having beautiful healthy families, so we naturally promote normal relationships between men and women.

OM: Do you think that you have already published your major works in the form of Creed of Iron and Temple of Wotan? Are you still preparing any great works?

RMV: I would say that although my first two books were indeed quite successful, I still feel that the best is yet to come. The most major book I am working on is titled Titans of Time, which will feature a good segment of the greatest minds of all time, in all fields of art, science, military, music, and so forth. That will certainly be quite a challenge in the research. I am also now working on a new novel titled Sea King (A Viking Story) which will be a deeply philosophical writing. 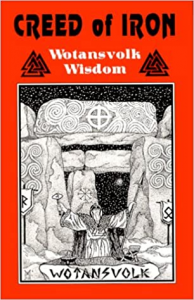 [4]OM: How many copies of Creed of Iron and Temple of Wotan have you sold?

RMV: That would really be hard to say, because as I lost control of those books 20 years ago when they were stolen from me. That was 13 tons of my books!

RMV: I am not at all familiar with Buldok and Graveland. I’ll have to check that out.

OM: What music do you listen to?

RMV: I grew up in the heart of rock-n-roll in Philly, through the 50s and early 60s where it all began on Bandstand and in New York on the Ed Sullivan Show. Philly had lots of dancing going on, so that is where I got the rock-n-roll bug and love for music. At this late stage of my life, I am leaning more towards where I should be in this era, which is Viking Metal, Viking Folk music, and Battle Metal. I am at that crossroads right now of going full steam in that direction. There is lots of room for creativity there, especially with my long background in the Viking Lore.

OM: Would you change anything in your life?

RMV: My life started out with art and music in the 60s, as did my love for history, for Western culture, and my concern for the survival of the European tribes, culture, and traditions grew from there. That concern for my race only grew stronger through the decades that followed. I also branched out into a wider range of the arts personally in my life, so I would have to say that there is not a whole lot that I would change. I was self-educated with the vast amount of books that I have read over the years, and studied the ancient mysteries, which is how David Lane and I had become best friends through three decades. He too was deeply interested in the ancient mysteries. We were both ardent fans of Manly P. Hall and other great scholars. 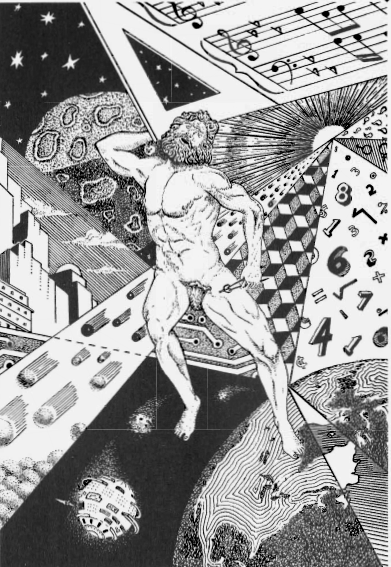 OM: I saw footage from your apartment. It was full of various statues and also various elves, dwarves, angels? What is the significance of these?

RMV: That is not any particular fascination, I just happen to collect things like that. But I do believe in the spirit world manifesting itself in many guises, which includes elves, angels, and the like.

OM: Do you plan to set music to poems from your collections as well?

RMV: Yes, I do plan to set some of my poetry to music. So far, I have been reciting my poetry over music and drum beats. My poem “21st Century Viking” was made into a rock song. I plan to do much creative work in that direction very soon.

OM: Do you have any relationship with the Slavic world?

RMV: There are some fantastic Folkish Heathen groups in the Slavic nations at this time, of which we here in the States are so proud of. The Slavs are passionate and strong people. It is so sad to see Russia fighting against its Slavic brothers and sisters. They are the same people, and fellow Heathens at that. The Slavs have their own pantheon of gods, but some follow the Norse and have read my books as well.

OM: I know that you wrote to Tomáš Fabian, the singer of the band Buldok. How was your contact?

RMV: I am sure that you are correct that Tomas Fabian had written to me, but I would have to go back and listen to his band Buldok to refresh my memory, which is starting to slip with old age.

OM: Do you have any personal memories of Bob Mathews?

RMV: Actually, I never met Bob Matthews. He kind of popped out of nowhere in the late 70s and started recruiting for his group, but he was not known by many until he launched into the scene with his “Order” group. No sooner did he start putting his ideas into practice did he meet his death at Whidbey Island. All of the Order were men of great passion, but David told me that Bob’s passion was extremely powerful and infectious. The Order was not a racist group, they were simply against race-mixing. They were an anti-government group, which not unlike today was profoundly corrupt to the core!

OM: How do you rate Kevin Flynn’s book Gary Gerhardt’s Silent Brotherhood? Was it accurate, or did it differ from reality in some detail? What was its co-author Gary Gerhardt like?

RMV: The Silent Brotherhood was not fully accurate according to the men of The Order, but it is not so bad that it was out to slander them with a mountain of lies. It was fair, as much as could be expected. The Order made some giant mistakes, and they would be the first to admit that. Bob made the group too large, which opened the doors to too many conflicting characters among them, which is sure to weaken any group. 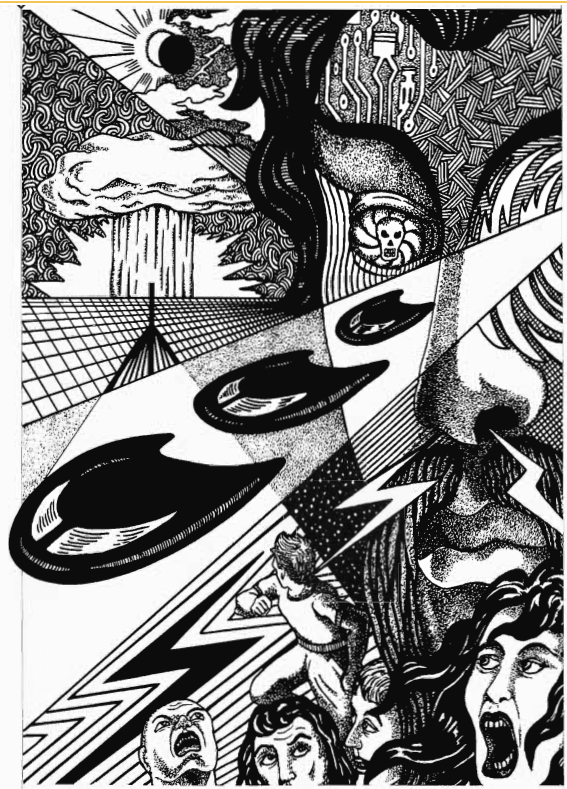 OM: Did your magical experiences shape you in any way?

RMV: I was very heavy into the writings of G. I. Gurdjieff back in the 1970s. I read everything that he and his followers put out. That opened my eyes to the fact that all that we view as reality is more of a distraction from the unseen forces around us. Later, I started reading Carl Jung’s work, and his idea of synchronicity opened a further awareness: that seeming coincidences are not coincidences at all. Jung also understood the powers of Wotan, which brought it all closer to home to me. I would say yes, that my experiences in the occult did indeed open my eyes and raise my conscience to a new level. 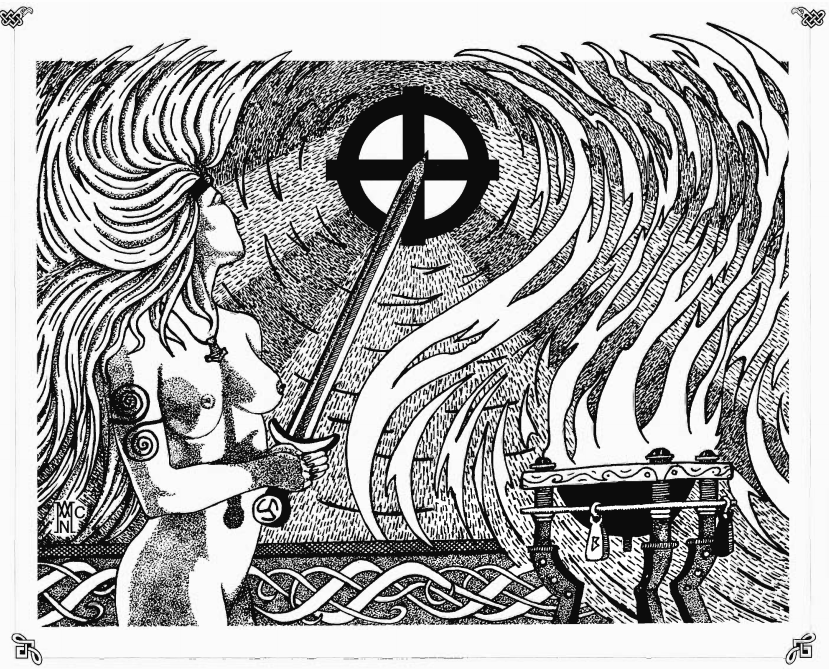 RMV: I do have dreams of the Asgardian gods, absolutely! Our ethnic gods are planted deep within our psyche. I would even take that further and say that they are within our very DNA. “The gods are man writ large,” as they say!

OM: How was your contact with Miguel Serrano? I know he wrote you a preface to the Temple of Wotan.

RMV: Miguel Serrano was a fascinating and mystical man. I will always regret that I missed my chance to visit him in Chile back in the day. He wanted me to visit him so that he could initiate me into his Hermetic Circle, which included such luminaries as Carl Jung, Herman Hesse, and the poet W. B. Yeats. He and I had an ongoing correspondence over the years.

OM: Is it possible to buy your books and art on the web?

RMV: Yes, all one has to do is type “Ron McVan Books” into Google and they can find them all on Amazon.

OM: What do you admire about the works of Hermann Hesse?

RMV: I started reading his works in the late 1960s and read them all. Hesse was deeply mystical in his writing and that always appealed to me. In Steppenwolf, he actually wrote that in a way that could be interpreted on three separate levels. I read it several times over to enjoy the book each time with new eyes. He is one of my favorite novelists!

OM: Where has the American pagan scene moved from the 60 years? What do you think about people like Stephen McNallen and Stephen Flowers?

RMV: I have truly enjoyed watching Odinism grow over the decades. It took a long time to find its feet, but we can thank Steve McNallen, Elsie Christensen and Stephen Flowers, Freya Aswynn, and a few others for keeping it alive and well through the early days on into the present. I guess I did my part through the second half of it all, but the early pioneers were crucial. By the 1990s, heavy metal bands had helped bring American Odinism/Asatru further out into the mainstream. Then, of course, the TV series The Vikings brought it into everyone’s home. Now Asatru and Wotanist kindreds are growing like wildfire everywhere. The will of Wotan is certainly rekindling within the hearts of his people at long last! Hail to the Gods! 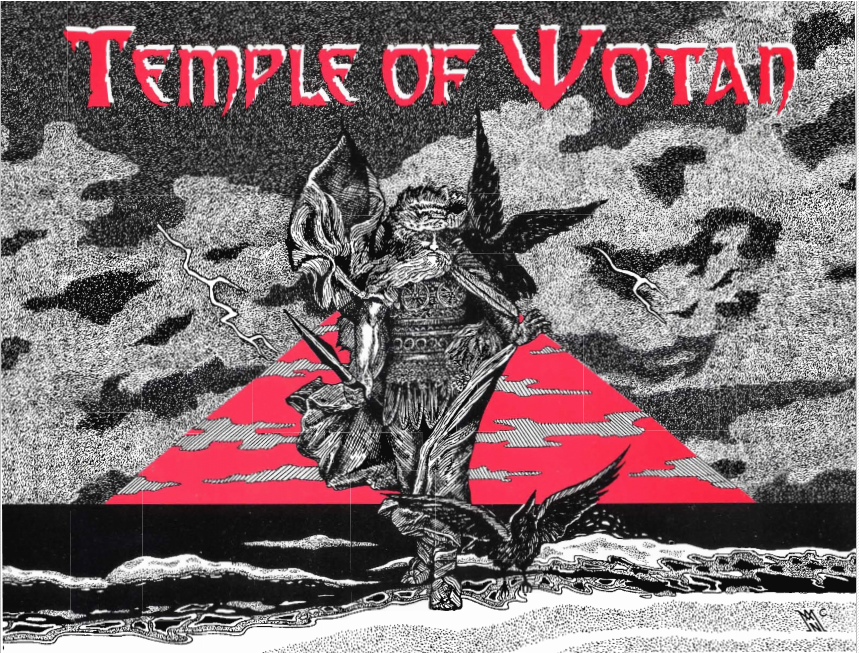 Out of Chaos came light,
Out of Will came life,
Without form, without time
From iron black space
Through beads of crystal flame.

Cosmic rays of light and sound,
Spinning in seas of universal ether,
Piercing the armatures of spheres.

The Spirit,
The Will,
The Wisdom,
Temple of Wotan.