What Could Be Driving Dysgenics in the Black Population? 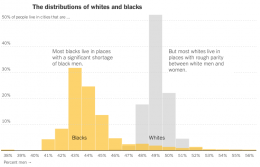 Scholars recognize that the persistence of the black-white IQ gap transcends social class — but we cannot truly explore the subject without discussing dysgenics. The heritability of intelligence indicates that smart people produce brighter children. On average, more educated women are unlikely to reproduce regardless of race. Interestingly, researchers note that in the United States, the negative association between intelligence and fertility appears to be stronger in the black population. In fact, trends show that less-educated black women have the highest fertility rate, thus amplifying the problem of low IQ in the black community.

Low marriage rates among educated black women are also compounded by the fact that they are less likely than other women to marry men with similar education. Research gathered by sociologist Vida Maralani reveals that 49 percent of college-educated black women marry a well-educated man (i.e., with at least some post-secondary qualification). This pales in comparison to the 84 percent of college-educated white women whose partners possess equivalent education.

Another major finding of social science research is that black women are reluctant to marry outside of their race. Black men are twice as likely to intermarry as black women. Intermarrying is a feasible alternative for black women, because there is a shortage of marriageable black men. According to Sawhill and Venator (2015), there are shortages of marriageable men among the black population, but not among the white population, except among the highly educated. The shortage of marriageable men in the black population is driven by high rates of incarceration, early death among black men, and lower levels of education making them less attractive partners.

Sociologist Cheryl Judice views the dearth of marriageable black men as a crisis and in her fascinating book Interracial Relationships Between Black Women and White Men, she implores black women to intermarry. In an interview, Judice reminds black women that due to the shortage of black men, failing to intermarry could result in them being single: “There are far more black women than there are black men in this country, and that’s been for some time. . . Right from age 16 and forward, black women start outnumbering black men. For whites, that doesn’t happen until age 32. . . As a result, if you don’t think about dating outside the race, then you may well wind up single.”

Due to the reluctance of educated black women to reproduce and marry intelligent men of different races, the black population cannot elude the striking reality of dysgenics. Yet the preference of educated black women is not the only contributor to dysgenics. Some studies declare that homosexual men compared to heterosexual men are more intelligent. Gay men are even reported to deliver better grades in college relative to their peers. Given the existence of the black-white IQ gap, it is likely that there are more intelligent white men relative to black men. Because the pool of intelligent black men is smaller, the black population could have a higher share of smart men who are gay.

On an anecdotal level, the homosexuality of decorated black men is obvious. Kwame Anthony Appiah, Jonathan Capehart and L. Z. Granderson are all gay. Surely, we cannot deny the eloquence of black homosexual commentators. Since many of these men may never have children, the black community will be deprived of intellectual assets. Furthermore, consistent with the broader pattern of homosexual people dating outside of their race, professional gay black men are likely to court white men. For example, all the commentators listed in this piece claim a white man as his spouse.

Further, even if interracial homosexual couples decide to have children by employing the biological faculties of women, there is no guarantee that the children will be black. The white partner may choose to be the sperm donor, so if the woman is white, then the product will be a Caucasian child. Similarly, if the donor is black and the woman is white, the child will be mixed, and mixed-race children may not identify as black. Also, they could intermarry with other races.

Based on the issues discussed in this piece, it is evident that the black-white IQ gap will remain pervasive. Moreover, IQ gains in the black population are unlikely to narrow the gap when accounting for factors promoting dysgenics such as the low fertility rate of educated black women and the possibility that the black population has a larger share of intelligent men with homosexual inclinations.

Eventually, mainstream thinkers must concede that public policy and environmental changes are unlikely to alter the IQ gap.

» Postcards from the Edge