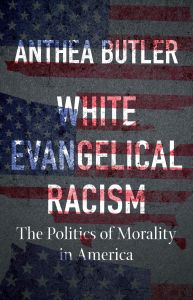 White Evangelical Racism by Athena Butler is a book where the author is correct, but only partially so.

Butler was an Evangelical Protestant and worked/volunteered at a mega-church in Southern California [2]. During a “community healing” event after the 1992 [3] Rodney King Riots [4], Butler was offended that the mother of the senior pastor didn’t recognize her when she was intermixed with a group of sub-Saharans from a black church. I think this response to such a misunderstanding is very petty, but who am I to judge such an affront to Blackness.

This sort of book will be lapped up by smug liberals that think they can think, but it is not a serious work of theological scholarship. Butler argues that Evangelical Protestantism was always for slavery, segregation, etc. even while she describes how religious denominations split over the slavery issue in the 1850s. Some of the denominations — such as the Presbyterians — have since reunited. The Baptists remain separate. (One can read Southern Presbyterian literature here [5].)

Butler likewise fails to recognize the considerable splits within mid-twentieth century Evangelical Protestantism. She lumps in Ministers Carl McIntire and Billy James Hargis [6] with Billy Graham [7] and Norman Vincent Peale [8]. These ministers had some of the same goals during the Cold War, might have been in the same room at some point, and might not have voted for JFK in the 1960 election (which was their right), but they had very different methods and end-goals.

As a side note, in the late 1990s, Billy Graham held a revival where I was living. The religiously inclined women at my workplace, both sub-Saharan and white, were excited for this event and both attended with their respective churches.

This misreading of data on Butler’s part comes out in other ways. She describes Evangelical Protestant attempts at racial healing as proof of her thesis. For example, in the 1990s, the anti-abortion activist Ralph Reed [9] called abortion “black genocide,” and the focus of the 1996 Promise Keeper’s series of revivals was racial reconciliation. [10] This is a somewhat strange way to go about proving one’s point that all Evangelicals are racists. If so, wouldn’t they be for “black genocide?”

Ultimately, Evangelical Protestants are damned to be racists no matter what they do or fail to do.

You can buy Greg Johnson’s Here’s the Thing here. [12]

The Issues of the Religious Right are a Proxy War

I believe that the Religious Right that took off as a political movement in the late 1970s was a legitimate white reaction to the “civil rights” disaster of the mid-1960s. Butler mentions, and I agree totally, that Evangelical Protestant political activism really started with the Green v. Kennedy (1970) [13] case that challenged the tax-exempt status of private, religious, and segregated schools. Issues regarding abortion were a way to rally Evangelicals to focus on judicial appointments to avoid another disruptive Warren Court “Black Monday [14]” type of situation.

Unfortunately, the Religious Right’s activism was a proxy fight for this struggle. To use a military metaphor, Evangelical Protestants defended a terrain feature — tax exemption for segregated schools — that they felt was important. Evangelical Protestants recognized that they wanted to keep their children safe from young, sub-Saharan wildlings while providing them a solid education. They chose to not take direct offensive action against the 1964 Civil Rights Act, which remains a major problem.

Racism is a Rational Response to Negro Pathology

“Racism” is actually a neologism. Marxists made up the term out of whole cloth sometime in the 1930s to impeach civically virtuous white Americans. By the sola scriptura [15] lights of Evangelical Protestantism, “racism” isn’t a sin. It isn’t anything at all.

Indeed, I’ll argue here that Evangelical Protestants, and indeed every implicitly white institution, should drop the pretense and flat-out embrace “racism.” Whites will be called “racists” no matter what they do or fail to do.

“Racism” is a rational response to the considerable pathologies of sub-Saharans, which include criminality, sympathy for criminals, lower average IQ, and the fact that sub-Saharans are a danger to themselves and others.

The way to fight one religion is with another. Evangelical Protestantism is an effective counter to the religion of Negro Worship. An example of Negro Worship can be found in the Anglican Christ Church in Zanzibar. The temple is filled with graven images of sub-Saharans and the graven image altar is where the whipping post supposedly was. Also, Zanzibar was the scene of a horrific massacre of Arabs by sub-Saharans in 1964.

Anthea Butler is also every bit as “racist” in her critique of Evangelical Protestants when she uses terms like “whiteness.” Such terms are, in fact, a dehumanizing call for violence — such as that in Zanzibar. Indeed, Butler only switched religions. She went from Evangelical Protestantism to Negro Worship.

All unstable political arrangements last around four score and seven years [16]. As this article goes to print, Brown v. Board (1954) is 67 years in the past and the 1964 Civil Rights Act is a mere decade younger. When proxy wars regarding the instability cease to be fought, the real war eventually comes about. Although the evidence in this book is contradictory, the book does strip away the proxy war aspects of Evangelical Protestantism’s social activism and argues for a direct conflict.

It’s a bit like moving the Cold War’s conflict from Vietnam to one of Soviet bombers attacking the cities of the east coast with hydrogen bombs.

Ultimately, the real conflict might be irrepressible. The entire society of the United States bends backward to accommodate the sub-Saharan population, despite that population being expensive, burdensome, and unproductive. Indeed, the Democratic Party seems to only exist to placate the needs of sub-Saharans. But there are too many frauds, too many problems, and too many expenses to keep this situation going indefinitely. Regardless, we all might come to regret the end of the ongoing racial proxy war.