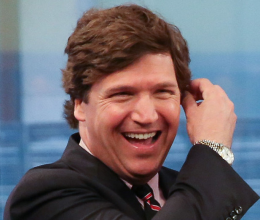 The Anti-Defamation League is a Jewish organization that exists for the sole purpose of defaming whites. Its current CEO, Jonathan Greenblatt [2], resembles an egg with AIDS.

People such as Greenblatt exult in gaslighting and doublespeak, which is why they both openly celebrate the demographic replacement of whites and call you crazy if you happen to notice that whites are being demographically replaced.

Tucker Carlson is a goyish news broadcaster who, when interviewing contentious guests, has perfected the “You’re mentally ill, and I’m concerned that you’re going to kill yourself or someone else very soon” facial expression [3] which at this point should have won him several Emmys.

During a recent conversation with Mark Steyn, Carlson suggested that Democrats are feverishly pro-immigration because at this point in American history, most immigrants are nonwhite and the only Democratic platform these days is “White people are Satan”:

I know that the Left and all the little gatekeepers on Twitter become literally hysterical if you use the term “replacement,” if you suggest that the Democratic Party is trying to replace the current electorate. But they become hysterical because that’s what’s happening actually. Let’s just say it. That’s true. I mean, everyone’s making a racial issue out of it. Oh, the, you know, white replacement? No, no, this is a voting rights question.

Carlson’s comments put the ADL in a right proper shvitz, leading Greenblatt to put down his buttered bialy with lox and tweet [4] out the following:

.@TuckerCarlson [5]: “replacement theory” is a white supremacist tenet that the white race is in danger by a rising tide of non-whites.

It is antisemitic, racist and toxic. It has informed the ideology of mass shooters in El Paso, Christchurch and Pittsburgh.

One would think that the head of the ADL would know how to spell “anti-Semitic.” One would also think that someone whose religion teaches that his people are preferred by God above everyone else would be a bit more careful about tossing around the term “supremacist.”

Never knowing when to shut the fuck up or stop overplaying their hand, the ADL shot off a letter to Fox News demanding Carlson’s termination:

Carlson’s full-on embrace of the white supremacist replacement theory on yesterday’s show and his repeated allusions to racist themes in past segments are a bridge too far. Given his long record of race-baiting, we believe it is time for Carlson to go.

Nearly 300,000 American soldiers died in World War II, and over a million were injured, only for their grandchildren to be called Nazis by an organization that butters its bagels with race-baiting.

Curiously, the ADL didn’t make a peep back in back in 2018 when Michelle Goldberg — sounds like a German or Dutch name if you ask me — penned an essay for the New York Times called “We Can Replace Them [8].” In the days leading up to a Georgia gubernatorial race pitting a white man against a fat black female wildebeest named Stacey Abrams, Goldberg could barely stop rubbing her hairy paws with glee at the fact that Georgia was only 53% white and fading fast:

Right now America is tearing itself apart as an embittered white conservative minority clings to power, terrified at being swamped by a new multiracial polyglot majority. . . . In a week, American voters can do to white nationalists what they fear most. Show them they’re being replaced.

I sort of envy the kind of mind that can hold two absolutely contradictory ideas at once like free-floating soap bubbles that never collide into one another and burst.

The surname “Rhee” is Korean in origin, and it is a documented fact that Koreans have the smallest penises in the world [9], which might help explain why they are so humorless and bitter.

Last week in Southern California, 37-year-old Michael Sangbong Rhee, reputedly enraged at the false media narrative that the recent spate of anti-Asian violence in America is “fueled. . . by white supremacy [10]” rather than “perpetrated by blacks,” allegedly pointed a gun at a woman sitting in her car in Irvine, California, pushed her into the backseat, sexually assaulted her with his angry inch, and then ran like a bitch when she began screaming. Surveillance footage captured his license plate, and according to police, Rhee said he attacked the woman because he thought she was white [11] and he was fed up to his yellow gills with all this anti-Asian violence he keeps hearing about on the news. The woman was actually Asian, which makes Rhee’s little stunt the funniest thing an Asian has ever done.

You can buy Jim Goad’s Whiteness: The Original Sin here [13].

If you’ve yet to have your fill of genocidally anti-white rhetoric in the media, worry ye not — two new series from HBO and Amazon may stuff your guts to the point where you won’t even be able to handle dessert.

I really have to watch this show, because I’ve been wondering for decades how such a backward continent was able to conquer all the relatively advanced and rich countries all across the globe for so long.

Starting with Jordan Peele’s Get Out, black horror movies that depict white people as scary monsters are all the rage these days, and Amazon has a new series by an over-moisturized black man who calls himself Little Marvin [15] that seeks to recreate the horrors that greeted black people when the Great Migration out of the South occurred in the post-WWII era. Called Them: Covenant [16], the first season will focus on a black family who moved to Compton, California, only to be welcomed with pickaninny dolls, the word NIGGER burned into their front lawn, a black woman getting raped while her infant is murdered, and a horrific flashback to the 1800s where a black couple gets their eyes impaled with hot pokers while the song “I Only Have Eyes For You” plays in the background.

While Little Marvin acknowledges that, no, OK, sure, some of these things really didn’t happen in real life, he says it was important to maintain “integrity and authenticity” by attributing to whites the sort of callous sadism that one is much more likely to see on a daily basis anywhere in sub-Saharan Africa.

Back in 1959 — before blacks pushed out the whites and before Mexicans pushed out the blacks — Compton was almost entirely white. You can get a sense of exactly how horrific and savage it was here [17].

In the dying town of Rochester, New York, two teens [18] aged 14 and 16 — the younger of whom was previously arrested for robbing a deaf man at gunpoint in a parking lot last year — have been arrested and charged with dousing a white man with gasoline and setting him on fire. The man, Steven Amenhauser, was hospitalized with burns over 70% of his body and finally succumbed to the Angel of Death while hospitalized. The teens’ names are Zayvion and Adriel, and that’s all you really need to know.

Nearly a month ago when a white incel shot up three Atlanta-area massage parlors [19], killing two whites and six Asians, the media was all ablaze about “white supremacy” and “anti-Asian hatred by whites,” and nary a chirp was made about the two inconvenient white fatalities.

But the Associated Press article [20] about the incident does not mention the race of the victims and instead focuses on the “quiet, troubled” gunman. It includes quotes about Adams being “somewhat depressed,” “such a good kid,” “such a good father,” and someone who “didn’t bother nobody.”

Well, he bothers me. And I’m sure he bothered the surviving family members of his six victims. But the Associated Press couldn’t be bothered to mention any of that.

It Starts With Words, Ends With the Holocaust

A TIME [21] magazine piece written by Sara J. Bloomfield of the United States Holocaust Memorial Museum and Greg Schneider of the Conference on Jewish Material Claims Against Germany claims that “The Holocaust Began Not With Concentration Camps, But With Hateful Rhetoric.”

I could be mistaken, but I thought that the Germans got the whole idea about concentration camps from the Russian gulags.

The article quotes a Polish Holocaust survivor to push forward the idea that words inevitably lead to violence provided that the words dehumanize a specific group:

We heard the words. . . the Jews were cursed, the Jews are traitors and all of the problems in the world starts with the Jews, therefore what we have to do is get rid of the Jews.

A companion piece for NBC News [22] written by Rachel Elbaum quotes Greg Schneider, who along with several ethnic cohorts is pushing the hashtag #ItStartedWithWords:

People don’t wake up one day to say I want to commit mass murder today, but it’s a process that over time people are dehumanized. That starts with words and ideas.

I’ll give credit where it’s due — at least they are finally admitting, if unwittingly, that white people are being set up for mass slaughter.