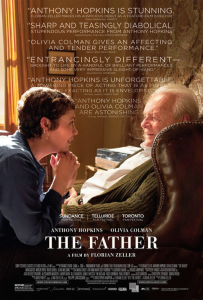 I’ve been reviewing Trump movies, and now it’s après moi, le deluge time. I saw The Father a couple of weeks ago in a typically empty theater, and was moved by its study of dementia and bravura acting by an excellent cast. Directed by Florian Zeller and based on his play, The Father tells the story of Anthony (Anthony Hopkins), an elderly man who lives alone in his shadowy apartment.

Anthony is visited by Anne (Olivia Coleman), his daughter, who tells Anthony she has a new attendant for him, as she is moving to France with a boyfriend. Anthony is confused. When did all this happen?

More confusion comes as Laura (Imogen Poots) is introduced, his new housekeeper. Anthony just fired the last one, accusing her of trying to steal his wristwatch. Still, he takes to Laura, who looks like his younger daughter. Anthony flirts, becomes randy and vivacious, and even passes himself off as a professional tap dancer, getting laughs — except from Anne, who must watch her father fall apart.

Anthony is outwardly delighted with young, sunny Laura, but still keeps an eye on his wristwatch.

Anthony’s happy world is now intruded upon scene after scene. Anne’s husband Paul (Rufus Sewell) enters, trying to be kind to Anthony, but his forbearance is obviously reaching its limit. But Paul is Anne’s husband. What happened to him before? Then, a strange man (Mark Catiss) comes out of nowhere, grinning as he taunts Anthony, asking when he’s going to quit being a bloody burden.

Anthony is stunned. What’s happening? Who are all these strange people, and why can’t they leave him alone? After rechecking his wristwatch, he keeps looking out the window at the park. He needs to go for a walk, noticing a young boy below, happy in its greenery.

Later, at dinner, Anthony becomes angry. Paul simmers as he hits the wine, wanting Anne to expel Anthony so they can have their privacy back. Anne is caught between devotion and exhaustion.

A strange woman (Olivia Williams) is introduced to an already-befuddled and suspicious Anthony, a new housekeeper. “But what happened to Laura?” he demands. Anne and the woman look at each other. Laura who?

We’ve seen films and stories before depicting a parent’s dementia through the eyes of children, but The Father is a masterful depiction of mental collapse as Anthony sees it, a world of changing scenes and faces, doors in the apartment that lead to nowhere, a closet that becomes a hallway, endless arguments and concern with the chicken dinner, and where his watch is. Who took it this time?

The doors in Anthony’s elegant apartment mostly lead to nowhere, until he opens one to find himself in the hospital where he is confined. Here is his real world. Anne has been in France for months, and the Man, now a male nurse, appears again and gives him a cold slap. Then the woman enters, in a nurse’s uniform, and consoles Anthony. They’ll take a walk. He needs his daily walk. Anthony is at first excited, then breaks down and weeps for his mummy to take him back home.

The Father reminds me of 1977’s Providence, where John Gielgud plays an aged writer at mental ends one night. His children are characters in a book that berate him, while outside, a dictatorship rounds people up to be sent away — but then morning comes, and his children celebrate his birthday, all warm and sunny.

But unlike Providence, Anthony’s morning will only bring another confusing hallway, leaving him reliant on the strange woman to find the right door to go outside.

Is The Father a Biden movie? Anthony is a stand-in for a senile clown. America — or at least the ruling class that pulls the strings — happily propped up Biden and enough people chose this wreck to be their leader. Are the globalists having a good laugh over who they foisted on our country, or are they themselves extensions of Anthony, caught in the past, muddled and incapable of doing anything except what has been done before? They can wipe out the competition, maintain a status quo of graft, moral decay, and rampant hedonism masquerading as “freedom.” And let’s not forget a good dose of bombing.

Anthony tries to keep grounded in an ordered past. He takes solace in listening to classical music. A painting by his younger daughter, who is due to arrive any moment (and died in an auto accident years ago), always soothes him as he pauses to study it. These pieces of sanity are islands in a rising demential sea. Biden? His islands might well be Korn Pop and fragments of long-lost speeches and rallies of yesteryear.

Biden was always mean and small-minded, another perpetual Senator we can never get rid of. He can recall just enough public presence to tap dance like the great leader the country presumably needs, or at least wave to the folks and offer that creaky smile that recalls the tired, waxed face of an embalming.

But if I have any real anger, it is toward the people who put this sad, pathetic man in office, rather than allowed him to spend the rest of his years with family. Anne or anyone else would be disgusted if they were told to use Anthony for a public purpose.

I wonder what Biden is like off-camera and carefully sequestered. Does he rant? Look at faces in confusion? Does he ask where he is and cry to the women who hold him?

Hitler said Germany was a nation of sleepwalkers. America might well be the land of the demented. We’re under the rule of Anthonys — older fossils, baby boomers who simply don’t realize they’ve had their time. Of course, if they let go and the staff is seized by the likes of Ocasio-Cortez, we may be exchanging the demented for the irrationality of communal dictatorship and, ultimately, racial replacement.

When I watched The Father, I was reminded of Japanese propaganda during the Second World War. The Japanese repeated that they were a new, young, and vigorous people, ready to seize an Asia dominated by aging white men unable to keep it except by underhanded capitalism and brute force. The senile white powers wouldn’t even possess the military strength to resist a strong Japan that would generously bestow to its brother Asians the blessings of the Greater East Asia Co-Prosperity Sphere.

Japan was proven wrong during that war, but I wonder if our own stagnant fathers might see such displacement come to pass. China need only bide its time while the old, confused father of the West banters, blinks, and demands to know to whom he is speaking — before beginning another breathless search for his stolen wristwatch.

The Father is a small movie, and more the better for that. If this Covid thing (crisis or reset, take your choice) kills gazillion-dollar films and we get fewer Wonder Woman Twos and more chamber dramas like The Father, then our crisis may have some good.

Back to the deluge!