Pressing the Snooze Button on the Ziological Clock 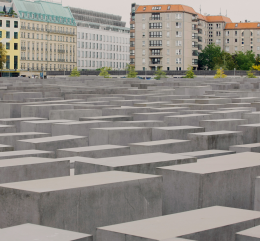 Memorial to the Murdered Jews of Europe, Berlin

For one, it permits me to advertise my latest articles and books and podcast appearances. For another, it’s the best way in world history to reconnect with people who’ve dropped out of your life for entirely benign reasons.

Enter Miss M — a New York Jew who can’t go five minutes without reminding you that she’s a New York Jew. Imagine Bettie Page with Ashkenazi features. A few days ago, she found me on one of the very few social media platforms that I use.

In the late 90s while I was imprisoned, Miss M used to send me pictures of herself (fully clothed ones — naked ones couldn’t get past the censors there) and friendly letters that revealed she was literate, funny, and irreverent.

She was around 20 back then, while I was pushing 40. At the time, I was mostly known for being a violent maniac, which has never hurt my prospects with the ladies. In fact, I never got much action with the ladies at all until I was widely known as a violent maniac. Female psychology is a strange and sick thing.

When you’re surrounded by nothing but male piss and sweat for over a year, any kind of female contact — even in a written letter — is welcome.

There had never been the merest hint of sex talk between us, but now she tells me — 22 years or so after the fact — that the pussy knows what it wants, and that’s why she wrote me back then, and that, duh, I should have realized that.

I only met her in the flesh once — around 2001 in Manhattan when she was already married and I was arm-in-arm with another Jewish girl who, as luck would have it, could never shut up about being Jewish and all the persecution and suffering her people had been forced to endure, despite being acutely aware that her background was much cushier and less trauma-laden than mine.

It appears that Jews never get tired of being Jews, despite all the pain they say it causes them.

The last time Miss M and I swapped any messages was around 2011, and she was bursting with glee about the “Iron Dome” and how it was protecting Israel.

She’s been with her husband for over two decades. He’s a retired Irish NYC cop who, long before retirement age, seems to have been granted a permanent leave of absence and a lifetime pension for PTSD. According to her, neither one of them has a full-time job, and they both travel the globe endlessly, which must be nice when you’re only in your mid-40s.

But it didn’t take her long to start kvetching about how fucked-up Trump was and how Jordan Peterson, Tony Robbins — what?­ — and Gavin McInnes had helped to soil the culture with their toxic maleness.

I told her that black women outlive white men in the US — which is a fact and has been at least since the early 1970s — and that I’m sick of the endless browbeating.

She took the hint and quickly switched to another topic.

She told me that she recently tried explaining the 1990s to a 30-year-old girl and was greeted with a blank stare. I replied that the 90s were when you could disagree with someone and not lose your job or have them try to murder you.

And that was true — back in the 90s, there was at least a sense that we were on common ground in America — that from coast to coast, despite ideological or genetic differences, at least the country felt like one solid chunk of land.

Another thing about the 90s was that no one who was remotely hip ever talked about politics.

She asked when I was going to come see her in NYC, which seemed rather forward for a happily married woman who’d been informed that I was married and, for the first time in my life, was deliriously happy as a result.

She inquired where she could catch up with my latest writings and creative efforts. I tried to tell her where I was working — one place being Gavin McInnes’ paywall video site Censored.TV — but the message wouldn’t send. So I removed the reference to Censored.TV. It still wouldn’t send. Then I removed the term “Counter-Currents.com,” replacing the names of both sites with [REDACTED], and the message finally sent.

I noted that we live in a world where people shit their pants over Trump but don’t seem the least bit concerned that Big Tech won’t allow me to tell someone where I work.

I told her — in a joking way because I’m intimately familiar with how women react when you straightforwardly reject their advances — that it was obvious what she was doing. I said this was clearly part of some Mossad honeytrap against me when I was happy with a woman for the first time in my life.

Regarding the offer of free books, she told me that I’m a real mensch, which is a word, she informed me as if I didn’t already know, that her “Ashkenazi people” use.

It occurred to me that as a “Nazi,” I’ve never once used a phrase analogous to “my European people” with her. I never browbeat her about the rampant anti-white bilge constantly pumped out by Jewish-owned media companies.

I said that it’s always amused me that the dominant strain of Jews has the word “Nazi” in its name.

She agreed and then switched the topic to travel. She asked me if I’d ever been to Germany — of course.

I told her I’d only been in Europe once — in 1985 for six weeks after graduating from journalism school. I wasn’t impressed with London or Paris but absolutely loved Berlin, Amsterdam, and Italy.

Maybe it was the fact that I said something positive about Berlin that set off the alarm on her Ziological Clock.

She pecked out a message about the history of European anti-Semitism and how the Jews insisted that a certain church building in Europe be kept standing just as a shame-inducing testament to how horribly the Europeans treated Jews.

Boy, when they said “never forget,” they weren’t kidding.

Did I need this? I’m supposed to just casually accept the guilt-tripping?

I typed out an angry message.

I said that I find Jews worse than Catholics with the endless shaming.

I said that the two World Wars arranged by bankers left about 100 million Europeans dead.

I mentioned the 45-55 million dead European civilians from World War II that no one ever seems to mention — especially the fact that 45 is a much larger number than six.

I told her that just like blacks, Jews seem saturated with the sort of ethnic self-interest that they absolutely demonize in whites, but if I’d dared to bask in my racial identity like she does, the FBI would open a file on me.

But instead of diving into yet another tiresome internet argument, I blocked her from my profile.

It would have been fun to continue talking about the 1990s and serial killers and Satanism and why I prefer early 1970s British glam rock to punk rock and why Eddie Cochran was superior to Elvis, but the clock has seemed to run out on such conversations.