London: No City for White Men 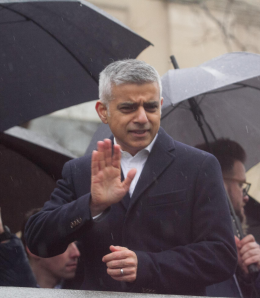 Genetically speaking, I am almost 100% a child of the British Isles, with my strongest links to recent ancestry being London, Dublin, and County Cork. Even that stubborn and pesky 4.3% “Spanish and Portuguese” quotient of my genetic makeup may simply be “Black Irish” DNA resulting from when the Spanish Armada dropped a few loads in the Emerald Isle half a millennium ago.

I’ve never set foot in Ireland, but I visited London for eight days in July of 1985, and the fact that it rained for seven of those days cured me of my rampaging teenage Anglophilia. I found it to be a disappointingly dreary place, especially compared to continental European cities such as Rome, Oslo, and Berlin. But thinking back, the only time I saw people who didn’t look like me was when I deliberately took the Tube south to see Brixton, a black ghetto immortalized in songs by The Clash and Eddy Grant. Back then, I had to go out of my way to see nonwhites.

Oy, how the worm has turned!

On May 6, London will be holding a mayoral election, and according to a recent poll, none of the current top four candidates are white men, despite the fact that London is still a majority-white city, if not for long. Those top four — a Pakistani Muslim, a Jamaican black, a blonde-haired woman who at least appears to be white, and a Jewish woman with “Spanish, Turkish, Egyptian, and Austro-Hungarian ancestry” — are currently eating up 89% of the polling figures.

Two white men — one a British-born actor, the other an American-born financier — are taking the fifth and sixth spots, sharing only a meager 7% between them. Tellingly, the Standard describes them as “fringe candidates.” Laurence Fox, the British actor, even gained “notoriety” when he accused a mixed-race female TV presenter of being a “racist” after she accused him of being “white, privileged male.”

It doesn’t take much to be notorious these days, does it?

Current London Mayor Sadiq Khan’s grandparents immigrated to England from Pakistan, and when he became mayor in 2016, it marked the first time in history that a Muslim was elected mayor of a major European city. Judging from his campaign video for reelection, one might think that London is three-quarters black rather than 15%. His first act as mayor was to appear at a Holocaust memorial extravaganza at a rugby stadium in North London. He calls himself a “proud feminist,” has vowed to show “zero tolerance for anti-Semitism,” and he vocally opposes “homophobia,” whatever that is. According to his Wikipedia page, “He and his family often encountered racism,” as if that’s something that can be proved. Under his watch, knife crime has skyrocketed in London and the city has surpassed New York in its homicide rate for the first time in history, but hey — he’s against racism and homophobia and anti-Semitism, so cut the short little bastard with dark, anus-like circles under his eyes some slack! The latest YouGov poll has him at 47%, and unless he murders and eats a black baby live on the telly, it’s almost certain he’ll be reelected.

His closest competitor, standing at 26%, is the coffee-bean-colored Shaun Bailey, whose parents immigrated to England from Jamaica in 1947. Bailey was involved in gang activity as a youth and has been described by former neighbors as a “free-loading scumbag” and “the most hated man in Kensington.” In a pamphlet he wrote in 2005, he claimed that festivals celebrating Muslim and Hindu heritage “[rob] Britain of its community” and threatened to turn England into a “crime-riddled cesspool.” In contrast with Muslims and Hindus, he said that blacks are more compatible with indigenous Britons “because we’ve shared a religion and in many cases a language.” Despite all that, his Wikipedia page says he “was subject to racism during the campaign on social media and in a letter posted to a Conservative party office.”

It would appear that everyone except white people is subjected to endless racism in England these days.

Oh — Bailey is running as the Conservative Party’s candidate, which brings into question exactly what he aims to conserve.

Coming in a distant third in the polls with 9% is the Green Party’s Sian Berry, a phenotypically white woman who claims that the Greens are “the only truly independent voice who can speak for the dispossessed and ignored people in the gaps,” which is quite rich coming from the mouth of some twat with an estimated net worth of $14 million.

Rounding out the Four Horsemen and Horsewomen of London’s Apocalypse is Luisa Porritt of the Liberal Democrats, a Jewess who is currently polling at 7%.

And then come the “fringe candidates” — the two white guys.

Laurence Fox — an “outspoken and often controversial actor” — is reppin’ the “fringe” Reclaim Party, which seeks to do extremist things such as ending the COVID lockdowns and building new statues rather than tearing down old ones. He is currently holding on to dear life with a piddling 4%.

Nipping at Fox’s heels with 3% is American-born banker and podcaster Brian Rose, who threatens to end life on the planet as we know it by “using science-based decisions when it comes to setting policy.”

As recently as March 28, another white male, Dr. Peter Gammons of the UKIP, was polling in fifth place, but according to the most recent YouGov poll, he has all but vanished from contention. VICE magazine published a smarmy article about how cutely coincidental it is that the term “gammon” emerged around 2018 as “an insult that refers to a certain kind of angry, puce, middle-aged white man who loves Brexit, hates immigrants, and votes Conservative (or indeed UKIP).” Then, after insulting angry white men, VICE scoffed at the idea that white men can even be insulted, seeing as they still hold all the power.

None of these smarmy, smackable MSM pundits seem to think it’s even a tiny bit weird that London’s top two mayoral candidates are Asian and black in a country that is still about 85% white and only about 8% Asian and 3% black. To them, this isn’t racial colonialism — it’s “justice.”

A hundred years ago, when that tiny little soggy island nation with horrendous weather and scant natural resources was unapologetically English, it boasted the largest empire in world history in terms of landmass, claiming nearly a quarter of all the planet’s terra firma and gloating that the sun never set on its domain.

Then the English were persuaded to feel guilty rather than proud about it, and now the sun is setting on England itself. These days, England is not even listed among the world’s “potential superpowers.”

Such is progress, I guess.

» Republicans Should Stop Pandering to Blacks