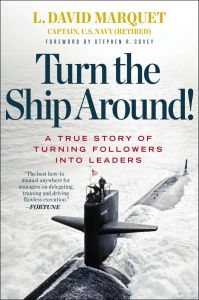 When one is 150 feet away from the control room, it’s easy to adopt a highly hierarchical management structure.

Captain L. David Marquet [2]‘s ship, the USS Santa Fe, went from being last in its various ratings in the submarine fleet to the very top. When Captain Marquet started his career with the Navy, he was inspired by tales of heroes such as Beowulf. After becoming terribly exhausted following around a submarine captain for only three days, he decided there must be a different way to command. His idea was to change the institutional culture of his submarine from leader-follower to “leader-leader.”

His first attempt to create this leader-leader culture was as an officer on the USS Will Rogers. The attempt didn’t work. His men simply wanted to be told what to do, he had no support from the chain of command, and only a limited vocabulary and set of ideas to really change things. After he noticed a problem that prevented the submarine from diving deep, he reverted back to the leader-follower mode of business.

The problem with the leader-follower way of doing things is if the captain makes an error, the entire crew will follow him like lemmings off of a cliff. Submarine business [3] is dangerous [4]. Usually, problems don’t cause a total loss, but failing inspections and other mishaps damage morale, can injure sailors, and end careers.

After leaving the Will Rogers, Marquet continued to believe in the leader-leader philosophy of command. To better articulate and carry out his ideas, he read books about human behavior, management, and leadership. He specifically mentions two books: The Seven Habits of Highly Effective People [5] (1989) and Out of the Crisis [6] (1982).

After taking command of the Santa Fe, Marquet introduced his new philosophy to his key leaders. He already had his senior enlisted advisor tuned in to his philosophy. He also made sure that at least one of his key leaders that agreed with his philosophy was present at this initial meeting to help generate support and enthusiasm for the ideas. He determined the first order of business was to change the cumbersome way to sign off on leave paperwork.

When analyzing the leave paperwork problem, he discovered that it was a symptom of considerable flaws related to the rigid leader-follower mentality. Sailor leaves had to be worked into maintenance and training schedules while the submarine was at base. By allowing the non-commissioned officers to set the training schedules of the enlisted sailors they were responsible for, leaves were easier to approve.

The positive benefits were felt immediately. With petty officers able to quickly approve leave for the young sailors they were really in charge of, morale improved. Other ways of doing business were examined so that the work was done and the unnecessary reports were eliminated. The submarine’s officers and senior petty officers also ran hard data on the crew’s proficiency score tests and determined where they could work to improve promotions. This also worked.

Then Marquet made a mistake, but he turned it into a teachable moment for himself and the crew. Marquet ordered the submarine to move at a certain speed setting that this type of submarine didn’t have. His crew answered “aye,” but then didn’t know what to do. Marquet discovered that they thought he must have learned something at Captain’s school about the propulsion that they didn’t know. His crew had blindly followed him like lemmings.

Marquet decided to change his approach. He would give clear guidance as to what the successful end goal was to be. The crew would then drive towards that goal by listing steps: “Captain, I intend to submerge the sub, intend to go to full speed, intend to fire torpedoes, etc.” Another idea was to have the men think out loud. That way, all would know why the pilot was steering the ship in a particular way. For critical events like creating navigation charts, the crew would brief the captain in intervals for guidance, rather than working hard on a plan that wouldn’t work and starting over from scratch.

To make the submarine more quiet underway, Marquet had the various departments report to the sonar room that they’d made a noise, like dropping a wrench. This was opposite of the sonar room self-monitoring the sub’s noise levels and then searching out offenders. This ended up giving the crew a sense of what was a serious noise and what was not. When the Santa Fe rigged for silent running, they were really silent.

Other directed ways of speaking followed. Marquet had his men introduce themselves to visiting dignitaries and inspectors with a three-name phrase: i.e., “Hello, Admiral Jones, I am Machinist’s Mate Smith, welcome to the Santa Fe.” Marquet determined that success was passed inspections, junior enlisted men looking officers and CPOs [9] in the eye rather than looking down, men buying USS Santa Fe t-shirts and cigarette lighters, boasting to their families about their unit, and reenlistments.

Marquet knew his philosophy was working when he gave an order and his bridge crew answered that the submarine needed to do the opposite. The mission was to get some SEALs returning from a Middle Eastern mission. The entire crew understood the goal and used their leader-leader mentality to be successful. The SEALs were picked up, and taken to a place to recover set up by the sailors on their own initiative.

The Dark Part of Leadership

Books like these are outstanding. Marquet’s philosophy clearly worked well on the USS Santa Fe. However, he does cryptically ask if he was “unintentionally protecting people from the consequences of their own behavior,” as well as when “is it right for the leader to overturn protocol in the effort to rescue a single stressed-out subordinate?” (p. 151).

Indeed, there is a dark edge to leadership. General Norman Schwarzkopf used his considerable temper and bellowing voice to get results. There are many ways to get it done, and it isn’t a popularity contest.

It is also helpful to be making gains when one’s organization is at the bottom. Any improvement is a sign of winning. What happens when one gets in an organization that is running at 85% and you want to take it higher? The challenges are certainly different.

A great sea story is that of Sir Ernest Shackleton’s ill-fated attempt to cross the continent of Antarctica. His ship, Endurance, became stuck in the pack ice. Had the ship had a rounded bottom, been made of steel, and had a quick starting gas engine rather than a coal-fired steam engine, they’d have been able to escape with the spring thaw, but the ship was crushed in the ice and the crew was left with their lifeboats on a frozen sea. The expedition’s members survived through the excellent leadership of Shackleton, the technical know-how of the crew, innovation, luck, and making their own luck.

Shackleton had carefully selected his crew before setting out. He is considered to be one of the finest leaders the British produced, but he still had to draw his pistol on a mutineer named Harry McNeish. McNeish was the ship’s carpenter. Leadership at sea always has the element of coercion. The real reason why there are Royal Marines (and US Marines) is that the ship’s officers needed a security force to protect themselves from the crew.

Leadership always requires some threat of coercion and firing people is part of the job. The three reasons to fire someone are:

However, one cannot be coercive on a submarine with atomic missiles. The kinds of people needed to keep such a ship going don’t take well to the lash. There is also no way to chopper a nonfunctional sailor off of such a ship. The US Navy handles this problem by carefully screening its potential submariners before they come on board. Admiral Hyman Rickover, who led the US Navy’s submarine program, famously personally screened all potential officers. Submarine training is also difficult, so every man coming into a submarine is solid. Properly leading such men requires a different sort of finesse than coercion to get to peak performance.

Regardless, Marquet has written a fine book about improving the involvement of one’s subordinates. It can be read quickly and is good to give to one’s subordinates at work. It is a clear addition to the excellent canon of management and leadership literature.