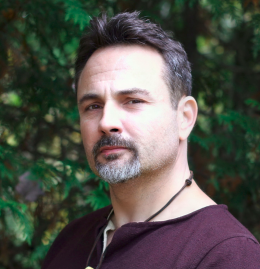 George Burdi is the warhorse of the white nationalist scene. He first became famous with his symphonic metal band Rahowa through the unique album Cult Of The Holy War, and later he founded his own label, Resistance Records. From 1993 to 1997, Resistance sold approximately 100,000 CDs combined from all bands. But Burdi saw no perspective in the white nationalist skinhead movement, and sold Resistance Records to William Luther Pierce.

Now George Burdi is interested in the spiritual path, supports identitarian ideas, and admires France’s band Les Brigandes. According to him, they have great songs, entertaining music videos, and most importantly a true and honest cultural revival surrounding the group. Burdi also started a new audiovisual art project, Revolt Against the Modern World, featuring music and visualizations inspired by and reading from the well-known book.

In this interview, we discuss Evola’s books, poetry, dreams, magic, metapolitics, and music.

Ondrej Mann: What do you think about mixing art and violence? Medieval troubadours like Bertran de Born mixed fighting weapons with the practice of poetry.

George Burdi: All physical action begins in the mind. Unless one is madly just thrashing out at the world — kicking against circumstance in desperation — the origin of all acts of violence is the intellectual premise it is built upon. That having been said, violence as a tool for political change is totally counter-productive. If you have a standing army, then violence can be a justified means of protecting sovereignty, but it is a trap for dissident movements.

OM: Do you know any poetry by Rudyard Kipling, like “A Song of the White Men,” “The Stranger,” “The Burden of Jerusalem?” What kind of poetry do you like? Tomáš Fabian from Buldok made music for various poets on the album Creed of Iron. Have you ever planned to do something similar?

GB: I am familiar with these poems by Kipling. I have previously written an anthem around “A Song of the White Men” and an electronic song around “The Stranger.” The former was recorded a cappella by ten men in the studio, but unfortunately, I have no copy of that recording now. The latter was a techno-style song that didn’t really work so great in my opinion and I didn’t release it. Previously, I have adapted the poems “Might is Right” and “When America Goes Down” (Vik Olivir) to song. So yes, I am very open to putting music to great verse. Tomáš is one of my favorite vocalists and he is still making music today. I almost got a chance to meet him a couple of years ago when I was in the Czech Republic, but unfortunately, we couldn’t make it work.

OM: You composed a song “When America Goes Down” (Lyric: Vik Olivir). Where is the USA now? What do you think about the future of America?

GB: America is undergoing a controlled demolition. . . it is being deliberately deconstructed from within as a stage in globalization as no strong sovereign nation-states can exist. The death of America is an inside job.

OM: Do you farm? Have you gained autarkia?

GB: I have been organic farming for the past ten years, and raising chickens for eggs. In a climate this cold, achieving autarkia isn’t realistic nor my exact goal. But having a greater degree of food security, and knowing how to care for vegetable plants and chickens, is knowledge that takes time to develop, and is best embarked upon early in life. Later on, I could scale up my production if I needed to.

OM: How do you view Might is Right today? Does it have something to do with the Revolt Against the Modern World? You used parts of this book for your old music. The book has an interesting story from Stirnerian anarchism, through Nietzschean Satanism, to white nationalism and tribalism. Did you know that this is the oldest (1896) book banned from sale on Amazon?

GB: Might is Right was an important book for me at the time, as I was going through a process of rejecting my Catholic education. The tone and language of the book were electrifying to me. I can only imagine how shocking it would have been to read it in 1896! I heard a rumor that it was penned under pseudonym by Jack London, but further research proved this unlikely. I did not know that it has the special designation as being the oldest book banned by Amazon. That is quite the remarkable fact! Today, I do not view the thesis of the book as being correct. I understand from a materialistic, Darwinist viewpoint, that might makes right, but from a spiritual standpoint, I disagree with this premise. Total falsehoods can be imposed under a jackboot, and that might make them assert themselves as “right” by this authority, but it does not make them truth. Truth is part of Dharma and it is eternal and beyond the mistakes of fallen ages.

OM: Have you ever met Michael Moynihan personally? Do you listen to his music or read his books? Among others, Michael Moynihan edited Introduction to Magic from Evola and published other books with Stephen Edred Thorsson under the brand Arcana Europa.

GB: Yes, I have met Mr. Moynihan a couple of times, and interviewed him for the old Resistance magazine back in the mid-90s. His musical efforts with Blood Axis are indescribable and have the distinction of being a genre of their own. I read and enjoyed Introduction to Magic and may have never read Julius Evola if not for his guidance. He implored me to order Revolt Against the Modern World in 1995 and it is a book that changed my life.

OM: I saw you share a link to a book from Black Front Press by Troy Southgate. Have you read any books from Black Front, like The World Through a Monocled Eye or Return to Evola: A Fresh Look at Revolt Against the Modern World?

GB: I have not read any titles from Black Front Press, but support all efforts to introduce Evola’s thinking to the modern world.

OM: What is your opinion on the avant-garde art of the 1920s and 1930s? Surrealism, Dadaism, Futurism, Expressionism, etc.?

GB: Julius Evola made Dadaist paintings in his early carrier. I found it surprising that this type of artwork was done by Evola himself, as one might imagine that he would express more classical imagery and motifs. But of course, the Dadaist artwork does express the modern age with appropriately shocking visualizations.

OM: Evola translated into Italian and wrote an introduction to a very interesting book, The Angel of the West Window from Gustav Meyrink. Did you read it? Do you have any experiences with novels of initiation, occult novels, or Bildungsromans?

GB: I have not read Gustav Meyrink, but I am aware of his very creative and multilayered works. My favorite Bildungsroman novel would be Siddharta by Herman Hesse. This book was a great introduction for me to the ideas of Hindu/Buddhist thought and was a great precursor to Evola’s Doctrine of Awakening, the text that had the greatest effect on me, akin to initiation. I have read it ten times and counting.

OM: What do you admire about the works of Hermann Hesse?

GB: Hermann Hesse was one of the first authors to bring the Eastern teachings alive in a novel form, weaving the wisdom into story, which makes it highly accessible to Westerners. I especially love his colorful, poetic prose in Siddartha.

OM: Did you ever consider suicide? In the cases of Meyrink and Evola, a deep human crisis is associated with mystical experiences. They both considered suicide and then went on a spiritual journey.

GB: I have not ever considered suicide or had suicidal ideation. Perhaps because I was lit afire by a life-affirming cause at the age of 16, rather than first wallowing in nihilism, I escaped this unfortunate experience that grips many young people. I have an old friend who lost one of his daughters to suicide, and I can’t imagine how terrible it was for him. The way I see it, death is waiting for us all, it cannot be avoided as our inevitable fate, so why not enjoy the stages of life as they present themselves? It is all going to be over before you realize, anyway. No need to hasten the day.

OM: Would you change anything in your life?

GB: If I could change anything in my life, I would have had children at a young age. Otherwise no, I can live with my mistakes as part of my learning process.

OM: Are you also interested in the occult or tantra? Do you also read Evola’s books on this topic, Eros and the Mysteries of Love: The Metaphysics of Sex or The Yoga of Power?

GB: I have read both Eros and the Mysteries of Love and The Yoga of Power, and both books had a big impact on me. There are unmistakable forces locked within us that can be freed if one knows the way. Tantric sex, as one example, is the means of mastering sexual energies that normally overwhelms man. It teaches the methods of transmuting abyssal, radical forces into strength of personality and spiritual growth. The so-called “left-hand path” is easily misused by modern adventurers who pursue it as a thinly veiled expression of hedonism, but for the man who has mastered himself, it can be a way of revealing occult forces in an age where many paths have been obscured. 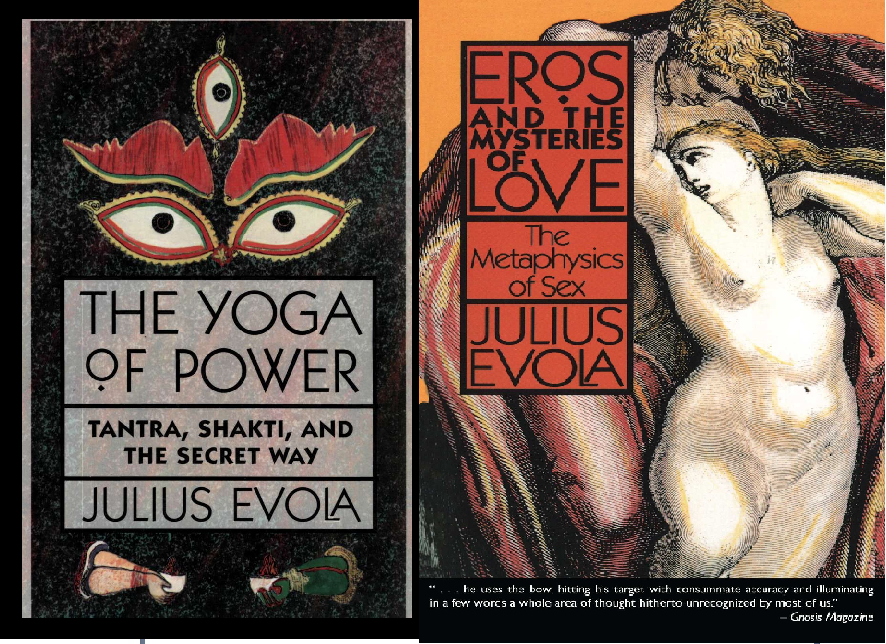 [3]OM: Do you have magical dreams, for example, dreams of gods, ancient songs, or anything else?

I have also had a recurring dream of a sort of divine council of elders who were judging my life.

OM: Do you watch the neofolk scene? On your last Uberfolk album, you covered “Waiting for the Fall” from Changes.

GB: Yes, I do keep an eye on the neofolk scene, and have always especially enjoyed Death in June. Miel Noir has recently teamed up with Changes to record an excellent rendition of a new Changes song “Defiance” that is very worth checking out. I consider Robert N. Taylor and Nicholas Tesluk to be absolute artistic giants. 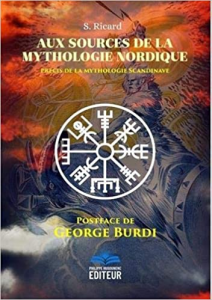 [4]OM: You wrote a postface for a book about paganism, Aux Sources de la Mythologie Nordique. What is about?

GB: My essay on paganism discusses how the gods were originally channeled as heightened states of being for the adept. The idea that they were literal personalities came later, and represent man’s attempt to understand the concept when we had fallen from our primordial state.

OM: Have you ever planned to record a concept album? What would be the topic?

GB: I was previously developing a science fiction idea for a novel and concept album, but after some time passed, I became rather uninspired by it, although I may revisit it one day. Set thousands of years in the future, a spaceship full of humans that have been colonizing distant planets finally returns back “home” to Earth, to find that humanity has fallen into a state of degenerate entropy. Part biological, part machine, these future humans have lost the essence of being human, conquered nature, and are ruled over by a disgusting hedonistic oligarch class that dwells behind walls in vast city-states, while the rest of humanity lives in a primitive state outside the gates. Following their guidelines of when to colonize a planet, they conclude from observing the situation on Earth that the planet must be scorched and repopulated. This leads to a crisis of sorts for the visitors.