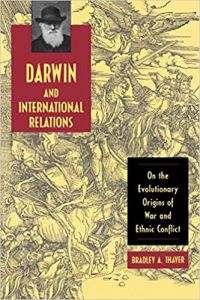 Bradley A. Thayer
Darwin and International Relations: On the Origins of War and Ethnic Conflict
Lexington, Kentucky: University of Kentucky Press, 2004

Every summer it happens. Warriors head out to meet their foes on the field of battle. These fighters tear each other’s bodies apart in one-on-one combat. They also summon reinforcements, deploy in complex formations, and use strategy. These warriors are ants. Ants wage warfare so aggressively and commonly it is thought that if they had hydrogen bombs, they’d destroy the Earth in the course of a summer afternoon.

Ants, humans, chimpanzees, bottlenose dolphins, and many other species go to war against their own kind in some organized way. Chimpanzees patrol, give battle, and conduct ambushes in the same way soldiers do today. Professor Bradley A. Thayer argues that warfare is a product of natural selection and this can be explained by evolutionary theory.

An ultimate causal explanation for warfare based on evolutionary theory begins with the recognition that warfare contributes to fitness in certain circumstances because successful warfare lets the winner acquire resources. For evolutionary biology, a resource is any material substance that has the potential to increase the individual’s ability to survive or reproduce. As such it may be food, shelter, or territory, especially high-quality soil or wild foods. (p. 107)

Wars are fought for several reasons. These reasons apply to primitive tribes in South America as well as high tech nations:

I thought the idea about access to females was interesting. It is known that successful warriors “get the girl,” so to speak. It could be that the baby boom of the 1950s was due in part to so many American men successfully serving as soldiers in World War II — American women thus naturally paired off with them. Additionally, the ancient Irish warrior chieftain Niall of the Nine Hostages [7] and his male relations have many living descendants today.

You can buy It’s Okay to Be White: The Best of Greg Johnson here. [9]

However, access to females is a conditional thing. One doesn’t want a wife who has sympathies to a rival tribe, and one doesn’t want the children to be of a downward-trending racial admixture. The Ottoman Turks looked for white women in the Balkans and steppes to their north. They had access to African women through the Arab slave trade in Zanzibar, but they didn’t breed with them. Likewise, while the Bible has a verse [10] encouraging a warrior to wait a month before having sex with a woman he captured in battle, there are more passages about not marrying [11] Canaanites [12] or being “unequally yoked [13].” This brings to mind the drama caused to Abraham by Hagar and their child Ismael. The only politically stable and nice parts of South America are the parts where Spanish and Portuguese conquistadores married European women.

Men will always be the key warriors. Female soldiers are an expensive trinket at best. The reason is the different reproductive strategies of the sexes. The men must show some sort of worth, and military service is always worthy, and women need to be protected. Career military women often don’t have children.

Another big evolutionary factor in warfare is disease. The Europeans conquered the Americas in part because their bodies were more resistant to diseases that the Indians had no natural immunity to. The Spanish arriving in Hispaniola in 1492 were descended from people who’d survived earlier pandemics and passed on their immunity to their children. The Europeans also set up outposts in Africa as early as the 1500s, but had difficulty settling the area for the opposite reason: they were not resistant to African maladies.

If you are reading this article, one is aware that ethnic conflict is a major driver of social dilemmas. An ethnic group is a group of people who believe they have a common set of ancestors. In the northern United States, many people — even those with non-Anglo names like Olaf and Pasquale — can trace their roots to the Mayflower passengers or Daniel Boone’s family and militia followers. In the southern states, many whites trace their roots to families such as the Lees of Old Virginia [14]. In the Deep South, there is probably a connection to the early English colonists of Barbados [15].

Ethnic conflict can be primordial, meaning that it arises naturally from within a particular tribe – i.e. “ancient hatreds.” Or it can be modernist, meaning that it arises from external factors. For example, national feeling didn’t arise in the Austrian Empire until after the printing press, public transportation, and advanced economic activity arrived.

There is probably a “middle way” truth between the primordial and modernist theories of why ethnic conflict occurs. Regardless, ethnic conflict is here to stay. Thayer argues that one way to suppress ethnic conflict is to expand the definition of who is a citizen of the nation. American Establishment propaganda since the 1960s has done a great deal to include Sub-Saharans as major contributors to the American project although this effort is only partially successful.

Today the United States is in a low-grade civil war and one can see a Darwinian aspect to it. At issue is the Scramble for America – or more accurately the access to Anglo whites. Anglos have created a society whose walls contain money-giving ATMs, whose industry can churn out fleets of bombers, and whose suburbs can provide valiant white men to serve as crews for those bombers. Non-whites that get access to this society get clean water, a wealthy population to rob, and access to a political system that can send those bombers against their enemies in their homelands.

These non-whites waging this war use mattoid whites, such as those in Antifa, and well-meaning status signaling whites as allies. Additionally, they are using a mind virus — the “civil rights” narrative and the illicit second constitution, the Civil Rights Act of 1964 — against whites. With that in mind, the very definition of weapon is broader than hypersonic missiles or assault rifles. Narrative matters. Law matters. Additionally, important territory isn’t just a place like Gibraltar, it’s also the food pantry, welfare office, and US Justice Department.

To reverse this trend, whites must figure out a way to counter the reigning narrative, deny non-white access to white systems, pick apart underground centers of power hostile to whites, and otherwise turn things around. Darwinism shows that there is no way out of this conflict but through.