The Ways of the World 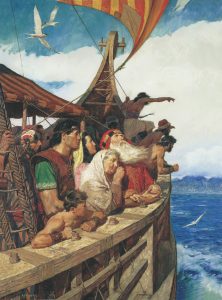 My views on faith and spirituality have matured as I have gotten older. But when I was a teenager, heavy metal was my life and my religion. Unfortunately, this led to conflicts with my father as he returned to the Mormon Church. Despite rebelling against my father and the Mormon Church, I gained some important insights on human nature, self-reliance, and perseverance. These lessons can help the Dissident Right build communities across religious lines while still maintaining our personal views and beliefs.

My father came from a broken home in Idaho. Thankfully, the Mormon Church provided food, clothes, and support through church activities and youth groups. In many ways, the Mormon Church treated my dad better than his own family did. For various reasons, my dad stopped attending the Mormon Church as an adult. He eventually found a career as a police officer and married my mom. While I was baptized as a baby, my family never attended church regularly. All that changed when I was 12 years old.

As I was practicing my guitar one day, my father came into my room and told me that he wanted to take me to the church he grew up in. He then told me about the history of the Mormon Church and how they kept an important “secret.” Long ago, there was a war in heaven between angels and demons. The angels had white skin and the demons had dark skin. After the angels won, the demons were cast down into a barren wasteland. The Mormon Church believed that Africans were the descendants of the demons and that is why they committed so much crime. This story caught my interest, as I wanted to meet other people that knew about this secret. However, my father explained that due to political reasons, the church had to hide this secret and let Africans into the priesthood in 1978. This is one of the reasons why he left the church as an adult. Nevertheless, growing up in the church taught him a lot of life lessons that he also wanted me to learn and experience.

The next day I went to the Mormon Church for the very first time. After a general meeting in the main room, my father went to the men’s group while I was put in a classroom with the other boys in my age group. Some of the boys knew me from school as the heavy metal kid that didn’t have any friends. After the initial introductions, they started talking about abortion. This was my chance to let them know that I also knew about the secret. I told them that without abortion, there would be much more “demon” minorities committing crimes and that any sane father would get his daughter an abortion if she were raped. After all, no one would want to raise a mulatto demon grandchild. The room went completely silent. Didn’t their dads tell them about the war between the angels and the demons? Apparently not, as I was immediately taken out of the room and brought to my dad to explain my choice of words.

When the teacher met my father and found out that he was a police officer, things turned awkward very quickly. A church member at this branch had just been arrested for inappropriate actions with a minor. This happened only a few days before my father brought me to the church. The teacher tried to ask my father if he was a real LDS member or not, but he was too scared and intimidated by my father to get the words out of his mouth. The Sunday school teacher then took me back to the class and asked me to keep my opinions to myself. After returning home, I told my dad that I didn’t like the church and that I didn’t want to go back. Unfortunately, my father was set on becoming active within the church again. As much as I begged, argued, and fought my dad, I had to go to church with him every Sunday. This was when I became a rebellious teenager.

I hated going to church. I didn’t get along with any of the people there. None of the teens my age listened to heavy metal and they all knew that I didn’t share their faith and beliefs. Most of all, I hated the way they treated my dad. My dad was always considered an outsider to them. They didn’t have the balls to confront my father on his views and opinions, but I could tell that they looked down on him. I tried to tell my father that they didn’t accept him as one of their own. I tried to tell my dad that the modern Mormon Church was different than the Mormon Church he experienced in Idaho growing up. Why respect a community that doesn’t respect you?

During the five years that I attended the Mormon Church, I learned a lot about their community. If a religion is a product of its time, then Mormonism can be viewed as a pioneer religion that promoted strong communities with individual responsibility. For the average Mormon, life revolved around the Mormon Church. Youths groups held morning bible-study classes before high school. There were social activities for different age groups throughout the week that were held at the church and at different homes. After going on the obligatory missionary trip, many Mormon men got engaged and married within the church. Being part of the Mormon Church gave its members a community and a social circle.

When you think of Mormons, you often think of polite, happy, and successful white people. Their success and personalities do not come from magical plates translated by Joseph Smith. Their behaviors come from the culture they create and the life lessons they teach in between the sermons. Lessons on avoiding credit cards teach financial responsibility. Having different classes for men and women enforce gender roles while teaching valuable skills like cooking and home repair. The Mormon Church is also concerned about the pressures and temptations of modernity, which the Mormons call “the ways of the world.”

Within the five years that I went to church with my dad, he started to notice that the values of the Mormon Church were slowly being eroded by political correctness. Church elders could no longer tell the young adults to stick to their own race. They could no longer criticize people for having children out of wedlock. They spent so much time preaching to Tongans and Samoans that they ignored the demographic problems occurring in their own churches back home. The Mormon Church was a religion of white settlers and they can only maintain their identity with those demographics and those values. The Mormon Church is not even sustainable without white people. Do you think that Jamaal and Mohammed want to become missionaries? If I wasn’t opening my door to white missionaries, you better believe I’m not opening my door to demons and monsters.

As much as I hate to admit it, I learned some valuable lessons from my time attending the Mormon Church. I learned about fiscal responsibility and self-reliance. I also learned about the importance of dedication and perseverance. Most importantly, I learned that God helps those that help themselves. Some may find this concept counter-intuitive or cynical, but having faith in a higher power also means having faith in yourself and doing everything in your power to get the desired outcome. And whether people like it or not, I always try to have a positive outlook on life. After attending the Mormon Church for a few years, it just rubbed off on me. Such is the way of the world.

A few days ago, YouTube deleted the channels of Millennial Woes and Way of the World. They were de-platformed for their beliefs and for standing up for our people. In some ways, we are like the Mormons of the 19th century. After endless persecution, the Mormons decided to journey through the wilderness in search of a new home. They faced numerous hardships and struggles, but they eventually found a home of their own. Whereas Mormons were persecuted for their religion, we are persecuted for our race. No matter how many Coca-Cola training videos we watch, we are still going to be white. Although each person in the Dissident Right has their own faith and beliefs, we can put our differences aside to come together and strengthen our communities. Regardless of religion, we are all trying to stand up for our identity, our rights, and the lands of our fathers.

After my father passed away, I never returned to the Mormon Church. If man is a computer and religion is an operating system, then the Mormon Church was never meant to run on my hardware. Heavy metal was my religion as a teen, but that was always an implicit gateway to European mythology, heritage, and identity. Ironically, some of the heavy metal musicians I worshipped as a teenager became Christians as they got older. Even within our community, some of my best friends are Christians. So whatever religion you believe in, I hope that you can follow the Mormon example of finding success and happiness in your life. God helps those that help themselves. So let’s help each other take back our homelands. Such is the way of the world.

« Grace Under Pressure: Life as a Thought Criminal