The Smartest Damn Boy in All of Baltimore 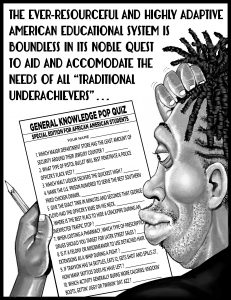 “Think of how stupid the average person is,” comedian George Carlin once told an audience, “and then realize half of ’em are stupider than that.”

Since I’m an innately kind soul who abhors cruelty in all its forms, I won’t instruct you to think of how stupid the average Baltimore public school student is, because even to ponder the issue might send you hurtling down a mental abyss from which you may likely never escape.

But there is an unnamed Baltimore teenager — he’s black and has a stupid haircut, that much is confirmed — who only passed three classes in all four years of high school and STILL wound up ranked number 62 out of 120 total students. His cumulative GPA at the end of four years was a measly .013 — and yet there were 58 pupils at his school who couldn’t even crank out a fucking .013.

Think of how stupid you have to be to pass three classes over four years and fail ALL of the rest — and then realize that almost exactly half the students in your graduating class are stupider than that.

Over four years, this young black male with such terrifying potential that this white-supremacist society keeps snuffing out at every turn was late or completely absent a staggering 272 times. When he wasn’t aggressively failing his courses, he managed to pass one English class, one class called Fundamentals of Art, and one Health Ed class. Assuming that Fundamentals of Art requires you do little more than identify the primary colors and that Health Ed requires you to show up in gym shorts every once in a while, this young black male really only passed one academic class — and since this is Baltimore and the topic is English, I’ll go out on a limb and assume he passed the class merely by being able to pronounce the word “English” correctly.

Cut to the ominous closeup of the Angry Black Mother as she stares at the camera, pissed-off at the world for failing her son. Tiffany France is the mom of the nappy-haired Boy Dumbo who only passed three classes in four years of high school. She also says she is “probably going to start crying” after realizing that her son, after attending four years of school, is now being sent back to the ninth grade to start all over again. She claims to work three jobs and insists that the school, over the course of four years, never notified her that her son was failing nearly all of his classes:

So it’s not your son — the one who showed up late or played hooky 272 times and only passed three classes in four years — who is the failure. It’s the school’s failure. If they’d only sent da damn mentors to help him, he’d be the smartest damn boy in all of Baltimore. Interesting take there, lady.

Little Boy France’s school, the Augusta Fells Savage Institute of Visual Arts in West Baltimore, is named after a black female sculptor who seemed to specialize in sculptures of black people in various states of emotional distress. Miz Savage would likely be turning over in her cocoa-butter-scented grave to learn that in 2006, her namesake school was singled out as one of the seven lowest-performing schools in a city system that boasts 188 public schools, with hardly any of those 188 worth braggin’ about in the first place. It’s also a system that attempts to educate a student body that is slightly more than TEN times as black as it is white.

A 2020 U.S. Census Report found that of the 100 largest school districts in the country, Baltimore has the fifth-highest level of funding per pupil. Students there have $17,493 tossed their way every year, compared to a national average of $12,612. So Baltimore schoolchildren get nearly 40% more funneled toward their education than the average American kid does, but they still don’t know how to tie their shoelaces or spell their own names after a dozen years of public schooling.

So much for your whole “poverty causes stupidity” thesis. I’m pretty sure you have that one backward.

I get angry. There’s nothing but frustration. We see on the news the crime that occurs, the murders, the shootings, we know that there are high levels of poverty in Baltimore. Things like this are adding to that. His transcript is not unusual to me. I’ve seen many transcripts, many report cards, like this particular student.

A pair of writers for the Brookings Institution say that “SAT math scores mirror and maintain racial inequity” instead of the barkingly apparent answer, which is that structural inequities are the inevitable result of biological inequities. While admitting that “Black and Hispanic or Latino students routinely score lower on the math section of the SAT” than white and Asian students do, they say this is “a likely result of generations of exclusionary housing, education, and economic policy” rather than the result of smart people wanting to exclude dumb people from their neighborhoods.

A writer for the Washington Post avoided the obvious answer — the students in Baltimore public schools are as dumb as black mold on an abandoned surfboard — and instead blamed low test scores in “marginalized communities” on the alleged “inequity baked into the funding system”: “Add to that the effects of the national uprising for racial justice, sparked by the death in police custody of George Floyd, an unarmed black man in Minneapolis.”

OK, I just added George Floyd to the equation. Sadly, that addition didn’t add any total points to black test scores. Going into full gaslight mode by calling the idea that academic performance can be gauged accurately by standardized testing an “obsession” and a “mania”, the same Post scribe says that them there tests don’t mean nuthin’ no way:

“It didn’t matter that testing experts repeatedly warned that using scores for these purposes was not valid or reliable. . . .”

Who are these “testing experts”? More importantly, what qualifies someone to become a “testing expert”? Did they have to, like, take some kind of test?

And hey — what do those evil tests tell us, anyway?

It’s obvious that we now live in a society hell-bent on eliminating anything that makes black people look bad, so now the new movement in education is to downplay the importance of testing. The consistent test results, replicated everywhere over generations, are clearly racist.

A recent report from the National Center for Fair and Open Testing claims that 85% of America’s top liberal arts colleges will not require a student’s standardized-test results during the admissions process. This same no-test-required policy is now being practiced by every Ivy League school except Princeton — it’s obviously the only way to cram more blacks into our nation’s loftiest institutions of higher learning.

Imagine a nation — one of the mightiest in world history — allowing itself to crumble to dust due to no other reason beyond its stubborn refusal to admit that whites are not superior at basketball.

Substitute “blacks” for “whites” and “basketball” for “intelligence tests,” and that’s America in 2021.

Rather than admitting the obvious problem, we have a society determined to close its eyes, rush forward, and commit seppuku on Occam’s Razor.

« Counter-Currents Radio Podcast No. 329 Ask Me Anything with Greg Johnson