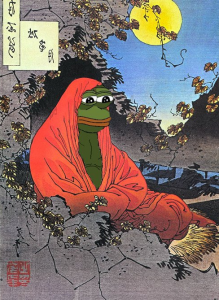 As a white man in the modern world, you are programmed to self-destruct. As dissident artist Owen Cyclops [2] puts it, “our people have been taught that they’re bad, so they’re killing themselves in record numbers.” Of course, suicide is the most extreme expression of this, but the same basic spiritual sickness can be seen in a variety of phenomena, from the opioid crisis to alcoholism [3] to many whites’ embrace of the constant attacks on white identity. Buddhism teaches that life is suffering, but there is a more productive way out of suffering.

Readers may associate meditation and Eastern religion with the Left, and understandably so. Meditation and the associated religious traditions were popular with the hippie movement of the 1960s and the musicians of that era. The Beatles traveled to India to study Transcendental Meditation with Maharishi Mahesh Yogi, as did Mike Love of The Beach Boys, while several members of The Doors also had an interest in the practice.

In the US today, practitioners of Eastern religions overwhelmingly [4] “lean toward or identify with” the Democratic Party, with only 16% of Buddhists and 13% of Hindus expressing a preference for Republicans. This is not only a matter of many of these people being Asians, a left-leaning demographic in the US. Left-wing thinking is common among white Buddhists [5] as well.

But there is nothing inherent to meditation itself that necessitates such views. Indeed, dissident commentators such as Tara McCarthy [6] and Robyn Riley have endorsed the practice, and even anti-egalitarian writer Jim Goad, generally opposed to religion, has praised [7] Zen Buddhism. There are several ways in which meditation can assist in the struggle for a positive national identity and the broader revolt against the degeneracy of the modern world.

Meditation is not a single technique; there are a variety of practices that vary somewhat in their effects. But they all involve some method of deliberately quieting the practitioner’s usual internal monologue, mainly while sitting in silence.

Although a great variety of claims have been made about the effects of meditation, modern science has provided clear evidence for only a few. One of these is the response to stress, which is obviously relevant to the current struggle. Research that monitors brain activity and physiological signs of stress shows that those with more experience in meditation are more resilient under stress, both physical and mental. 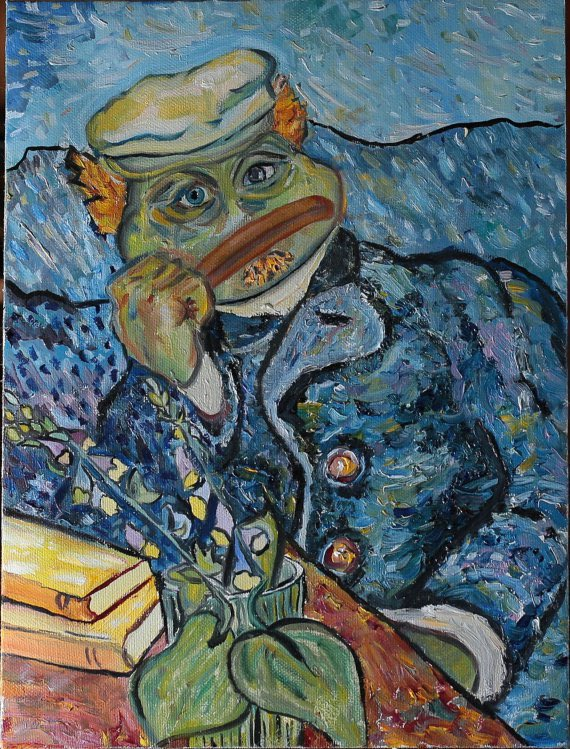 Olga Vishnevsky [9]‘s depiction of a typical white man in the current year.

Psychological stress has been induced in a lab setting by, among other things, showing study subjects gruesome imagery. Those with more experience in meditation showed less activity in the amygdala, a part of the brain responsible for the fight-or-flight response. There were apparent long-term changes in their brains that would explain this; they had stronger connections between the prefrontal cortex, an area involved in emotional self-control, and the amygdala. [1] [10]

Research on meditation and physical pain shows something similar. Experienced practitioners of Zen meditation showed not only a higher pain threshold but also psychological detachment, as if “while their sensory circuitry felt the pain, their thoughts and emotions did not react to it.” [2] [11]

This stress resistance is obviously valuable for life in general, but is particularly helpful from the point of view of dissidents who face the added stresses of censorship, social ostracism, and in some cases legal persecution. The ability to keep one’s composure under stress is not only beneficial to the individual practitioner but tends to inspire respect in others. This is valuable in itself as well as helpful in countering the mainstream’s demonization of dissidents.

Meditation is also useful in fighting the emasculating trends of the modern world. Even after adjusting for various health factors, testosterone levels in men have declined [12] by about 1% per year between 1987 and 2004. The causes of this are complex and not entirely understood, but the consequences are clear enough. As the physiological basis of masculinity declines, men increasingly lack spirit. They lose pride and dignity, and begin to resent others who retain these traits. The inversion of healthy values we can now see in society, including the glorification of jealousy and insecurity, is partly a reflection of this.

There are at least two ways in which meditation can counteract this loss of vitality. Firstly, as discussed above, it builds resistance to stress, and stress is one cause of low testosterone. Second, it encourages good posture. Although one can practice in any position, it is traditionally done in a sitting position with the back held straight. There is evidence that a related type of posture [13] increases testosterone, in contrast with the slouching posture which is the default for many. Specifically, an upright and “expansive” posture known as “power posing” tends to increase feelings of power and confidence, which are some of the psychological effects associated [14] with testosterone.

Finally, although the existing science does not address this directly, meditation can help break social conditioning. A good analogy for this is the concept of the “fnord [15],” which was popularized by the late American writers Robert Shea and Robert Anton Wilson in their Illuminatus! Trilogy. The idea is that the population is conditioned from a young age to respond in a particular way to a word inserted into various pieces of text by the authorities. They are trained to suppress every memory they have of seeing this word, but to nonetheless have an emotional reaction whenever they encounter it. If they find a fnord in a news article, they will have a feeling of great anxiety connected with the events described and be unable to think critically about them. There are no fnords to cause such distress in advertisements, as the authorities would not want to make people uneasy about consumption.

The fnords allow the authorities to restrict thought to maintain a great degree of power over most people. However, it is possible for some people to be deconditioned, allowing them to perceive the fnords without panicking. This is where meditation comes in.

Presumably, the concept of fnords is not literally accurate. However, the population of every Western country certainly is conditioned, largely through propaganda, to have a strong emotional attachment to particular views and a great fear of dissent from them. These views include anti-white attitudes that encourage self-loathing and weakness in white people. One historically-claimed benefit of meditation is an improved ability to let go of emotional attachments. Thus meditation may lead to liberation from unhealthy norms and the illusions they depend on.

There are of course countless negative influences in our environment, but the reason the white race is facing dissolution is deeper than any of this. We are in danger because we are spiritually weak, and will continue to face the same difficulties until enough of us attain the necessary spirit to assert our own interests and commandeer our own destiny. Meditation is one way to achieve this.

Don’t forget to sign up [18] for the weekly email Counter-Currents Newsletter for exclusive content, offers, and news.