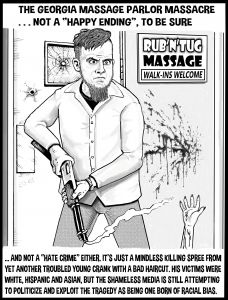 If there’s anything to be learned from the shooting sprees at three Atlanta-area massage parlors on Tuesday afternoon that left eight people dead, it’s that the massage-parlor industry is disproportionately Asian to a degree that would be comical if, you know, it hadn’t led to this unacceptable tragedy.

Since the shooter is white, WHITE SUPREMACY became the immediate narrative. Almost immediately, people were spreading an obviously forged Facebook post from the killer where he blames China for “the COVID coverup” and calls China “THE GREATEST EVIL OF OUR TIME.”

To be fair, six of his eight murder victims were Asian women. Then again, he also killed a white woman and a white man. He also injured a Hispanic man who survived.

A Google search for “Asian massage” yields over 32 million results, far surpassing the next closest type of massage that can be linked to an ethnicity, which was “Swedish massage” at just over five million results. But when you search for “types of massage,” the Swedish method shows up on every list, but “Asian massage” never does. Every so often, they might list shiatsu or “Thai massage,” but that’s it.

Therefore, you can forget about the fact that 87.5% of Tuesday’s massage-parlor murder victims were women. Even as women-compliant as mainstream culture is these days, they ignored this fact and instead fixated on race.

Tuesday’s rampage started shortly before 5:00 PM on Tuesday at Young’s Asian Massage in Acworth, Georgia, about 30 miles north of Atlanta. It left two Asian women dead. It also left a white man and woman dead, but you rarely hear a peep about that in the headlines. The shooter also injured a Hispanic man who was rushed to the hospital.

About an hour later in the normally posh Atlanta neighborhood of Buckhead, three Asian women were shot dead at Gold Spa, and one Asian woman was killed at Aromatherapy Spa across the street.

A couple of hours after that, police apprehended 21-year-old Robert Aaron Long of Woodstock, Georgia about 150 miles south of Atlanta. They say he told them he was headed to Florida to shoot up more porn-related businesses.

Long has reportedly confessed to the killings. And according to authorities, Long says a “sex addiction” motivated his spree, not racial hatred.

He apparently has an issue, what he considers a sex addiction, and sees these locations as something that allows him to go to these places, and it’s a temptation for him that he wanted to eliminate. . . . These locations, he sees them as an outlet for him, something he shouldn’t be doing. . . . He was fed up, at the end of his rope. . . . He had a bad day, and this is what he did.

You can imagine the field day the press and the full-time social-media white-supremacy-blamers had with the “He had a bad day” comment.

Cherokee County Sheriff Frank Reynolds said that Long “may have frequented some of these places in the past” and “might have been lashing out.”

There was incessant carping about how Long’s mug shot shows he was apprehended unscathed — this was offered as proof that he was treated with kid gloves because he was white instead of the statistical fact that whites tend to resist arrest at far lower rates than blacks do.

Asians don’t tend to resist arrest much at all — which may be related to the fact that they don’t tend to commit much crime, at least not compared to other races.

The news of Long’s confession and explanation of his motives came roughly 12 hours after his shooting spree hit the national news, and the outlets who weren’t blaming it directly on “white supremacy” and at least had the decency to say that a clear motive had not yet been established still felt compelled — down to the very last news outlet — to note that the murders came amidst a national wave of anti-Asian violence that nearly every media outlet is too timid to note has largely been perpetrated by black assailants — the culprit was “white supremacy” there, too.

After Long claimed a sex addiction motivated him rather than racial hatred, those who NEED it to be racially motivated are scoffing and saying, “Why trust a murderer?”

Something tells me they would have trusted him if he said he was motivated by racial hatred. After all, they claimed to know his motives before he even opened his mouth, so why would they renege on their confirmation biases if it turned out that he went out of his way to confirm them?

Although I’m sure they are trying their very best to the point where they’re standing on tippy-toes attempting to Swiffer up one mildly bigoted speck of dust from the cobwebbed shelves of Long’s online history, no one has yet produced any evidence of Robert Aaron Long showing any animus toward nonwhites.

His online track record, however, shows a consistent commitment to Christianity.

An unnamed student who graduated along with Long from Sequoyah High School in 2017 said:

He was very innocent-seeming and wouldn’t even cuss. . . . He was sorta nerdy and didn’t seem violent from what I remember. He was a hunter and his father was a youth minister or pastor. He was big into religion.

Another ex-classmate said Long carried a Bible with him every day and described him as “super nice, super Christian, very quiet. . . . He went from one of the nicest kids I ever knew in high school to being on the news yesterday.”

Long attended the Crabapple First Baptist Church in Milton, GA. A 2018 video from the church’s Facebook page shows him making the following testimonial:

The [prodigal] son goes off and squanders all that he has and lives completely for himself and then, when he finds he’s wanting to eat pig food, he realized there’s something wrong and he goes back to his father and his father runs back to him and embraces him. . . . And by the grace of God I was able to draw the connection there and realize this is a story between what happened with me and God. I ran away living completely for myself, and he still wants me, and so that’s when I was saved.

If you ever doubted that the Powers That Be see whiteness, not Christianity, as the enemy, this is your case. After all, there are too many black, Hispanic — and Asian — Christians in the USA to make Christianity an acceptable target these days. And many of the black ones are politicians or at least political commentators.

Just as there wasn’t a scintilla of evidence of “racism” in George Floyd’s death, there was none here, either. But it doesn’t matter anymore.

A new unwritten rule in American culture: If a nonwhite suffers in any way at the hands of a white, it is BECAUSE they were nonwhite. Even to question this rule makes you complicit in the suffering.