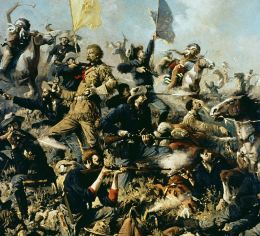 American history was always taught to me in a way that shamed and vilified white people. Despite all the efforts and propaganda to make me feel sorry for the Native Americans, I always resented them for their attacks on the European colonists and settlers. Even some of my favorite metal bands wrote songs that romanticized the Indians while forgetting the horrific acts they committed. Nevertheless, the works of Louis L’Amour gave me a different perspective on American history. His frontier stories portrayed white men as heroes in a way that modern nationalists and dissidents can relate to and enjoy.

In elementary school, the Indians were portrayed as noble warriors while the European colonists were portrayed as ignorant and incompetent. When learning about the colonies, they would skip over certain events like the Jamestown Massacre. On March 22, 1622, the Powhatan Indians attacked the Jamestown colony and killed 347 European settlers. With their crops destroyed, over 500 settlers died of starvation within the next few months. When I mentioned these facts and concerns, my teachers either ignored me or responded with politically correct answers that tried to justify these events. Regardless, I was glad to discover that the Virginian colonists got their revenge by poisoning 200 Powhatan Indians at an alleged “peace talk” a year after the Jamestown Massacre.

I understood that the European colonists and settlers were encroaching upon a foreign land that other people were already living on. Even as a kid, I struggled with the reasons and justifications for European expansion. In many ways, I wished that my grandparents and all the European settlers before them never came to America. However, the thought of dark-skinned savages killing white colonists and settlers always made my blood boil. Even if they were invading another continent, my sympathy always went to the European settlers. Sadly, this sympathy was not shared by some of my favorite heavy metal bands.

Iron Maiden’s first single from The Number of the Beast was “Run to the Hills.” The lyrics describe the European colonization of America. The first verse is written from the perspective of the Indians and the second verse is written from the perspective of an American cavalryman. Although I appreciate the fact that both sides are portrayed in the lyrics, the third and final verse accuses the European settlers of “raping the women” and “enslaving the young.”

What most people seem to forget is that the Indians were doing these things to each other long before the Europeans came. One such example is the Crow Creek burial site that dates back to the 14th century. Over 400 Indians were killed and put in this mass grave. Another forgotten truth is how various Indian tribes sided with the European colonists to kill other rival tribes. The Mystic Massacre occurred on May 26, 1637, when Mohegan and Narragansett allies joined with the colonists in Connecticut to kill over 600 Indians of the Pequot tribe. So while I still enjoy seeing Iron Maiden in concert and hearing “Run to the Hills” as an encore, I will save my breath and sing along to the second verse only.

Although I have seen Anthrax in concert, I was never a fan of their music or their politics. One of their most popular songs is called “Indians.” The lyrics complain that people only see “black and white” while depicting the Indians as innocent pacifists. That was not the case when the Mohawk Indians killed over 90 French settlers near Lachine in 1689. The lyrics go on to explain that the Indians “love the land and fellow man.” The Yamasee Indians did not have much love for their fellow man, as they killed over 100 white settlers in South Carolina in 1715. If we only see black and white, it is because our enemies always see us as white and attack us for being white. The chorus of the song demands that we “cry for the Indians,” but they will only get crocodile tears from me.

While “Run to the Hills” and “Indians” were both songs from the 80s, the 90s reached a new level of Indian worship with Dances with Wolves. My family had this film on VHS, and I watched it numerous times as a kid. The acting, cinematography, and music of the film have aged well. The historical accuracy of the film is another story. The film portrays the Sioux as peaceful people while portraying the Pawnee and the white men as pure evil. In reality, the smaller Pawnee population was often the victim of the larger Sioux tribes. The northern Sioux tribes were also responsible for killing over 600 settlers and soldiers during the US-Dakota War of 1862. While I still enjoy watching Dances with Wolves, I have more sympathy for the buffalo than the Sioux.

The spirit of the buffalo seems to have inspired Manowar to write “Spirit Horse of the Cherokee.” Manowar is one of my all-time favorite bands, but even I can admit that the lyrics of this song lack nuance. The song declares that “the white men came to trade and borrow but then they would not leave.” The Killough family were never given the chance to leave, as the Cherokee Indians killed 18 members of their extended family on October 5, 1838. The song also talks about slavery but forgets to specify who was enslaved. Not only did the Cherokees enslave captives of the neighboring tribes, but they also owned over 4,000 black slaves by 1860. I really like the song, but the lyrics are as subtle as a deaf Indian arguing with US soldiers at Wounded Knee.

The Wounded Knee Massacre of 1890 was one of the last major conflicts between the US military and the various Indian tribes. By this time, most of the Indian tribes had already surrendered to the US government and had agreed to live on designated reservations. While most modern Indian reservations in the US are stricken with poverty, many tribes have been given the right to have casinos on their territory to support and employ their people. Less than 200 years ago, Indians and white settlers were killing each other. Up until the COVID lockdowns, their descendants were dealing blackjack and spending their social security checks on the spirit of the slot machines.

Part of me wonders which group will have the last laugh. What would Sitting Bull, Crazy Horse, and Geronimo think of the white man and modern America in 2021? Personally, I think they would laugh at us. Elderly Asians are being targeted by black criminals, but white people get blamed for the attacks. Thousands of illegal aliens are now invading our borders, but if white Americans complain about it, they are labeled as “racists” and “white supremacists.” Moreover, the COVID lockdowns are destroying our economy and our lives. The colonists, settlers, and cowboys may have won the West, but their descendants are slowly losing it. How do we get it back? Perhaps a storyteller of the Old West can help us find a path towards a future frontier.

Louis L’Amour was born on March 22, 1908. During his lifetime, he wrote over 80 western novels that he called “frontier stories.” These stories followed cowboys, outlaws, and settlers as they forged their own life on the American frontier. His protagonists were masculine white men that survived the wilderness, fought the Indians, and stood up against the government and its corrupt officials. While some would call his writing style “formulaic,” I always felt that L’Amour knew his audience and gave them exactly what they wanted. Whereas the book industry has become increasingly feminine over the last few decades, L’Amour wrote books about white men for white men. I don’t have all the answers, but if you have ever considered moving to a rural area away from the cities, reading L’Amour’s books will give you some history, entertainment, and inspiration for the new frontier of your life.

I recommend starting with To Tame A Land. If the Western genre is not your cup of tea, then I recommend The Walking Drum, which is set in Europe in the 12th century. I got into L’Amour’s books after playing a western-themed role-playing video game called Wild Arms. If anyone has enjoyed the Red Dead Redemption series, I recommend L’Amour’s books on the Sackett Family. Although I wouldn’t categorize L’Amour as a writer of the Dissident Right, his novels have a lot to say about men, women, Indians, and the realities of human nature. Whether you are a Sackett or a Shoshoni, we all prefer our own tribe. And all tribes deserve a homeland of their own.

My views on the Native Americans have matured over the years. While I resented them in my youth, I realize now that the history of mankind has always been the perpetual struggle for land, resources, and sovereignty. The Indians fought each other before the Europeans came to North America, and they fought the European settlers as they expanded westward. For various reasons, these settlers defeated the Indians and won the West. White men today are losing the West, but unlike the Indians, no one will be giving us reservations to live on. By reading the frontier stories of Louis L’Amour, we can take inspiration from the past while forging our own paths and homelands for the future.

No Government Subsidies For You, Whitey »